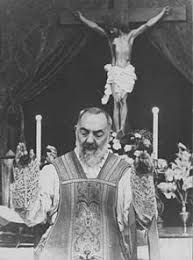 A brief note on this Sunday, on which I normally do not write, but make the occasional exception: For today is the 50th anniversary of the death of Saint Pio of Pietrelcina, more commonly ‘Padre Pio’, a saint who worked miracles of the most astounding variety, reading souls and hearts, and was in touch with the supernatural in a very vivid way, all this in what we would call the modern era of scientific verification.

There is much more to say, of course, and how the good priest provides a model for all priests in terms of fidelity, prayer, work ethic, sacramental work, especially Mass and Confession and just his overall holiness. We could use just an ounce of his faith, and, with the Saint Jean Vianney a century before, a few priests like him could take down the devil’s kingdom, or at least deprive him of souls.

And a faithful reader pointed out an error in my writing, which I am happy to confess: That I used the term in a recent column ‘brass tax’ when, of course, it is ‘brass tacks‘, (I suppose I had our crushing tax burden on the mind as well as the shoulders). The derivation of the phrase is obscure, traced apparently back to Texas in 1863, as the Civil War was raging northwards. It seems either to come from measuring cloth by pinning one end with brass tacks, instead of eyeballing with one’s arms (if that is not a mixed metaphor); or from spelling out the name of a deceased on a coffin with such tacks; or, my favourite, a Cockney rhyme, a la My Fair Lady (or more properly, George Bernard Shaw’s Pygmalion), for ‘getting down to the facts’.

Whichever, so long as we mean pursuing and standing up for the truth, with what brass we have.

A blessed and restful Sunday to all our readers.