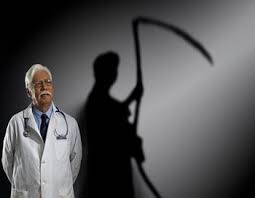 As of midnight tonight, as I write on this June 6th, the murder of adults will be legal in Canada.  Of course, we have had the legal killing of the unborn since May 14, 1969, but the striking down of the laws prohibiting murder-suicide opens a new, wide gate to the culture of death for all of us.

We should be clear on our terms:  As of midnight, murder-suicide will be decriminalized, by the dubious authority of the Supreme Court’s decision in the February 6th, 2015 Carter decision to strike down the laws prohibiting murder-suicide (suicide itself is already legal).  Physician-assisted ‘suicide’, that is murder, will not be legal until Bill C-14, currently in the Senate, becomes law, either amended by the Senators, or not.

For the time being, we will be in legal limbo, with all the inconsistencies and patchwork enforcement that entails.  Today on the CBC, their resident medical guru, Dr. Brian Goldman, said he would help someone die (his polite, antiseptic euphemism for killing them) if the conditions were right.  So much for primum non nocere.  Our physicians will now legally also be our murderers, even if, for the time being at least, we must consent to our own demise.  Physicians (and, we may presume, other health-care personnel) are also, for now, free to kill, or not to kill, as the case may be.  But that too may change.

As Canada enters this dark phase of her history, ponder the words of John Paul II, which I quoted in my post on the sad complicity of the great Jean Vanier:

laws which legitimize the direct killing of innocent human beings through abortion or euthanasia are in complete opposition to the inviolable right to life proper to every individual; they thus deny the equality of everyone before the law. It might be objected that such is not the case in euthanasia, when it is requested with full awareness by the person involved. But any State which made such a request legitimate and authorized it to be carried out would be legalizing a case of suicide-murder, contrary to the fundamental principles of absolute respect for life and of the protection of every innocent life. In this way the State contributes to lessening respect for life and opens the door to ways of acting which are destructive of trust in relations between people…

So object away, dear reader, whatever your religious proclivities.  For although the bell may toll for others for now, the bell will eventually toll for thee, physicians and politicians included.