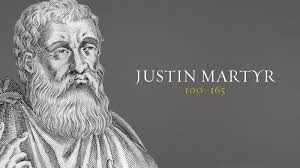 Today is, or rather was, as I am getting to this rather late, the memorial of Saint Justin Martyr, an early apologist for the faith.  Not as in ‘saying sorry’, but as in apo-logia, offering a ‘reasoned defense’ for Catholicism.  Saint Justin was a philosopher by profession, and tried many other systems before realizing that Christianity held the most reasonable hierarchy of truths to explain the human condition, and our final end.

God’s grace elevated and perfected the lifelong intellectual search of Justin, offering him absolute and unshakeable certainty that the Faith was true, that Christ was God and rose from the dead, that the Mass truly was the sacrifice of Calvary, as well as the Real Presence of the Son of God (it is from Saint Justin that we have one of the earliest and most complete descriptions of the celebration of the Mass, in a letter he wrote to the emperor Antoninus Pius, cf. the Catechism, par. 1345.  Transubstantiation was not an invention of the Middle Ages).

Around the year 150 A.D., a generation after the Apostles, Justin and a number of other Christians were rounded up and interrogated, recorded in a fascinating and all-too-real contemporaneous account (found in today’s Office of Readings). Tortured, scourged and beheaded, Saint Justin and his unknown companions witnessed for Christ.

As I travelled around Ottawa today, after the ordination of Bishop Scott McCaig last night, and the anti-euthanasia rally this afternoon, I prayed for our Prime Minister, who shares the name of the great early martyr, but not his reasoned defense for the faith, nor much sign of faith at all.  May Saint Justin intercede for our wayward leader, and we should all ask for his intercession, that Justin of the Trudeau variety come to his senses, both natural and supernatural, and bring to fruition his all-too-latent Catholicism.