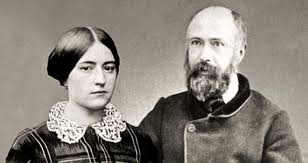 Paula Adamick in her article today, in her usual vivid way, connects the cultural trajectory from the ‘long, hot summer’ of 1968 to the one we are experiencing now a half-century in 2018, which would have a year of science-fiction to those back then. Things have turned out more fiction than science, and more dystopia than utopia. But God is bringing all things to their purpose and end, in His own mysterious way, sifting the wheat from the chaff.

First, a corrigenda: Contrary to what It turns out that Blessed Pier Giorgio was not a good singer, and may even have been somewhat tone-deaf. I am somewhat glad to read that he did have all the gifts, which God distributes equitably, and not equally. That said, he  (Pier, not God) loved to sing regardless, and, hence, ‘could’ sing, but I would wish that he had had just a bit of training, for it is an axiom amongst professional choir directors that everyone can be taught to sing, somehow, someway (although I have despaired of some more than once in my own brief experience). As Saint Augustine said, qui cantat, ora bis, he who sings, prays twice; but what the Bishop of Hippo apparently originally wrote was qui cantat bene…he who sings well. But singing well? Well, it is primarily from the love of God that ‘good’ singing flows, and, in general, at least in a liturgical setting, better a less good (I won’t ‘say ‘bad’) singer who does so to honour God, than a better singer for money. But there are limits, and I suppose some might want to keep lip-synching, or singing alone or amongst tolerant friends on mountain tops.

And an addenda: The newly minted Ford government in its summer session is also going to cancel the slightly less-newly-minted disastrous sex-ed curriculum, put in under the Liberals (with a convicted paedophile as one of the authors). The CBC was apoplectic this morning, waxing on about ‘going back to the 90’s’, as in, the ‘old’ sex-ed curriculum, put in place before the internet. The dinosaurs, the throwbacks. Get up to date. One might also add that the 90’s, which were not all that long ago from my perspective, were also before the rampant ideologies of transgenderism and the normalization of homosexuality, so this is a step in the right direction.

All in all, sex should be taught in the home, and a child’s ‘awareness’ should develop naturally, under the influence of grace and the virtues, especially those of chastity and modesty, in a. life of abstinence. You won’t read those words in the sex-ed curriculum, but you should. The Conservatives are taking a bold step here, but more needs to be done, and the corrupt educational system will not be fixed overnight; whether it can be ‘fixed’ at all in our socialist and agnostic milieu is a doubtful question. Homeschool or private school, if you can, and at least have your children avoid, like the plague that it is, the toxicity of a voyeuristic and latency-destroying education in sexual malfeasance.

Today is the feast of Saints Louis and Zelie Martin, the parents of Sainte Thérèse, along other likely saints, as all their daughters, five in total, became nuns (they had four other children who died in infancy). So not only is it possible to married and a saint, but marriage is almost a sure and certain path to sanctity, in the midst of the pots and pans, the minivans and mortgages, the messy dinners and diapers, if lived well, faithfully, in charity, patience and kindness, deeply immersed in prayer and the liturgy, receiving what grace one can from the Eucharist and the other sacraments.

Both Louis and Zelie originally wanted to enter religious life, but Louis was rejected from the Benedictine novitiate as he could not learn Latin (so have hope, those who struggle with declensions! You may be called to conjugate!), and Zelie, due to respiratory problems.

God had other plans for them, not only their own mutual sanctification, but also that their union would bring forth the Little Flower, whose vocation would be world-changing fruit. They lived the ‘Benedict Option’ well before that term became vogue, with Louis structuring his day around work and prayer, setting up a little oratory in his attic, where he would retire to contemplate, allowing his children to enter if they too wanted recollect, or ask spiritual advice.

Louis and Zelie formed their daughters well, in a way that would be quite different from what we now consider ‘education’, with all its focus on a ‘job’, practicality, money, success, life-long comfort and early retirement; one can only wonder what they would have thought of the current sex-ed debacle. The married couple, united in life and now in heaven, were together beatified by Pope Saint John Paul II on October 19, 2008, and canonized by Pope Francis on October 18, 2015.

As Christ says, and I paraphrase, in whatever path we are called, focus on the higher and most important things, even the ‘one thing necessary’, and all else will fall into place.