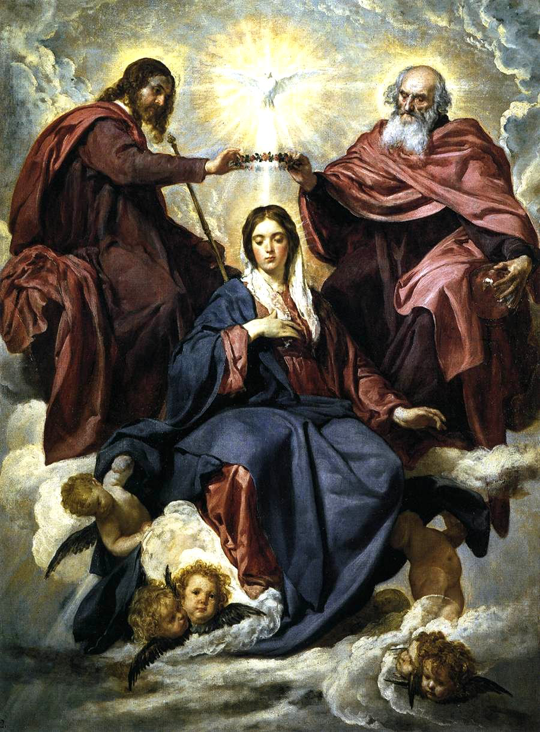 A blessed memorial of the Queenship of Mary, – as queen of heaven and earth, of angels and men. Although the Church has always celebrated the glories of the Mother of God, this feast was formally instituted by Pope Pius XII on October 11, 1954, in his encyclical Ad Coeli Reginam, four years after his own proclamation (Munifecentissimus Deus, Novemeber 1, 1950) of the Assumption of Mary into heaven, body and soul, and one hundred years after his predecessor’s, Pius IX’s, definition of the Immaculate Conception of Mary (Ineffabilis Deus, December 8, 1854). The feast was originally celebrated on the last day of May, but in the revision of the liturgical calendar after Vatican II in 1969, was moved to this day, August 22nd, the octave of the Assumption, with which this feast is closely connected. Our Lady spent a novena in heaven being prepared for her coronation as the Regina Reginae.

We honour Mary as ‘Queen of heaven and earth’ due to her role in our salvation, as the Mother of God, and, as Leo XIII put it, her almost ‘immeasurable power’ in the distribution of graces. In the wisdom of His providence, the Almighty has done, and continues to do, great things with and through His lowly handmaid.

In the words of Pius XII:

Let all, therefore, try to approach with greater trust the throne of grace and mercy of our Queen and Mother, and beg for strength in adversity, light in darkness, consolation in sorrow; above all let them strive to free themselves from the slavery of sin and offer an unceasing homage, filled with filial loyalty, to their Queenly Mother. Let her churches be thronged by the faithful, her feast-days honored; may the beads of the Rosary be in the hands of all; may Christians gather, in small numbers and large, to sing her praises in churches, in homes, in hospitals, in prisons. May Mary’s name be held in highest reverence, a name sweeter than honey and more precious than jewels; may none utter blasphemous words, the sign of a defiled soul, against that name graced with such dignity and revered for its motherly goodness; let no one be so bold as to speak a syllable which lacks the respect due to her name.

We might continue with any number of teachings and exhortations on the role of the Virgin Mary, Mother and Queen, in the role of salvation, and in our own personal salvation.

So pray your Rosary, devoutly, prayerfully, in conversation with the Mother of God, holding her name, indeed, ‘in highest reverence’.