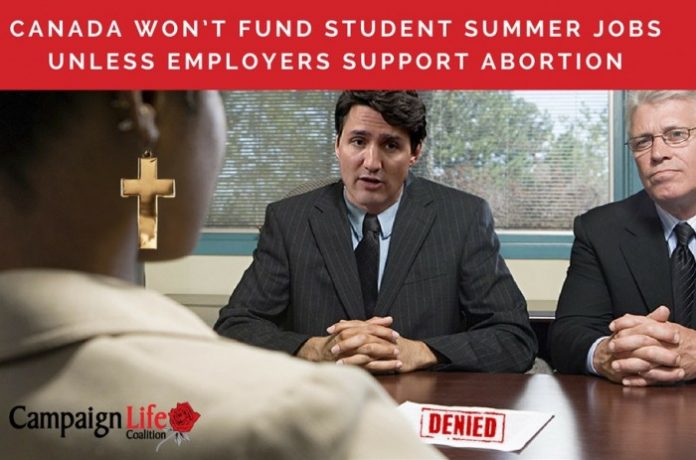 Well, at the risk of some level of sensationalism, it seems the persecution has begun, on the fringes at least. The Liberals under Justin Trudeau and Employment Minister Patty Hajdu are now requiring that institutions applying for a Summer Job funding grant from the federal government (which many Catholic and Christian groups do) must check off a box that attests they agree to ‘reproductive rights’, including a woman’s right to choose and receive an abortion.

There seems to be a background to this, as a reaction to the hue and cry from certain quarters of the populace and bureacracy after certain ‘anti-abortion’ groups (in the government-speak… ‘pro-life’ in regular speak) received such funding for summer internships.

Hence, the ‘attestation box’, that  must now be checked off to ensure no more money goes to naughty and hateful groups that want to limit a ‘woman’s right to choose’.

Of course, the attestation is also required of any institution, whether involved in pro-life (‘anti-abortion’) work or not:  Schools, camps, colleges, small businesses, all of them must now submit, or their application will not even be considered.

In response to the backlash, the government has suggested that such groups not specifically engaged in work against abortion should just check off the box, and their application will then be considered.

It seems, in the unspiritual and unreflective milieu, interior and exterior, in which these people seem to live and move, they don’t seem to grasp that no one of right and sound conscience can ‘check off the box’, without violating that very conscience. It is akin to the situation facing Thomas More, whose own friends and family asked him just to sign the Oath of Supremacy (making Henry VIII unlawfully Head of the Church in England) and not mean it.  Here was the future martyr’s response as given in The Man for All Seasons:

When a man takes an oath, he’s holding his own self in his own hands like water, and if he opens his fingers then, he needn’t hope to find himself again.

This whole mess signifies the corruption deep in the heart of this government, and Canada in general (just check out some of the comments under the above linked news article…we don’t seem that far from outright totalitarianism).  Under the rubric of ‘women’s rights’, the Liberals and their supporters not only advocate the deliberate murder of the unborn, but are now requiring everyone else to acquiesce in this evil, as is often the wont of those with seared conscience.  ‘Attesting’ to something means something, which is something Mr. Trudeau and Ms. Hajdu likely already know, and should learn if they do not.

Otherwise, why the box?