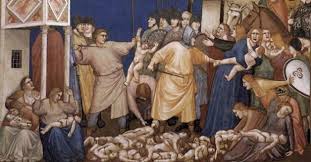 Marc Bauerlein has an insightful essay on false innocence in the recent issue of First Things, describing those who feign an innocence that, perhaps at some level they think they have, but, deeper down, in their heart of hearts, in that still, small voice of conscience I alluded to in my last post, they know they do not.

Today we celebrate true innocence, and true innocents, on this blessed feast of the Holy Innocents, a commemoration of all the ‘male children under two years’, murdered, and we say martyred, by Herod’s soldiers in Bethlehem and surrounding region, as he sought to destroy the Christ, whom Herod considered a rival to his throne.  Of course, ‘the Christ’ had already been taken to exile in Egypt, as the Holy Family fled the wrath of Herod at the warning of an angel.

To be declared a martyr, one must be killed in odium fidei, in hatred of the faith, and that is the case with these children, although they knew it not.   But they rejoice in heaven with all the angels.

We may also hope that these victims of the first Christian-era holocaust now rejoice with all the murdered children in our own day and age, not least those killed by the euphemistic-medical term ‘abortion’.  Pope Saint John Paul II in paragraph 99 of his Evangelium Vitae gives us hope that all the voiceless victims of abortion are in heaven, wherein he declares to mothers who have had abortions:

The Father of mercies is ready to give you his forgiveness and his peace in the Sacrament of Reconciliation. To the same Father and his mercy you can with sure hope entrust your child.

He comes close to canonizing the victims of abortion, but stops just short with the virtue of hope, for we know that no one can be lost just due to original sin, which is not a personal sin, of which these children are free.  At the same time, outside of baptism, there is no revelation as to how such children are saved; but the Catechism offers sure hope:

As regards children who have died without Baptism, the Church can only entrust them to the mercy of God, as she does in her funeral rites for them. Indeed, the great mercy of God who desires that all men should be saved, and Jesus’ tenderness toward children which caused him to say: “Let the children come to me, do not hinder them,” allow us to hope that there is a way of salvation for children who have died without Baptism. (#1261)

And just a few paragraphs earlier:

God has bound salvation to the sacrament of Baptism, but he himself is not bound by his sacraments. (#1257)

This is not to downplay the gravity of the crime of abortion, nor the crime of Herod, whom we might in some way term the original modern-day ‘abortionist’, killing innocent children who were an inconvenience to him.

Herod was not innocent, and neither we may presume are our modern leaders who support the illusory ‘right’ to abortion.  This is perhaps the darkest aspect of our photogenic Prime Minister, who is all smiles, hugs and high-fives, except, that is, on a few issues, where he gets all down and serious, and one of these ‘issues’ dear to his heart is the unquestioned right of women to ‘terminate their pregnancies’, about which he will brook no opposition. nor debate.

Trudeau seems to fall with Herod into the camp of the false innocents, those who claim to be doing the right thing, when, all along, they are doing the wrong thing, whether they know it or not.  We all suffer from this malady of a disordered and rationalized conscience, but some seem to suffer from it on a rather grand and breathtaking scale.

I wonder if such people examine their conscience?  I even wonder if they know what a conscience is, how to define this act within the human soul, its constituents, how to form said conscience?  From my years of teaching, and the sad state of catechetics even amongst Catholics, I have my grave doubts.  Does Trudeau sleep well at night?  Does he ever question his principles, his values, wondering perhaps he may not have it right, maybe even with the words of today’s reading from the prophet Jeremiah sounding in his soul:

Thus saith the LORD: A voice is heard in Ramah, lamentation, and bitter weeping, Rachel weeping for her children; she refuseth to be comforted for her children, because they are not. (Jer 31:15)

There are an untold number of children who ‘are not’, and not just because of surgical abortion, which has claimed several million lives here in Canada alone since its legalization in 1969 under Trudeau’s father.   There are also the children killed in very early stages by the morning-after pill and abortifacient contraceptives.   And what of the myriads of children who never existed because of contraception itself (also legalized in the same bill by Trudeau Sr.), or because women (and men) were too busy with careers, ambition, travel, ‘life experiences’, to have children, or to get married in the first place.

Yes, how many children ‘are not’ because of what John Paul II termed the culture of death, still marching on under Trudeau Jr.  I suppose Mr. Trudeau could be in a state of what was quaintly termed ‘invincible ignorance’, which, again, the great John Paul II described strictly in Veritatis Splendor as “an ignorance of which the subject is not aware and which he is unable to overcome by himself” (#62).  A stretch, perhaps, in Trudeau’s case, but even if true, a man of such profound ignorance could scarcely run his own life, never mind a country.  Even in the case of such invincible ignorance, although one’s personal guilt may be diminished, the evil is still an evil, and the conscience disordered and malformed.  Again, in the immortal words of the Holy Father:

It is never acceptable to confuse a “subjective” error about moral good with the “objective” truth rationally proposed to man in virtue of his end, or to make the moral value of an act performed with a true and correct conscience equivalent to the moral value of an act performed by following the judgment of an erroneous conscience.  It is possible that the evil done as the result of invincible ignorance or a non-culpable error of judgment may not be imputable to the agent; but even in this case it does not cease to be an evil, a disorder in relation to the truth about the good (#63)

And few disorders, whether in ignorance or not, produce worse evils than abortion and infanticide.

But enough.  Today, in the midst of the joyous Christmas octave, we celebrate the real first martyrs of the Church, while Christ Himself was still an infant.  As their name implies, they were in -fans, literally unable to speak, but as today’s Office of Readings declares via the 5th century bishop Quodvultdeus (I love his name, ‘whatever God wills’)

How great a gift of grace is here! To what merits of their own do the children owe this kind of victory? They cannot speak, yet they bear witness to Christ. They cannot use their limbs to engage in battle, yet already they bear off the palm of victory.

Amen to that.  We need not speak to proclaim Christ, but, rather, live and die for Him, in whatever span of time He gives us.  We should pray to the victims of our modern holocausts, that they intercede for us and their persecutors, that we all may grow in the love of God, our love for each other, and for life itself and that we all may, as the good bishop’s own name implies, ‘do whatever He wills’.