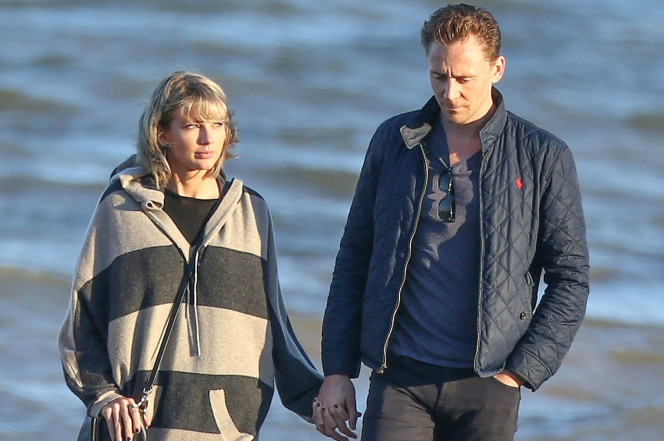 Alas, in earth-shattering news, the couple known as ‘HiddleSwift’ has broken up.  Yes, to you legions of fans (there have to be some out there to make its mountains of cash) of the Avengers’ nemesis Loki, and of the teen-angst ballads of Taylor Swift, the photogenic young-ish couple has called it quits, barely two months after their coupledom was confirmed.  They had the most perfect romance money and fame could provide:  Jet setting to all the romantic locales in Europe and beyond; gazing into each other’s eyes in boutique cafes; quiet strolls along the most picturesque promenades…What, oh what, could have gone wrong?

Well, everything.  It seems that as soon as Tom had to return to filming yet-another sequel in the ghastly Avengers series (I suppose they will keep making them so long as they make billions), the romance cooled off like a forgotten and deflated Yorkshire pudding left out too long. The nail was driven int0 the coffin when Tom-Loki tweeted a photo of himself ‘in costume’, which may have woken up Ms. Swift to what her paramour actually did for a living, playing some ridiculous mythical god-like creature in an unwatchable franchise, but I will not dwell upon this point, which is somewhat accidental.  I bear no grudge against Hiddleston, nor his films, which I am not forced to watch, nor, as far as I know, to pay for (see my review of the original Avengers, which was, in fact, one of my first blog entries, and there is a backstory to that).  Same goes for Taylor Swift’s music, such as it is.

The main point rather is the tragic nature of their romance:  For a friendship to blossom and flourish, not least the friendship that leads to the lifelong community of marriage, it has to be about something other than the romance itself.  There has to be a common project, a purpose, an end or telos; a friendship of any kind cannot just exist on its own.

Aristotle distinguishes three types of friendship: the concupiscent, the useful, and friendship proper.  The concupiscent is based on the pleasure the friend offers us, humour, company or even, as is so often said, sexual benefits.  The useful derives from what the friend offers in terms of utility:  He may have a nice house with a pool, or be a good fisherman or handyman, or share the driving on road trips.  There is nothing absolutely wrong with these friendships, which are often transitory and temporary, nor even with ‘using’ others in this way, so long as we do not use the person solely as a means to an end, and that we see them as an end in themselves.

Such true friendship, which must colour all friendships, is one where we ‘love’ the friend for his own sake, not for what he can offer us.

As John Paul II argues so forcefully in his discussion on male-female relationships, from his early (1960) Love and Responsibility to his later (1979-84) Theology of the Body discourses, true friendship is especially necessary in that adventure we call marriage, not least because marriage involves the other two types of friendship so heavily.  That is, because of the intense pleasure of matrimony, not just the sexuality, but all the emotional attachment and bonding that goes along with this, as well as the mutual dependence to run a household, support each other and raise children, marriage requires the love of charity, true friendship, most of all other kinds of friendship.

What, we may ask, was the romance of Hiddleston and Swift really ‘about’?  Did each of them ever intend to get married?

I am not sure either of them ever could, even if they desired such, not least because their phalanxes of lawyers would require binding pre-nuptial agreements to keep their mountains of cash safe, in case it ‘does not work out’.   As I pointed out in a recent article, that in itself would invalidate the marriage, as denying indissolubility, one of the required ‘goods’ that ‘make’ the marriage.

Furthermore, how would Ms. Swift ever know if anyone was marrying her for who she is, and not for her fame, her money, her prestige?  The number of men with the equivalents of these attributes to hers is miniscule indeed (she is worth a quarter of a billion), and the subset of these that would make good husbands likely non-existent. I recall vividly a discussion I had years ago with a very rich woman, who had a daughter who was going to inherit millions upon turning eighteen.  The anxious mother confessed to me that she would never know if anyone would ever love her daughter for who she was.

Beyond this, how would Ms. Taylor ever raise children, settle down to the humdrum life of vita domestica, spending her life, as one mother of a large household described it, immersed in various forms of ‘liquids’?

A former student of mine recounted that he met Taylor Swift years ago, before she was a worldwide phenom, quite by accident in a grocery store, while he was picking up leftover bread for the religious community in which he was then a novice. People were pointing to her, and he asked if she were famous.  She replied rather humbly, ‘Well, I’ve got a song or two on the radio’.  I sometimes think it may have been better for Ms. Swift if those songs had bombed and she had married some carpenter in California, and was now homeschooling a growing passle of children.  I dare say she would be far happier than she is, and would certainly provide a better example to the world.

Yes, I feel no envy, but mainly sorrow, for the rich and famous, whose lives are so distant from reality, especially the women, upon whom this weighs so heavily.  But no one can be fully insulated from God’s law imprinted upon nature and the soul, as Oscar Wilde’s Dorian Grey recounts so vividly.  Eventually things, our choices and non-choices, catch up to us.  As the now bifurcated Hiddleswift move on from this debacle to another fake romance, as they drift inexorably out of the potency of their youth (Swift is still sort of young at 26, but Hiddleston is gettin’ up there at 35) they will become, if they have not already, emotionally less willing, even unable, to give themselves to another, emotionally and spiritually, as ennui and fear of the next disastrous romance settle in to their tired souls, so weary of the world.

Far better to accept reality as it is, to settle down with the one you love, even if not perfect, perhaps especially if not perfect, or embrace a life of celibacy for the Lord and His work.

For it is only in losing ourselves, that we will find ourselves.