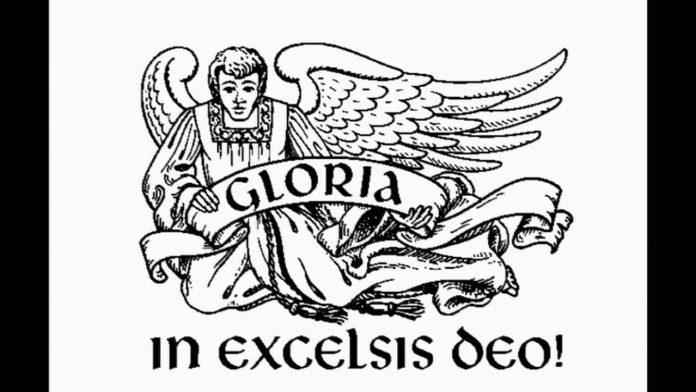 (In light of the memorial of the Guardian Angels, along with the previous feast of the Archangels, here are some words of Father Callum on the hymn myriads of them sang, in what language we know not, but likely angelic, as Christ was first revealed to the world, one that we repeat every Sunday in jubilation and praise, which we could use more of in this world, which too many have made too dreary for too long. There are numerous versions of the Gloria, besides the Gregorian chants, Vivaldi, Bach, Mozart…peruse them, and rejoice! Editor)

We say together most Sundays in the year (excepting Advent and Lent) the Gloria: “Glory to God in the highest.” Familiarity has probably made it difficult for us to focus on the contents of this ancient hymn; we recite it, or sing it, without noticing anything remarkable. And yet, given its prominence in our celebration, it merits attention. It’s really what we might call a Christian psalm, in the form of an expansion of the hymn the angels sang at Bethlehem: “Glory to God in the highest, and on earth peace to people of good will.” It shares one feature with the biblical psalms, viz., the practice of repeating an idea, but with different words. Today’s responsorial psalm that we heard a few moments ago is a good illustration of what I mean:

The law of the lord is perfect, reviving the soul;

and then in the next verse we find a variation of the same concept:

the decrees of the Lord are sure, making wise the simple.

Something similar occurs in the Gloria. The phrase

you take away the sins of the world, receive our prayer.

The Gloria has another claim on our affection: it’s old. By the 300s it was already part of public worship. And so we Christians have been using the Gloria for some 1,800 years. I like to imagine a giant chorus singing it across the centuries, the massed choir, as it were, of the millions of worshippers who chanted in their day the very hymn that we use nowadays. We may further add that in reciting the Gloria “we join our voices to the angelic choirs praising God”[1] insofar as here as elsewhere in the Mass we are conscious of echoing on earth the song of the Seraphim: “Holy, holy holy, Lord God of hosts.”

The Gloria, like the creed, is trinitarian in form. It opens with a description of God the Father as the source and fulness of the Godhead: “We give you thanks for your great glory, Lord God, heavenly King, O God, almighty Father.” The middle section then highlights the only-begotten Son, made incarnate in the man Jesus. His great work of salvation is commemorated, as I have already note, with the title “Lamb of God,” who, by taking away the sins of the world can deliver our prayers to the Father in that he is seated at the right hand of God to intercede for us. Surprisingly at first, the Holy Spirit is merely named; there is no reference to his role of sanctifying the Church as he acts across the centuries by instilling in Christians, as Saint Paul says, “the mind of Christ.”[2] Referring thus briefly to the Holy Spirit witnesses to the antiquity of this prayer, for even in the New Testament we find attention directed foremost to the Father and to the Son, as in the opening of the second letter to the Corinthians: “Grace to you and peace from God our Father and the Lord Jesus Christ.”[3] I think the reason for this occasional bypassing of the Holy Spirit comes from his mission being in the future, while creation and redemption are over, . . . but not over and done with, because their effects continue across time. Whatever the case, the fact is that in the history of the Church, the person and activity of the Spirit received explicit and detailed attention only after the full divinity of Jesus had been defended and commented upon by the early oecumenical Councils.

But it is more as a piece of poetry that the Gloria has maintained its hold on our Catholic imagination. A good example of what I mean can be found close to the beginning: “We praise you, we bless you, we adore you, we glorify you, we give you thanks for your great glory.” We praise God for being God, recognizing that we are his creatures; hence it follows that we bless him. “Bless” here has essentially the same meaning as praise, but it intensifies the sentiment by reminding us that creation is an ongoing process in that God continues to hold us in existence: we are being created at every moment of our existence. Recognition of who God is leads us to adore him, to render him the homage that is justly his. Thus, arises in us a sense of gratitude, and so “we thank God for his great glory.” Truly, we have something to be thankful for, specifically what has come to us from our Saviour, and the closing lines contain another series of terms that form a crescendo, all beginning with the phrase, “You alone are the Holy One,” which is a term applied to Jesus in the New Testament by, surprisingly, demons: “We know who you are,” they cried, “the Holy One of God.”[4] It follows, then, that we sing, “You alone are Lord,” which is a divine title, which we are empowered to use: “No one can say, ‘Jesus is Lord’ except by the Holy Spirit.[5] The next “You alone . . .” is the climax: “You alone are the most High.” This is another way of saying that Jesus is holy, is Lord, is literally and fully divine.

The final words contain another echo of the New Testament: “to the glory of God the Father.” It reminds us of the words of Jesus: “Father, glorify you Son, that your Son may glorify you.”[6] And we may finish this look at the Gloria with a sentence from 1 Corinthians that summarizes not only this ancient hymn but the entire Christian dispensation: “when all things are subjected to [Christ], then the Son Himself also will be subjected to the [Father] who put all things under Him, that God may be all in all.”[7]a