Thus endeth another Easter Octave, the week of Sundays that the Church offers us to celebrate the Resurrection of Christ, with another 40 days of slightly more subdued celebrations (‘Easter weekdays’) to follow.  That whole ‘rising from the dead’ really did change the whole world, and our view of it, which is why writing about the ‘news’, even  must always be put into perspective.  All things are passing, God never changeth, wrote the great Theresa of Avila.  So set your hopes high, and your minds at rest. Christus surrexit vere, alleluia! 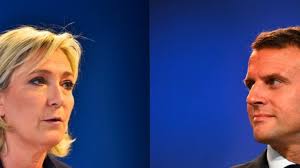 But on the news, it is significant that the two finalists in the French elections (like their dinners, these come in various courses, it seems) are the right-wing Marie Le Pen, who wants to stop Islamic immigration, but has not much else; and a vague, centrist, bland Euro-guy, with seemingly no fixed opinions on much of anything of consequence, even whose name is a cipher, ‘Macron’.  He did marry his former high school teacher, 24 years his senior, which is a bit out of the ordinary, even in our uber-tolerant milieu.  I have nothing really against age differences in marriage, so long as they can be made to work, practically speaking (as in raising children, conversing, hanging out together and such).  But there is an adage that the difference is greater if the woman is older, for women and men do not age the same way, and the male counterpart is fertile more or less until death.

But there does not seem much prospect for children with this couple, for she is 63.  The main problem in this relationship is that she left her husband and three children to marry her boy-ish newbie, which signifies a deep moral blindness, rampant throughout French culture. As I mentioned in a talk I gave on Divine Mercy Sunday,  back in February France outlawed any webpage or electronic communication that spreads ‘misleading information’ about abortion, including anything that claims abortion, or having one’s child murdered, has any ‘negative consequences’.  As they put it, this could traumatize women who have chosen to ‘interrupt their pregnancy’.  Most pro-life webpages are now illegal, punishable by massive fines and up to two years in jail. To add insult to injury, France also forbade a video of Down’s syndrome children thanking their parents, for, yes, allowing them to live.  Same reason, for a good number of those babies killed were likely diagnosed with Down’s.

Mark Steyn is correct in his demographic and cultural analysis, that what we knew as ‘France’ is doomed, well within our own lifetimes, for they just do not seem all that interested in having children and raising families, while other certain cultures whom they have welcomed into their borders most certainly are. Pace, their challenger Marie Le Pen, whose father lost to Mitterand nearly two decades ago, stopping or limiting immigration now is a wee bit too little, too late.  And without a French culture to support French families and children, what possible future does France have?

So, bonnes chances to Le Pen, Macron, his lady friend, whom I will refrain from calling his wife for, to paraphrase Our Lord at the well, she already has a husband, and all the rest of the citizens of La Republique.  Whatever happens on May 2nd, they’re going to need all the good fortune they can get.  In fact, all the good fortune they need is in their Faith, which they have all-but rejected. In the words of the great John Paul II, France forget not your birthright!  And bring back to mind former things, before they pass away forever…