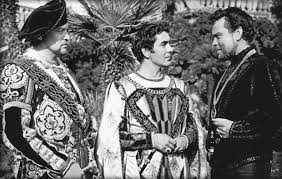 In case you haven’t noticed by now, I am quite a fan of swashbucklers, and have been since I was knee-high to a grasshopper. My dad and I made quite a thing of dueling with foam noodles and rolled up skid-prevention rubber. Of course, Robin Hood was my first true love. But I do reserve a special place in my heart for several other dashing rogues with sword in hand, especially if they are grounded in storylines that convey spiritual depth and poignancy. One of them is Andrea Orsini from the 1949 black-and-white period piece, Prince of Foxes.

Our story opens in Renaissance Italy. Tyrone Power stars as Captain Orsini, an unlikely hero who starts out as an envoy of the power-hungry Cesare Borgia. Climbing the ladder of success by any means necessary in order to bury his humble beginnings, Orsini believes that he has found the true fulfillment of his life. What could be better than living as a nobleman in a society of learning and culture, respected for shrewdness and cunning, in which every man is his own master and can compete as equals according to their skills?

But the glamour of the world and the thirst of raw ambition do not satisfy him, but only warp his soul. Orsini’s pious widowed mother, Mona Constanza Zoppo, had tried to teach him this long ago, but he had refused to listen, and she had prayed he would be converted, even if it meant he would lose all his earthly powers. Orsini experiences this prayed-for enlightenment in the most unexpected of ways, while he is on a mission of intrigue and seduction to weaken the fortifications of a small province so Cerseare Borgia can overrun it and seize control.

However, Orsini’s mission will send him on a journey into his inner self and a powerful encounter with those who can see through his silky façade to his restless heart. One of these people is Marc Antonio Verano, the elderly count of the province he has been sent to sabotage under the guise of friendship; another is the count’s much younger wife, Dona Camilla, who refuses to reciprocate Orsini’s advances or betray her husband’s trust. Gradually, Orsini begins to be drawn away from his partner-in-crime, the assassin Mario Belli, and loses his nerve to pursue his devious plans. The rest of the story is one of conversion and reassessment of self.

When the duke refuses to submit to Borgia’s threats and prepares to defend his tiny domain from aggression, Andrea finally repudiates his power-hungry former master and experiences a change of heart, dedicating his wits as “Prince of Foxes” to aid the duke’s defense. It is the couple’s own stalwart sense of nobility that taps into Orsini’s better nature and brings him to the realization that Borgia’s philosophy of life is profoundly perverse, even though the trappings are appealing enough. The ultimate reality  he must face up to, in the midst of both external and internal conflict, is that it is far better to die in a good cause than prosper in a bad one.

Prince of Foxes stands out as an all-time classic swashbuckler gem, atypical in its plot twists and moral potency. This is a story about what’s really important in life, told with  both vigour and subtlety, mirroring the many moods of the tale. The acting in this film is excellent, led by Tyrone Power and Orson Welles. The plot is full of intricacies and unexpected turns. There is also some wonderful sword-play and battle sequences. I will say that I felt the ending wrapped up rather abruptly with a few loose ends left dangling, due to budget cuts, but that’s just the fan-girl in me crying out for more.

We are also sadly deprived of seeing the splendour of the Italian setting in color. The makers erroneously believed Tyrone Power to be past his time and washed up, and didn’t want to put too much into the production. This was a terrible miscalculation, since even with its limited budget and obvious time constraints impressed upon it, it proved to be one of Power’s most mutli-faceted roles as a man at war with his own conscience and with a story that proved far more meaty than most swashbuckling fare. But in spite of the miscalculation on the part of the producers as to how much money to cash into the project, the cinematography was saved through masterful shadow effects that bring a haunting gothic feel to the film. A special example is the light being cast through the chapel screen in the count’s castle, seeming to reveal the contrast of light and darkness in Orsini’s soul even as he is watched by the Divine.

For once, we have a romance based on true nobility! Indeed, it is quite evident that Lady Camilla is quite smitten with Orsini, but still she will not betray her husband. The reason is that she truly loves the latter for his goodness and wisdom, and whole-heartedly supports the cause which he champions. In effect, she is a nobler version of Queen Guinevere. After the count is mortally wounded, he joins the hands of Orsini and his wife, thanking them for their faithfulness and entrusting Orsini with her safety and that of the city. Orsini uses his wits to out-fox Borgia for as long as he can, then gallantly agrees to turn himself over to the enemy so Camilla and the inhabitants will be spared from slaughter.

The power and beauty of art is an important motif in Prince of Foxes, which is no surprise, considering the setting is Renaissance Italy. Orsini first wins the respect and affection of Dona Camilla when he meets her at an art dealer’s shop and makes her a gift of a painting he was going to sell. Later, at the castle, Camilla asks him to pain her portrait. Since he is talented with the brush and has an eye for beauty, he accepts the commission, thinking this will be a means of seducing her. But instead, his heart is open to true love and honour through the project, as he learns that that the deepest sort of beauty is found in the intangible things, which he must embrace before he can fulfill his destiny and deepest desires.

Also, when he is captured, the form of torture suggested is that his eyes be struck out, robbing him of his ability to enjoy the beautiful things that have always provided him with such pleasurable as a connoisseur of the arts. However, he responds that he does not mind so long as his last sight is that of Camilla, the woman who taught him about the true nature of beauty that can never be taken away from him. In essence, he paid testament to the fact that she had opened the eyes of his heart.

I do have several questions which the plot left unanswered: what made the assassin Belli spare Orsini’s life at Borgia’s court? It’s left pretty much a mystery as to whether it was a matter of the better angels of his character soaring into the heavens…or that someone paid him off to speed up the conversion process! But either, I must say that Everett Sloane made a wonderfully ferret-like villain. Another question is how did the rebels manage to toss Borgia out of the province at the end? All the odds were against them, and the idea that they could just storm the place with farming tools doesn’t really hold up to logic. It seems as if Orsini would have come up with a more mentally stimulating plan. Lastly, why wasn’t the Lady Borgia, who Orsini once courted, more vengeful after he ditched for another woman? I mean, she’s a woman, she’s Italian, and she’s a Borgia!! No further explanation necessary

Speaking of Italian women, one of the most important women in this movie was Orsini’s mother. The providential way in which her son’s life plays out seems rooted in her own prayers for his conversion, even if that meant he would be stripped of all his worldly gains. After he has been tortured by Borgia, she is ordered to come to the castle and care for him. Seeing him brought forth from the dungeon to be mocked by Borgia’s guests at a feast, she is devastated by his condition and her realization that her own prayers for him to be “stripped” have come to pass.

Acknowledging her presence, he weakly murmurs, “Mama…mama…”, and she emotionally breaks down. This is such a touchingly human moment, and so reminiscent of Mary seeing her Son carrying his cross. Although this cruel display of having mother and son meet in such circumstances was arranged by Borgia to prove to Dona Camilla that Orsini was of common stock, but it has the opposite effect on her that he thinks it will. Instead of repudiating Orsini, she boldly responds that he was never nobler in her eyes than he was at that moment.

The main thing that makes Prince of Foxes so special is its call to conversion and deep spirituality running through all the action. It is a story of true noblesse oblige and Christ-like sacrifice, transforming redemption, and death-defying courage. Unlike many action and adventure films made solely for distraction, this production, though sadly little-known, manages to penetrate the surface and reach for deeper treasures. For those who appreciate this sort of depth, and who also love a rousing tale of adventure and romance set against the backdrop of historical fiction, this classic is a must-see of the swashbuckler genre.

Avellina Balestri (aka Rosaria Marie) is one of the founding members and the Editor-in-Chief of The Fellowship of the King, a Catholic literary magazine featuring the works of homeschool students, homeschool graduates, and beyond. She reads and writes extensively about the history and culture of the British Isles, taking a special interest in the legends of Robin Hood and the stories of the Catholic English Martyrs. She also sings, composes, and plays the penny whistle and bodhran drum, drawing inspiration from Celtic music artists such as Loreena McKennitt. She also spends her time watching and reviewing classic movies, networking with a host of zany international contacts, and last but certainly not least, striving to deepen her relationship with the Ultimate Love and Source of Creativity, and share that love and creativity with others.