The Carmelite Order traces its spiritual roots back to the prophet Elijah, but its practical foundation was in the twelfth century, round about the same time as the Franciscans and Dominicans. In such long-standing institutions, there is the principle: Semper reformanda est – that they are always in need of reform (well, the unique Carthusians are an exception whose motto is crux stat dum volvitur orbis, and who have never needed nor been reformed). Even in our own lives, the spiritus mundi creeps in, breeding a compromise, a lethargy, a pusillanimity, the ‘spirit and fire’ of Elijah giving way to a bureaucratic numbness, and a resistance to the Holy Spirit.

Such was the battle of the sixteenth century Carmelite Saint John of the Cross (+1591), who, with Teresa of Avila, reformed the ancient order. Not a reformer in the sense of Luther, Calvin and Zwingli, who, likely contrary to their original intentions, accelerated the compromise with the world by their rejection of Tradition, but rather by going back to the true source of spiritual renewal, Christ, the Sacraments and, in this present case, the original Rule of the Order in 1209, which called for a greater insistence of prayer – especially nocturnal, penance, fasting and enclosure.

John, with Teresa’s spiritual support for the female branch, was called to bring the Carmelites back to this pure and ancient rule, to its original spirit; and, as befits all true reformers, he was persecuted and rejected for his efforts, eventually being captured and imprisoned by his fellow Carmelites locked in a cell barely big enough for his body, and publicly lashed at least once of a week. Strange behaviour for one’s fellow brethren, and one wonders. But then I suppose zeal takes various forms, and one might sympathize with men being told that their lives were soft and weak, and to start waking up at midnight to chant the Office. Who was this little Spaniard to tell us what to do?

It was during his confinement that Fra Juan composed his most famous poem, Spiritual Canticle, a meditation of the soul’s union with Christ, a sublime work of literature, on which the future Karol Wojtyla – who seriously considered becoming a Carmelite – would write his first dissertation. The friar also sketched a mystical image of Christ on His Cross, seen from above, which Salvador Dali – whose life was rather different from that of our saint – used to paint his own famous depiction. 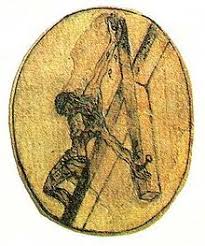 Eventually, the resistance proving too much, a distinct Order was founded, the ‘discalced’ Carmelites, so-called due to their insistence on the poverty of not wearing shoes. Supported by the Pope and the King, John founded and reformed a number of such discalced Carmelite monasteries, traveling thousands of miles on foot, before succumbing to erysipelas at the house in Ubeda on this day in 1591.

John is remembered as one of Spain’s foremost poets as well as a spiritual genius whose works – the Spiritual Canticle, Ascent of Mount Carmel, Dark Night of the Soul –provide a beautiful, rhythmical and systematic description of true growth in holiness, which is really what life is all about, if we had, with him, eyes to see and ears to hear. For only one who had really travelled that narrow path could write about it so truly. Saint John of the Cross was canonized by Pope Benedict XIII in 1726, and declared a Doctor of the Church by Pius XI in 1926.

I will leave with words of the Saint from today’s Office:

Would that men might come at last to see that it is quite impossible to reach the thicket of the riches and wisdom of God except by first entering the thicket of much suffering, in such a way that the soul finds there its consolation and desire. The soul that longs for divine wisdom chooses first, and in truth, to enter the thicket of the cross.