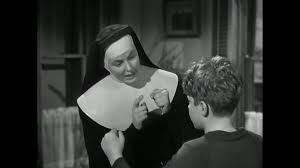 It seems that there is something stirring in the movie-making business of late. Namely, religious themes are reappearing on the radar in a more positive light to appease the niche counter-cultural audience that has proven it still carries some clout at the ticket booth. Even if it’s just a matter of throwing them a bone for cash rewards, the effects are still perceivable in the long view from the bleachers.

As a Catholic Christian myself, I would be inclined to welcome this return of religious flicks in theory. However, this inclination has been somewhat stymied by many of the end results of this faith-filled splurge. I often find myself adding to the litany of prayer: “From the scourge of Christian independent productions, deliver thy people, O Lord!”

Instead of telling full-bodied, life-like stories with multi-faceted characters and thought-provoking themes, the well-intentioned debacles settle for predictably preachy plot-lines, cardboard cut-out characters who fill stereotypical roles, and cereal box scripts, promising the synthetic prize of a happy-clappy finale as indigestible as too many bowls of Fruit Loops. These exhibitions could serve no better purpose than turning off the rest of the world to religious people in general (to which this religious person responds in her defense…*face palm*).

Some of the worst examples of this include God’s Not Dead, Fireproof, and Heaven Is For Real. Beyond this, there are even some major motion pictures that have recently taken on religious themes and plummeted to the depths, such as Noah, another exercise in miscasting Russell Crowe (as if the Irish-accented Robin Hood and tone-deaf Javert weren’t bad enough!), including such delights as giant rock monsters, narcotic berry juice, and a Cockney stow-away on the ark who eats one of only two computer generated lizards!

To be fair, there are some more bearable releases with at least some elements of quality such as October Baby (at least there is some plot substance and character arc), Son of God (I don’t care overly much for the cool dude Jesus, but the Passion sequences were heart-rendingly well-done), and Mom’s Night Out (totally bonkers, but with some genuinely humorous moments and Christian characters who are not insufferable goody-two-shoes). That having been said, I don’t believe any of these sail past the mid-zone mediocre rating.

So the question remains: are we to consign ourselves to the dismal reality that all faith-flicks are doomed to be lost causes for those who are exploring the big questions of life and happen to be lovers of quality cinema? I for one vote NAE. This is because, as a classic movie buff, I have fallen in love with more than a few quality motion pictures that unflinchingly take on religious themes in a way that is both complex and universally impacting for the religious, “spiritual but not religious”, and non-religious alike.

This is a vital point, for if religiously themed films remain imprisoned in their own niche circles, it is simply a matter of redundantly preaching to the choir and doing nothing in the way of opening hearts and minds to new ideas or expanding discussions on the most important questions of life. We must look beyond the horizon in this, and break the bubble of our comfort zones to reach the outside world.

For this very reason, one of my all-time favorite films is the 1966 production A Man For All Seasons, chronicling the final years of the steadfastly Catholic Sir Thomas More who is executed for his refusal to betray his faith and conscience by acknowledging King Henry VIII as Head of the Church in England.

While this might sound like a subject in which Catholics alone would emotionally invest themselves, the screenplay was actually written by the agnostic Robert Bolt, and the audience appeal has crossed all boundaries of belief. The main reason for this is that More’s legacy of moral integrity truly does stand on its own in any age, as made clear by the title.

Also, contrary to the revisionist projection of More as a humorless and perverted prig in Wolf Hall, he had a delightfully quick wit even in the most dire of circumstances and loved to “make merry” as an active socialite and family man. Even as an imperfect man in an imperfect era of history, this warmth and humanity shines out in Sir Paul Scofield’s portrayal. We can relate to him and sympathize with his difficult position naturally, without having it being forced in our face like a proselytizing pamphlet.

The same applies to the 1943 film The Song of Bernadette, telling the story of a teenaged French peasant girl who claims to see visions of the Blessed Virgin Mary. Again, what we would assume to be a quintessentially Catholic endeavor was actually based off of the book by the same name written by the Jewish Franz Werfel, who had been saved from the Nazis by the Catholic citizens of Lourdes during WWII.

He managed to convey the story of Bernadette and her town with sympathy, realism, and a healthy dose of the sacramental imagination. All this was beautifully conveyed on screen with freshness and power instead of the use of sugary platitudes or sappy sentimentality. Jennifer Jones’ portrayal of Bernadette Soubirous is indeed a miracle in itself for managing to capture both the innocence and wisdom that has drawn viewers from all backgrounds to fall in love with her.

Another film of note is the 1953 murder mystery I Confess, directed by Alfred Hitchcock and revolving around Fr. Michael Logan, a Catholic priest in Quebec who finds himself framed for a murder he did not commit. In fact, he already knows who did commit the crime…because the murderer told him under the Seal of Confession!

The reason why this movie was able to cross the religious divide was because it was a genuinely good thriller with a unique plot angle, and has been called “technically one of Hitchcock’s best.” This is fascinating, because it is one of the only times the Catholic Master of Suspense dealt with a story involving his faith so directly. But even for those who found maintaining the Seal of Confession to be a strange and unreasonable expectation, Fr. Logan’s very human fear, yet with his resolve to remain true to his vows, is naturally admirable, and Montgomery Clift was able to reflect that quiet heroism to a tee.

Still on the subject of priests, the 1983 production Scarlet and the Black focuses on real-life hero Monsignor Hugh O’Flaherty, called “The Scarlet Pimpernel of the Vatican”, who aided refugees of every stripe (from Allied POWs to hunted Jews) to escape to neutral Vatican territory during the Nazi occupation of Rome in WWII.

You would be hard-pressed not to find something to like in “Hugh”, charming at parties, daring in underground rescue missions, biting in Irish sarcasm, and gloriously fiery in temperament with a sharp right hook. A master of disguises and genius at organization, he is also compellingly human and rough around the edges.

Just as Gregory Peck brings this role to life with zeal and panache, Christopher Plummer perfectly embodies his tormenting and tormented nemesis, Herbert Kappler, SS Security Chief of Police, whose own soul-searching forces O’Flaherty to confront his own personal demons.

Lastly, I would like to draw attention to a more recent film, the 2006 production Amazing Grace about parliamentarian William Wilberforce and his crusade to abolish the British Slave Trade in the early 19th century. Although Wilberforce is clearly a devout Anglican Christian and his faith is integral to his world view, one need not share his religious beliefs in order to admire his courageous stand against one of the worst evils of his day, even at the expense of his healthy and nearly his promising career.

Beyond this, his character as played by Ioann Gruffudd is not a slap-on-a-smile-and-push-a-pamphlet type. He has a depth and sincerity which reveals itself through his interaction with everyone he encounters. He is also deeply human, which is brought to the fore by the fact that he sinks into depression and near total despair when his efforts are thwarted at every turn. Yet still, with the support of his spirited wife, he is able to hang onto hope and see his cause to completion.

So in conclusion, all of these films, and many more like them, encourage me with the fact that God is not dead on screen after all. In fact, the mysteries of divine interaction with and influence through humanity can be revealed with great poignancy through stories that defy false stereotypes and leave us changed for the better through traveling the worn path of joys and sorrows with the leading characters.

In Thomas More, Bernadette Soubirous, Michael Logan, Hugh O’Flaherty, and William Wilberforce, we find a complex combination of holiness, heroism, and humanity. In fact, it can truly be said that to be holy is simply to be more fully human, as God calls us to be. This is what we need more of in religious themed productions today. Indeed, perhaps through “art for art’s sake”, creating beauty for its own rewards, the message we are trying to send shines through all the clearer.