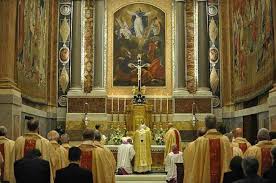 As I have mentioned previously, Cardinal Sarah, the head of the Congregation of Divine Worship (so the highest authority in these matters besides the Pope himself) has asked for priests to return to the ad orientem mode of saying Mass, worshiping ‘with the people’, facing the ‘East’ and the return of Christ, as was done for millennia prior to the revision after the Second Vatican Council.  As this article by Christopher Ruddy in First Things makes clear, sadly, the Cardinal’s suggestion has been quickly shot down by the highest authorities in Rome, for reasons that are not made so clear. I think Ruddy is correct, that we have lost much of the eschatological, eternal orientation of the pilgrim Church.  It is all about here and now, our feelings, the immediate payoff, charisma and personality. Hence, also , the rejection of meditative ‘other worldly’ Gregorian chant, polyphony, splendid vestments, clear and direct sermons that challenge one to perfection and so on.  We are way too absorbed in clappy-hands, guitars, emotive ballads, inclusivity and feelin’ good.

I hope that the good Cardinal Sarah’s sober words, which go far beyond ad orientem , into the very nature of what it means to be and to worship as a Church, have influence beyond the ‘here and now’.  May they seep into hearts that are perhaps a little too focused on fruit that does not last.

And while we’re at it, to paraphrase the late great Father Neuhaus, one should also peruse the article by Tom Holland on the need to re-bastion Europe against the rising tide of uncontrolled mass immigration.  As I have also written before, Christian and non-Christian, that is, pagan and unbaptized, cultures just do not mix, unless assimilation occurs, one would hope in the Christian direction.  Historically and into the present, this applies to Christians and Muslims, but also between Christians and non-Christians, namely, the neo-pagans who now fill the halls of our universities, parliament and media.

The problem, as we are all aware and Holland emphasizes, is that Europe is hardly Christian anymore.  Can an agnostic paganism carry the day? To what possibly could the Muslim immigrants assimilate, even if they were inclined to?  See the last paragraph above.  Who are we as a Church, and, more broadly, as a civilization?

Another black man was shot by a white officer.  This time, the black man, Charles Kinsey, a therapist at a group home, was helping an autistic man on the street when officers, an entire SWAT team apparently, were called.  Mr. Kinsey had his hands in the air and was shouting that he and his patient were unarmed, explaining the situation, when three shots rang out, one bullet ripping through Kinsey’s leg.  Fortunately, he survived, and was conscious throughout.

Besides this, two other things are troubling:  When he asked the officer why he shot him, he replied ‘I don’t know’.  Hmmm.

Then, the officers handcuffed Kinsey, purportedly leaving him bleeding on the street for 20 minutes.

Now, I admit, I do not know ‘all the details’ for all the cops-can-do-no-wrong  crowds out there.  It turns out now that the sniper was aiming for the autistic patient, who was playing with a plastic truck. Is this police procedure?  I am glad he had bad aim, at least in this instance.  If a man with his hands in the air can get shot with a high-powered bullet, what has happened to the rule of law?  We must be able to trust our executive branch to act in a way that is at least somewhat predictable, for if they become chaotic, there is no longer any order to stem the external chaos outside the ‘rule of law’.  And we are entering rather chaotic times.

And, as the Republican Convention wraps up, we witness the ‘Trumps’ in full display.  Ted Cruz failing to endorse Trump was the high or low-light, depending on your perspective; Cruz was booed, whether spontaneously or, by plan.  As was the plagiarism of Melanie Trump, or her speechwriter, from Michelle Obama’s speech of eight years ago.  Donald Trump is now officially the Republican nominee. America is entering some interesting waters, as they face the unenviable choice of Trump or Hillary. Well, there can really be no choice for Hillary, as vehemently pro-abortion.  So what does one do? Well, declaring your own nation is one option, as this enterprising Native Chief ‘His Excellency’ Carle has apparently done.  I have actually thought of that, even within the precincts of my own home, which should be a man’s castle.  Long live freedom!