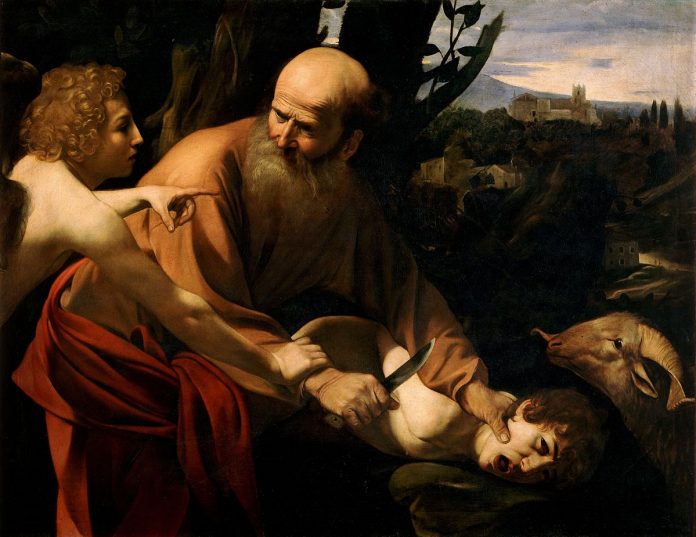 The most terrifying scene in the Old Testament occurs in Genesis 22, when God tests Abraham, saying:  “Take your son, your only son Isaac, whom you love, and go to the land of Mo-ri’ah, and offer him there as a burnt offering on one of the mountains that I shall show you.”

In high-minded moments we may imagine ourselves bravely facing death for the faith.  Perhaps we join Daniel in the lion’s den, put to the test, but preserved from the lion’s jaws.  Or more darkly, the countless martyrs, not spared, but allowed to die at the hands of evil men, laying down their lives for The Lord.  Or, Heaven help us, witnessing the martyrdom of loved ones like the mother in 2 Maccabees.  Having watched her six sons tortured and murdered by Antiochus, the king enjoined her to plead with her seventh and youngest son to save himself.  Her words pierce with a terrible clarity of faith:

My son, have pity on me.  I carried you nine months in my womb, and nursed you for three years, and have reared you and brought you up to this point in your life, and have taken care of you.  I beg you, my child, to look at the heaven and the earth and see everything that is in them, and recognize that God did not make them out of things that existed.  And in the same way the human race came into being.  Do not fear this butcher, but prove worthy of your brothers.  Accept death, so that in God’s mercy I may get you back again along with your brothers.

Yes, perhaps even this.  Yet we cannot bring ourselves to imagine joining Abraham in carrying out the will of God in the sacrifice of his son Isaac to God.  It defies natural law, and can only be reckoned righteous to one in a mysterious and incomprehensible communion with God.

We quickly move past the tension of the scene to the consoling resolution, when the Angel of God stops Abraham, who had obediently raised his knife, about to sacrifice his son Isaac.  But for our father Abraham, the patriarch of the covenant with Yahweh, the tension we elide in horror lasted three days and nights, as he walked with his son Isaac to Mo-ri’ah, carrying the knife and fire, as Isaac carried the wood for the burnt sacrifice.  Innocently, Isaac inquired of his father after the missing lamb to be offered.   God himself will provide the lamb for a burnt offering, my son, Abraham replied. Perhaps Abraham had an intimation of God’s merciful providence.  Or perhaps Abraham possessed the virtues of justice and gratitude which flee from our hearts almost instantly once a gift becomes ours to keep.  Somehow Abraham, like Abel the Just, was able to abide in the truth that even our most beloved belongs to God and cannot be withheld.   But the terrible fidelity of Abraham is too much for us to look upon.  It is well that we sit small in fear and trembling when we consider our faith.

In The Symposium and other Platonic dialogues, Socrates speaks of love of a particular good leading to a more universal love of the good, giving rise to philosophy and religion.  We experience this as we have children and are drawn beyond ourselves into the unbroken chain of being.  Unlike dumb animals, we knowingly beget children who will in turn beget children and so on. Philosophy and religion are harmoniously awakened within us by the transcendence of self, required of parenting.  But the God of the Bible is not merely the endpoint of some natural intellectual and spiritual enlargement.   The God of Abraham, Isaac and Jacob, the God who became man and transformed humanity, is not some tame, household god.

It is natural for us to long for the small spiritual horizons of a peaceful shire, a Norman Rockwell Christianity where the struggle between Good and Evil is resolved by a warm, forgiving light, dappling easily reconcilable human imperfections, represented by broken shoes and ill-fitting clothes.  We long for the psalms of abundance, broad and tranquil like the Mississippi, undulating to the theme song from The Waltons.  But sentimentality is not one of the Gifts of the Holy Spirit.

We all know the folk wisdom bromide, the family that prays together stays together, and in our age of generational apostasy, perhaps smile wanly at its unfulfilled promise.  But we should be more offended by this trite domestication of faith than disappointed at its failed promise.  Our communion with God in prayer is no mere strategy for domestic unity.  If we pray together so that we stay together, our prayers do not strive for heaven.  We break the first commandment.  We make the family a false god, put before the true God to whom we owe worship.

On average men are taller, have 60% more upper body strength, more facial hair, a deeper voice, are more aggressive and goal oriented.  On average, women are more tactile, more compassionate, more conciliatory and more interpersonal, speaking 5,000-10,000 more words a day.  Male nature is ordered toward provider-protector, while female nature is more the nurturer.  Woman, wife and mother occupy the heart of the family while man, husband and father must stand with a certain rigidity, with one foot in the home and one foot in the world.  Woman is ordered to relationship, while man is ordered to principle and duty.  Properly ordered, faith is rooted both in duty and relationship, but for 50 years, the clear emphasis has been on pastels rather than bold primary colours.   Religion has represented feminine virtues, best exemplified by Fr. John Powell’s “unconditional love”.  As a result, most Catholic men have stopped practising their faith, and as they have left, so have their children.

Twenty years ago, the Swiss government commissioned a study titled: “The Demographic Characteristics of the Linguistic and Religious Groups in Switzerland”.  It is an intriguing and much commented upon and and it reveals something very surprising and deeply important about family faith practises and the practise of faith among children.  S. Michael Craven of the Center for Christ and Culture provided this summation of the study’s findings:

Mother attends church regularly.  Father does not attend church at all:

Father attends church regularly.  Mother does not attend church at all:

What’s particularly striking in this data set is the straight line running from faith as a maternal inheritance on up through faith bequeathed by parents in harmony reaching a high point in faith as patrimony.  Faith as confirmation of maternal nurturing and compassion has very little purchase on the souls of the next generation.  On the other hand, faith of fathers, whose role in the family tends to focus on duty and consequence, is highly conducive to faith being practised by adult children.  This seems to be especially true when duty and consequence rise to the level of conflict with the maternal virtues of compassion and peace.

Like Abraham, our love for God must be greater than even the greatest of human loves.  Furthermore, the role of the father is as priest within the family, and the priest’s first duty is to God, and then to his people.  The single greatest cause of the implosion of faith has been the bloodless taming and domestication of faith.  But in fear and trembling this will resolve soon enough, in a manner best conveyed by two quotations, one from then Cardinal Ratzinger, the other, from Tertullian.  Cardinal Ratzinger famously predicted that we are heading into an age of the mustard seed church.   This prediction is being fulfilled even now.  Tertullian, also referencing a time of planting, said:  “the blood of the martyrs is the seed of the faith.”  We will not long have the luxury of feminized unconditional love.