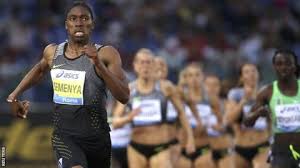 Thus endeth the 2016 Rio Olympics, with their share of oddities, but without major mishap or terrorist attack, God be praised.  Canada finished in the top ten of medal winning countries, so, with all of the caveats I have mentioned in the previous few articles, congratulations to all the athletes.

One final word on the future of athletics, as they already plan for the next conglomeration in Japan in 2020.  Maybe it is just me, but is there a certain ennui settling into the Games, a feeling of fin de siecle, an end of athletic history?

Predictions are notorious for being embarrassingly wrong, but we might guess that we have just witnessed feats that may never be repeated:  Usain Bolt in the 100m and 200m sprints, Simone Biles in gymnastic routines, Michael Phelps in just about every swimming event, Caster Semenya in the female 800 metres…

At least the first and the last aforementioned, if not others, raise the question of athletic enhancement, which creates an uneven playing field for the competitors.  The aptly-named Bolt blew away the competition; he can be seen smiling at his fellow runners in one famous photo, as he passes them with ease to the finish line, while they pump furiously, and futilely, behind him.  The silver medalist in the 200m, Canada’s own Andre deGrasse, who is a future hopeful, will never match Bolt (who has just retired), who has longer legs, more fast-twitch muscles, a whole set of physiological advantages that just make him a better runner. Usain seems to have pushed sprinting as far as it can go.   Or has he?

This picture becomes even more controversial, if you will, when we look as Semenya, who is a medically-certified hermaphrodite who, although listed as a female, has ‘ambiguous’ sexual dimorphism, with some male characteristics including, most significantly for these purposes, high levels of testosterone, with the concomitant muscle mass.  Caster was previously asked to take drugs to lower these levels to the ‘female’ range, but that ruling was removed as discriminatory, to the consternation of the other runners, including another Canadian, Melissa Bishop, who is a world champion, but came fourth by few seconds, but those few seconds make all the difference.  Should Semenya be permitted to compete with physiologically more ‘normal’ women?

Such ‘enhancements’, which are discussed in a series of articles by Malcolm Gladwell, are termed ‘endogenous’, since these athletes were born with them.  They won the genetic lottery, and, with accompanying hard work and training, took advantage of these to reach elite levels.  Their fellow competitors, who may work just as hard, or even harder, never really stand a chance.

To add to the controversy, are what are termed ‘exogenous’ enhancements, those with which we are not born, but add to performance by some sort of medical intervention, whether drugs or surgery.  These are generally disallowed:  Athletes are not permitted to raise their testosterone levels artificially with steroids, nor to dope blood, nor add to their oxygen-carrying capacity.

But why, we may ask?  Some artificial interventions are curiously permitted, as this article (amongst others you may find) points out.  I was surprised to find out that a number of elite athletes, including some top-level football and baseball players, and golfers (amongst them Tiger Woods) had laser eye surgery to improve their vision beyond 20/20, so they could, for example, see the lay of the greens more clearly, or the movement of the ball as it approaches home plate.  Baseball pitchers have had arthroscopic surgery to improve their throws.

What follows, we may ask, as we enter the next phase of athletic performance?  Carbon fiber replacements for joints, ligaments, even limbs?  Robotic parts, a la the Six Million Dollar Man? (who would likely cost billions now). Animal-human genetic hybrids competing in arenas?

These were once the stuff of science fiction, but no more.  They are all more-or-less real possibilities, and already upon us.

I leave you on this topic with the question with which I began:  What is the purpose of sports, as an activity for our own participation (which I would argue should be their primary goal), and/or as a spectacle, for our entertainment?  If the latter purpose predominates, or even takes over, then there are no bounds to what we may desire, to keep our flagging interest alive and well.  Why should 9.5 seconds be the limit for how fast we can sprint 100 metres down a track, or 1155 pounds for deadlift, or 47 seconds for 100 metre freestyle swimming?  With various interventions and a bit of technology, we could shave seconds off these asymptotes.

But what would that do to the human person?  What are we, and the athletes, willing to sacrifice to keep us entertained, and glued to our screens?

And so it goes, as we gear up for the next summer Olympics in that most technological of nations, Japan. If nothing else, it will be interesting to see what the future of sports holds.  But we should not fear to, indeed we must, ask the deeper questions behind all the spectacle.