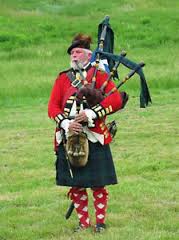 A bag piping Scotsman was recently fined in Montreal for carrying an ‘illegal weapon’, namely, his sgian-duh, literally his ‘black’, but more properly his ‘hidden’ knife, tucked into his thick Highland socks. I wondered at the triple standard:  Sikhs are permitted by law to carry their own ceremonial daggers, so why not bagpipers?  And the police in Montreal are still engaged in their own work defiance, wearing camouflage pants to protest a proposed change to their (unrealistic) pension plan, signifying a petulance and a defiance of their own law, unbecoming an officer of said law.

This is, as are most things, part of a bigger picture, namely, the selective application of the burdens of law.  Saint Thomas states that a promulgated law must be applicable to many, and if it is not proportionately applied in a reasonable way, it ceases to be a just law.  One cannot have a curfew, or a ban, or any limitation, for only a select group of people, with some ‘getting away with it’, unless there is clear, a priori and verifiable reasons why they should be so limited, such as 13 year olds driving, drinking or voting (and especially not at the same time).

So why Sikhs, and not Scots?  Are Sikhs naturally more careful, or less prone or random, unpredictable violence, with their daggers?  Then again, I suppose Scots are a volatile people, so perhaps should be more rigorously controlled. Next thing you know, they’ll be coming after our claymores…

The sad reality is that police, nor any security procedure, can rarely ever stop crimes a priori, especially of the random variety.  There is a serious side to knives and daggers, as the apparently random horrific killing of an Abbotsford teenager by a random drifter, and the wounding of another student, demonstrate (God rest her soul).  How does one protect oneself against such aberrant acts of free will or, more properly, liberum arbitrium?  The mystery of the human heart, and its capacity for evil, know no limits.  Again, as Saint Thomas states, following Aristotle, as man is the most noble of animals if he be perfect in virtue, so is he the lowest of all, if he be severed from law and righteousness; because man can use his reason to devise means of satisfying his lusts and evil passions, which other animals are unable to do.  The only way to stop such crimes is to instill virtue in the citizens, which is accomplished through the gradual evangelization of the culture through Christian principles of morality. Canadian ‘values’, and ever-greater police presence, cannot stop our descent into mayhem.

That is why the upcoming election in the United States, although significant, will not really solve anyone’s problems.  The difficulties with our society run deeper than that which can be ‘fixed’ by new laws and policies (although these may help).  Again, back to Thomas, who declares that custom, our ‘mores’ which flow from our culture, has the force of a law, abolishes law, and is the interpreter of law.  Trump may help instantiate better laws, which will ameliorate our customs, and Clinton will likely vitiate them, but it is ultimately up to us, each individual in the depths of his conscience, to choose between good and evil, truth and falsity, and so live in the light.  As John Paul II declared in his very first encyclical, that the Church’s focus is upon precisely this man in all the truth of his life, in his conscience, in his continual inclination to sin and at the same time in his continual aspiration to truth, the good, the beautiful, justice and love.

So let us too focus upon each and every ‘this man’ who enters the ambit of our influence.  For only such will truth, goodness and light grow, dispelling the darkness that is spreading over our land.