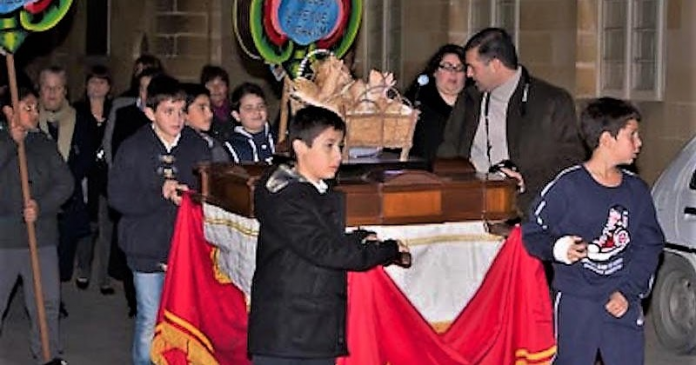 In the apostolic island-state of Malta, Christmas is very much lived and breathed, and much of this is due to the immense love and commitment invested by St Ġorġ Preca, Malta’s first canonized saint.

St Ġorġ Preca’s biography tells us that it was in the beginning of December 1921, precisely a centenary ago, when Fr Ġorġ Preca, a diocesan priest of the archdiocese of Malta, had the inspiration by God to put on a ‘demonstration’ with the statue of Baby Jesus on Christmas Eve. Perhaps he might have thought that this manifestation was just a temporary one. However, as the history of the Society of Christian Doctrine shows (M.U.S.E.U.M.) this Christmas tradition has been going on for the last 100 years!

From its inception Fr Ġorġ Preca wanted it to be a demonstration of faith. He wanted that this event would be characterized by that infectious joy the gospels speak loud about. Thanks to this demonstration Fr Preca wanted to highlight that the Baby in the manger at Bethlehem is truly God. Thus, he wanted to jubilantly profess this basic claim of our Christian faith as we find well written in the third chapter of the gospel of St John: God so loved the world that he gave his only begotten Son, so that whosoever believes in him should not perish but have everlasting life (John 3:16).

Amid the vivid Christmas spirit which was rampant in the 1921 Malta, Fr Ġorġ wanted to promote a visible gratitude of his fellow Christian brethren for God’s love of sending his Son to save us in the infant of Bethlehem. Like St Francis of Assisi Fr Ġorġ Preca’s life was captivated by the mystery of Incarnation. The code of arms of his Society of Christian Doctrine carries within it the fourteenth verse of St John’s gospel prologue: And the Word was made flesh and dwelt among us (Jn 1:14). The first Superior General of the Society, Eugene Borg, used to say that he and Fr Ġorġ would walk in the countryside in Santa Venera and the young priest would share with him the profundity of Christ’s incarnation. At one point Fr Ġorġ bluntly said to Eugene Borġ: These verses are difficult but they are the basis of our religion.

As the idea for a demonstration with the Baby Jesus started maturing, and decisively influenced by St Francis of Assisi, Fr Ġorġ wanted to demonstrate the power of the Incarnation to the man in the street. Hence, he managed to organise a demonstration among the byways of Ħamrun to profess his faith, as well as to his fellow members of the Society of Christian Doctrine that God became man for us and our salvation. Fr Ġorġ managed to include all at this demonstration to drive home the point that Christmas is for everyone since we all have been saved by Jesus Christ, God made man for all of us.

The inspiration which Fr Ġorġ had from God, eventually kicked off, and St Francis gave a decisive helping hand to Fr Ġorġ to realize his dream. A Society member borrowed a statue of Baby Jesus from the Conventual Franciscan Friary of Valletta. Many were the people who welcomed enthusiastically this first faith demonstration in the humanity of the Son of God Incarnate. That first Baby Jesus Demonstration was full of people carrying candle lanterns and bicycle lamps. History has it that some members brought paper balls and palm leaves too. In this way the Christmas Eve demonstration started, being backed by the Ħamrun residents who overwhelmingly enjoyed the celebration. Even if in their enthusiasm they did not obtain a police however the demonstration went on very well. It needs to be said that Fr Ġorġ counseled the members that if complaints would have arise they were to stop everything and go peacefully to the Society Centre.

As the procession went on the statue of the Baby Jesus was accompanied by the children’s carol singing of Adeste Fideles, and the most famous Maltese traditional carols, especially the Ninni La Tibkix Iżjed (Sleep don’t cry anymore). Such melodious carols and radiant lights can give a glimpse of the joyous intensity such a demonstration might have created in those days when the streets were dark only to be lighted by scarce dim lamps.

The popularity of the demonstration spread like wildfire, and eventually became part of the Christmas calendar of very town and city in Malta and Gozo. Slowly slowly this demonstration of faith became more organized. Every Society Centre started having its own statue of Baby Jesus in a manger together with the lights and banners worded with words which make us remember the Birth of Jesus. The focal point of the demonstration is the proclamation of Christ’s incarnation: Verbum Dei caro factum est (The Word of God was made Flesh). Nowadays this procession has been also organized in  Australia, Cuba, Perù, England, Poland, Kenya and Albania, the places where there is the Society of Christian Doctrine.

St Ġorġ Preca can be easily defined as the Apostle of the Verbum Dei. He commissioned the Maltese artist, Rafel Bonnici Calì, to paint Mary at the exact moment of her fiat to God with her joyous and trusting spirit. This painting, which depicts the Word of God Incarnate, shining resplendently from within Mary at the time of his entrance into her virginal womb, is commonly known as the Madonna of the Verbum Dei. The insigna, which Society members still wear nowadays, shows the deep loving devotion of Fr Ġorġ Preca towards thy baffling mystery of Incarnation. He wanted that this insigna be worn by everyone not simply Society members.

Thanks to the Society of the Christian Doctrine, in Malta nowadays there is a strong devotion to the nativity crib together with the Holy Child. These one can find in many families and public places too. Fr Ġorġ exhorted the members to give a crib to every boy and girl who attend the Centres to learn Catechism. Here one understands why the Society members spend entire months preparing for the coming Christmas by making plaster crèche figures and painting them to be given as gifts for these children.

Lord Jesus, with the intercession of St Ġorġ Preca, help us to believe, appreciate and let your incarnation change our lives. Amen.