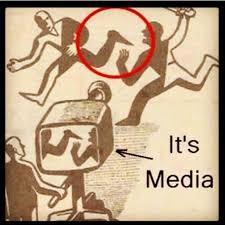 Modern television (or do we say internet?) programs, particularly on Netflix, and other media, have become radically explicit, both in violence and in sex.  Reading this article, even my somewhat jaded soul was surprised that such things could remotely pass for ‘entertainment’, to say nothing of actually being shown to a mass, and indiscriminate, audience.  Torture, bloody murder and child sacrifice, rampant adultery, fornication, immodesty galore.  We are now immersed in ‘pornography’, or, quite literally, the showing of evil for evil’s sake, and we scarcely notice.

I warn you of this, since I posted a brief review of the Daredevil series which, sure, has a certain number of moral problems, but so far, more or less (and I dare say, looking back, more less than more) evil is shown as evil, and good, as good.  But I have noticed the lines blurred, and the content getting more explicitly violent, for no apparent reason except to shock viewers even more jaded than I, apparently.

That is, until the other evening, where an episode had Daredevil in his Matt Murdoch guise (or is that the other way around?) caught in a very compromising position with his female superhero side-karate-kick Electra.  I probably should have foreseen this, and was getting a creepy feeling from the show, but, hey, I try to hope for the best, that one can view entertainment without compromising one’s morals and interior vision.  I suppose not.

There are two primary documents from the Church on media:  The first, Miranda Prorsus, is from Pope Pius XII in 1957, at the very dawn of the television age (Pius XI issued a radio broadcast using Marconi’s recently-invented radio twenty years earlier, followed by a letter on films a few years later).  The other is a very brief decree from the Second Vatican Council, Inter Mirifica.

Both documents have a rather optimistic view of the media, speaking to its great power for good, and appealing to the higher angels in Catholics and fellow travelers.  That said, although they both permit the portrayal of evil, they warn sternly against anything that might harm one’s morals, incite to evil or is  outright pornographic.

We have come a long way, and not upwards, from the days of Bishop Fulton Sheen, Milton Berle and the Disney hour.  Like the oft-quoted analogy of the frogs in the boiling water, even good Catholics, normally well-grounded, have been gradually inured to greater and greater voyeurism, until we justify just about anything in the name of ‘art’, ‘entertainment’, ‘relaxation’ or, even, ‘education’.  But what this does to our souls, to coarsen them, and prepare them to look upon evil with an ever-more-tolerant attitude, can only be imagined.

My greatest fear is how the children, lacking the spiritual and psychological defenses of adults, will turn out.  The generation now growing up has been immersed in such ordure from birth.  How will they ever gain a sure moral foundation, with so many pornographic images embedded deep within their young brains and souls, the phantasms welling up throughout one’s life?

One must carefully discern what one, and more one’s children, take in, for an image once seen, can never be unseen.  As you do so, try to unplug for a time, take up a good book, play some instrument, spend some time in the church, visit a friend, cook a hearty meal, go for a walk or bike ride, clear one’s mind and soul, breathe in God’s good fresh air, both naturally and figuratively.  Far better than Game of Thrones, or worse.  And, as a wise man once told, just before you think it has gone as low as it could go, it could always get worse.