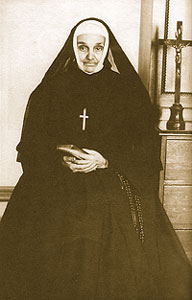 Bd. Marie-Anne Blondin (+1890), whose feast was just the other day, and of whom you may never have heard, founded a religious congregation of Sisters to teach young people in Quebec, most of whom were illiterate (the children, not the Sisters); apparently, there was a local Church law that forbade students being taught by members of the opposite sex. To her credit, Bd. Marie-Anne persuaded the bishop, Ignace Bourget, to go out on a limb, and allow her to give a go at teaching boys, and it seemed to work well; hence, the Order, the Daughters of Saint Anne (along with a number of other teaching orders), who have instructed and forms legions of young boys (and of course girls) in this fair nation. Sure, they were disciplined and strict, but also virtuous and full of zeal, and students learned.

But Bd. Marie-Anne suffered: A conflict with the chaplain appointed by the bishop, one Abbe Louis-Adolphe Marechal, who seems to have arrogated power and authority well beyond his right (including forbidding the Sisters to go to confession to any but himself), resulted in her reputation being ruined, removed from leadership, spending the last half of her life in obscurity, performing menial tasks in one of her convents, and denied any position of authority. She did not complain, and before her death asked pardon from Fr. Marechal. It was not until after she was gone that they realized they had had a saint in their midst (as many of us will realize someday, for saints do walk amongst us). Bd. Marie-Anne Blondin was beatified by Pope John Paul II on April 29, 2001.

It does not take much imagination to wonder whether or not education has improved with the near-universal loss of religious teaching Sisters, and the development of our modern lavishly- funded schools, Catholic or not, with their cafeterias, gymnasia, labs, diversity-training, ecumenical prayer-rooms and well-remunerated teachers.

There are signs of hope, like Wayside Academy (where the Sisters of Our Lady Immaculate are now teaching), Mary Mother of God (celebrating its 25th anniversary this year), Pillar Academy and others doing what they can with limited means and lots of sacrifice to re-instantiate truly Catholic education. May Blessed Marie-Anne Blondin, support and intercede for them, and for all of us.

While we’re on public funding, one Dr. Danielle Martin, a family physician, was on the CBC this morning advocating the proposed bureaucratic behemoth known as Pharmacare. As the doctor put it, everything else in health care is covered, so why not the drugs also? She argued that this would be less expensive, as the government could buy medicine ‘wholesale’, and in ‘bulk’ and, of course, oversee distribution.

Alas, Dr. Martin’s words are a sign of the failure of our educational system (where were those Sisters?), and our culture in general. Technically proficient, perhaps, but she knows little of socioeconomic principles, and is apparently unaware, or perhaps even supportive of, the government controlling even the most intimate aspect of our lives, including what medicine we take, or do not take, or, more to the point, would be permitted or not to take. For he who pays the bills, quite literally calls the shots you get. And just as our children are taught just what the State wants them to be taught, nothing less, nothing more, so too, in the realm of therapeutic drugs, if the government can decide to pay, then it can also decide not to pay. And with euthanasia now fully legal, why would they (that is, the invisible bureaucrats who will decide these things) pay for expensive meds to keep someone alive, when a quick lethal shot is far, far less expensive? And who’s to say which meds one can have? Will we be able to go outside the system, and pay privately for something not covered, a practice that is currently illegal for any other physician-provided health care service? (We will except the ‘elites’ who, of course, have their own cadre of physicians and such. Do you think Justin Trudeau, or any high-up government apparatchik waits in an urban emergency room?).

Besides the moral issues involved, Ontario’s financial picture was just downgraded by Moody’s Investor Services to ‘negative’. I wonder, or rather worry, whether the ensconced and feted likes of Dr. Martin, whom we may count amongst the ‘elite’, are even aware that the whole economic system, provincial and federal, is tottering on the brink of what may well be irrevocable financial insolvency. Pay for everyone’s medicine as well their physicians, nurses, health care, education? What could possibly be next, a guaranteed income for one and all?

Sometimes, you just can’t catch up to the future.