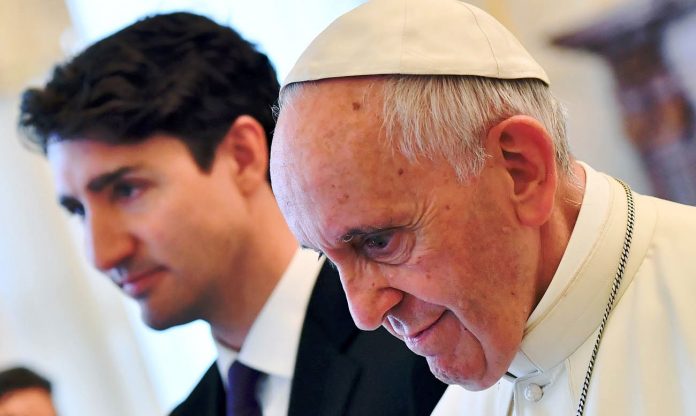 This story and its characters are (mostly) fictitious, and it is (generally) not inspired by true events. But if the events could yet prove to come true, that would (truly) be something.

Their entourages exited the conference room, leaving the Pope and Prime Minister alone.

An awkward silence ensued. Both leaders had not exactly been attentive during their meeting. Keen for things not to veer further downhill, the Prime Minister spoke. “Holy Father, I trust you have enjoyed your visit?”

The chief parliamentarian tried another tack. “I hope you have felt welcome by our communities?” His guest offered another lukewarm reply, mumbling about the people’s well-earned reputation for politeness.

Sensing something amiss, the Prime Minister nervously posed his next question. “May I ask, Your Holiness – are you feeling alright?”

The Pope closed his eyes and inhaled deeply. “Last night there was no rest. It was impossible, thanks to my visitor.”

From confusion to intrigue to horror, the Prime Minister’s face exhibited the mix of emotions triggered by this unsettling news.

Observing his host’s unease, the Pope proceeded to explain. “Tranquilo, Prime Minister,” he said in his native Spanish. “It’s not what you think.” The Pope paused, seemingly acknowledging the absurdity of his impending testimony. “I was visited by someone who died almost 400 years ago.”

Hearing this, the Prime Minister turned pale and his heart pounded.

The Pope continued his account. “My visitor was St. Jean de Brébeuf, your country’s famous martyr and the beloved member of my priestly order. He appeared and said that the good shepherd neither strays nor lets his sheep wander. He told me to gather the lost and to return us to the mission.”

Struggling to suppress panic, the Prime Minister stammered, “How did you know it was Brébeuf?”

The successor of Peter intuited a deeper significance to his host’s discomfort. Unable to pinpoint it, however, he carried on.

“It was undoubtedly the great saint himself. He wore the ‘blackrobe’, as your first peoples called it, of the early Jesuits. Everything matched the paintings and the stories – the beard, the calmness, the confidence. And from head to toe were the wounds of his torture by the natives.”

The Pontiff closed his eyes again. He sighed, cocked his head towards the Prime Minister and said with a faint smile, “You must think me a crazy old man.”

The politician sat still, as if in a trance. After an extended silence, he murmured hoarsely, “You’re not crazy, Holy Father – the same thing happened to me.”

The churchman’s head shot up, eyes opened wide. The force of his reaction caused his wheelchair to roll backwards. Steadying himself, the Pope leaned forward intently and motioned for detail.

The next sentences were difficult for the statesman. “As soon as I fell asleep, a man appeared. He told me that I had wandered and was lost. He told me to repent and not to despair, for the good shepherd would find me, gather me into his arms, and return me to the mission.”

“And this man,” asked the Pope keenly, “you think it was Brébeuf?”

“I’m sure of it,” came the reply. “He matched the description of your visitor. And he told me how sad and sorry he was that I turned away from God during high school. You see…my school was named in his honour.”

The Pope hurriedly reached for the binder on the table emblazoned with the Holy See’s emblem and flipped to his counterpart’s biography. There it was, under the short section on education: “Collège Jean-de-Brébeuf.” The Pope leaned back, covered his gaping mouth and pondered these revelations.

An eternity seemed to pass. At length, the Prime Minister hazarded a query.

“Holy Father, how can we go to where Brébeuf was a missionary? That’s thousands of kilometres away.  Your flight home leaves soon and we’re already late for the press conference. I don’t understand.”

The Pope cast a tender glance on the younger man of politics. “Our saintly friend isn’t directing us to a place. He’s guiding us back to the path of everyone marked with the seal of baptism. The path of proclaiming the Gospel to all nations and winning souls for Christ. Search your heart, Prime Minister – is that your current path?  Is that your mission?”

The head of government shifted uneasily. These words pierced. “But Holy Father,” he protested, grasping to escape the walls closing in, “You bring everybody together. The Church has never been more inclusive. How could Brébeuf say such things to you?”

The Pontiff folded his hands and took a long breath. “He said such things because he speaks truth. I’ve been distracted and my sheep have scattered. It’s time for me to gather them in.”

What followed shocked the Prime Minister more than anything that had yet transpired. His octogenarian guest stretched across the table, removed the flowers from the centerpiece vase and grabbed the adjacent decorative bowl. Positioning both items at the table’s edge, the Pope rose abruptly from his wheelchair. Dismissing his host’s desperate pleas to sit down, the Pontiff made an unsteady descent to the floor. Excruciating pain coursed through his body as his weak knee assumed its share of weight.

Just when he thought the scene could not become more incredible, the statesman saw his own shoelaces being untied. He reflexively withdrew and, forgetting himself, shouted, “What are you doing?!”

With disarming strength, the old man on the floor firmly gripped his host’s foot. Looking up with eyes full of zeal, the Pope asserted with conviction, “I’m reminding you, myself and our Lord that the good shepherd is the servant of servants. I’ve allowed both of us to stray too far for too long. Today I atone.”

With that, he removed the Prime Minister’s shoes and socks. Reaching up, the Pope took the vase and bowl from the table. He moved the vessels into place, poured out water from the vase and washed the naked feet with his hands. Throughout, he whispered prayerfully, with only the occasional audible fragment: “the road to hell is paved with skulls…no servant is greater than his master…deliver us from evil….he will forgive our wickedness and remember our sins no more.”

The footwear was refitted, the tableware returned and the agonizing struggle repeated itself as the Pope hoisted himself back into his chair. The bewildered Prime Minister expected to see a face flushed with fatigue. Instead, the Pope’s appearance was radiant.

“And now,” said the beaming Pontiff, “Your turn, Prime Minister.”

With his host eyeing the vase and bowl apprehensively, the Pope shook his head with a gentle smile. “No, nothing for my feet. Follow our saintly friend’s instructions. Ask for the mercy which Brébeuf sought with his dying words. Repent and believe in the Gospel.”

The Prime Minister felt an indescribable movement in his interior depths and beheld his guest anew. Instead of a world leader, he saw only a shepherd. A phrase came back to him from his childhood of the greater rejoicing in heaven over the repentance of the one than the righteousness of the ninety-nine.

As if ensnared by an unseen hook and invisible line, the legislator lowered himself to the floor in a kneeling posture. The next sensation was that of his right hand touching his forehead, then his chest, followed by his two shoulders. The words that ensued seemed inspired from without, but were freely embraced from within. “Bless me Father, for I have sinned.  I’m afraid I can’t remember the last time I…”

Time stood still for penitent and priest. With the admission of each transgression, there was shared sorrow and softening. No shadow nor stain was left undisclosed: pride, powers and principalities; disobedience to the heavenly father, anger against the earthly one; unobserved Sabbaths; false witness; the flesh; and so on.

By the end of his confession, the Prime Minister had soaked with tears the sleeve of the clerical garments upon which he was resting his head, and the Pope’s arm was wrapped around him in comfort. He was accompanied through contrition. The words “Ego te absolvo” were pronounced – and grace abounded.

Wiping his eyes dry, the politician looked at his pastor and asked, “What comes next?”

The Pontiff’s eyes twinkled. “Penance!” He spun his wheelchair around and sifted through items on the table. A cry of “Aha!” arose, as he located a red pen and the press release prepared to mark the conclusion of his visit. “We’ve promised to amend our lives – let’s start by amending this gibberish.”

In short order, the communiqué’s verbiage on inclusive capitalism and Mother Earth was replaced by a narrative on the sanctity of life and the healing power of the Cross. The Pope placed the marked-up paper before the Prime Minister. “Join me in this mission and be reconciled with God and His Church.”

The politician examined the document and his soul stirred. He then paused and glanced at his guest with furrowed brow. “Holy Father, I don’t think I’m ready – or worthy.”

The Pope leaned forward with a mischievous smirk. “Welcome to the team, my son.”

The two leaders embraced fraternally and gathered their belongings. The Prime Minister wheeled the Pope out the room and they turned towards the press gallery, with spirits and hearts ablaze.

(Patrick Owen Brown is the host of the Crown and Crozer podcast, on which yours truly will appear – in audio – tomorrow. So stay tuned, and tune in!)