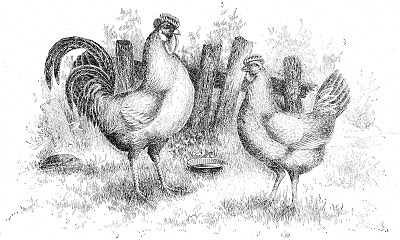 The chickens came to us from a situation of overcrowding. There was a red rump here or a de-feathered neck there, but they were none the worse for wear. I had been assured that having chickens would be easy (let the record show that I am a documented plant murderer) and that they would require little more than a splash of water, some kitchen scraps, and a handful of feed every once in a while. No sweat, I thought. How hard can it be? I was uneasy about the answer to that question, but we were determined to try.

On day one a hen laid an egg. AN EGG! WOO HOO! I ran into the house and quickly fried it up next to an egg bought from the grocery store. Ours was delicious and flavourful with a bright orange centre. It was so much better than the cardboard store-bought variety. It had to be. It was fresh out of a chicken.

The second day, I was outside in the henhouse before I was fully awake, greedily looking for breakfast. I reached into the nesting boxes and pulled out two eggs and a golf ball. Puzzled, I asked my husband about the funny joke. He looked at me blankly and said it was not him. And either he is exceptionally good at lying directly to my face or he really did not do it. I went with the latter and ever since have had no more questions about where golf balls come from.

By the end of the third day, I was chomping at the bit to check for more eggs. I went to sleep with chickens on my mind, and woke up thinking about eggs. It is amazing, isn’t it? Food—coming from animals? With thoughts of glee and visions of omelettes in my head I traipsed outside, unlatched the door, and wedged myself sideways into the narrow coop, careful not to step in any chick-a-dee-doo.

As my face rounded the corner of the nesting box, I came beak-to-beak with a CHICKEN. Its wee beady eyes glinted at me. Its talons were at the ready. I instinctively felt it was going to fight me for its precious almost-children. So I did what every self-respecting 35-year-old adult would do. Protecting my eyes, I shrieked and ran as fast as I could back to the house. Panting, I relayed the almost-deadly encounter to my husband. “Chicken … attacked … me … almost … talons …”

He laughed and asked if I wanted to know how to extract eggs from a roosting chicken. (How could he be so calm? Risk having my eyes pecked out? No way!) At that moment I established my firm no-chicken-butt-touching policy that remains in effect to this day.

The chickens have not been all fun and games. Just a few weeks ago my husband went out to feed and water them and found one of them motionless, on her side, in the corner of the coop. We brought her inside and laid her in front of the fire for a bit, with some food and water to coax her back to life. But she did not wake up. As it turns out, she had something called a prolapsed vent. We put her in a plastic bag and “buried” her in the garbage. I felt a little bad doing that, but it is minus thirty outside these days. We could not do anything else with her. So four chickens went down to three.

Hubby went out the next morning to find another three eggs in the nesting box. We had been getting three eggs a day for a few months previous to the Death of the Chicken. We had thought it might be because chickens take turns laying or perhaps it was too cold or perhaps it was not light enough outside. But turns out Ms. Prolapsed Vent had been freeloading for quite some time. God rest her chicken soul.

But all things considered, these little chicks are a sweet addition to our growing homestead. So far we have had a dog and one road-rescued turtle named Myrtle (who is a whole other story) but the chickens are by far the most useful of the creatures we have kept around. They are (mostly) still alive after six whole months in our care. Praise the Lord. They are laying a good three eggs per day—enough that if we do not eat eggs for one day we have more than enough for custard the next. And the little darlings are so grateful for every scrap I throw them. Like a pack of ravenous wolves they devour everything from kale to lamb chop remnants. They are not picky. Mama done raised them right.

And as it turns out, they truly are easy to care for. People were not lying when they said they only needed water, some scraps, and a bit of feed. They are not noisy as we do not have a rooster, they are not stinky as we do not have too many for the space, and they are great watchdogs to have around clucking and be-gawking anxiously when something nefarious is near. In fact, we are thinking of expanding our little flock to include a few more layers and perhaps some meat birds (I am learning the lingo—I am a totally serious chicken-raiser now) and perhaps we will sell the extra eggs for some “serious” dough. We will see. For now, I am just enjoying them for what they are: suspiciously curious, egg-producing garbage-eaters.