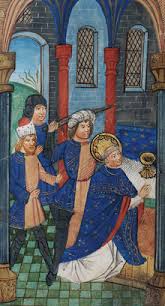 A blessed continuing merrie Christmas to all our readers, as we celebrate all these twelve days, right up to the Epiphany and the Baptism of our Lord. So keep those lights and candles burning, the decorations up! Christmas has just begun!

Today is the memorial of Saint Thomas a Becket, the glorious bishop of Canterbury – in its own glory days before its usurpation by the Anglican reformers, which is to say, by the State and her minions. Thomas was martyred on this day in 1170, a century after the cathedral’s completion, offering his life for the rights of the Church, as independent of the King. Henry II’s encroached upon the Church’s lawful autonomy, to the resistance of his former friend, Thomas, whom he had appointed bishop of the primary see of England. The king’s ungoverned anger and harsh words led to Thomas’ murder before the altar in his own very cathedral – a sin for which Henry repented publicly. But what Henry began another Henry – an unrepentant one – would bring to completion four centuries afterward in the bitter fruit of the Protestant ‘reformation’. As a definitive sign of the end of what was once England, Henry VIII had the shrine of Becket – the destination of the Canterbury Tales pilgrims, and the most popular holy site of England, along with Walshingham – destroyed in 1541, and the martyr’s relics dispersed to the four winds, which is about where the faith of England is now going, or gone.

I must confess I find it rather odd that the great English poet Thomas Stearns Eliot could write a brilliant dramatic play on the murder, yet not see the deeper issues at work, that Becket’s death presaged the loss of the Faith in England, that Anglicanism has not the foundation to withstand the assaults of secularism and, now, Islamism, and is now in its own death throes. There is only one, true Church, as countless martyrs before and after the bishop Thomas saw so clearly, and for which they were willing to suffer and die.

Please do feel free to peruse my thoughts on Canterbury upon my pilgrimage there last summer.

While on the theme of England, Sister Wendy Beckett has also gone to her reward, a semi-contemplative nun who garnered unlikely fame as a televised art critic, whose BBC show was watched by millions, and her books read by the same numbers. From what I could garner, her vocation was, shall we say, unique, beginning as a teaching sister, then an enclosed contemplative, then living in a mobile home on the grounds of the Carmelite monastery as a consecrated virgin and ‘hermit’, spending two hours a day to earn her living. Hmm. Although I may not agree with everything she said or wrote, Sister did popularize many great works of art, which she often discussed from a religious perspective –as all art ultimately should be seen. May what good work and example she offered live on in eternity.

Yes, there is always a tinge of sorrow in our feasts, as I wrote the other day, for some more than others, for the world does not cease to be a vale of tears, and people lose loved ones, in tragic, unnecessary ways, bombings, terrorism, murder and mayhem. But what feasts do give us is hope in the midst of what would otherwise be tragic despair, and light in an otherwise stygian darkness.

And many brokers are despairing, as the stock market continues its roller-coaster ride, signifying the fragility inherent in our global economic system, so prey to fear and panic. David Warren has a fine piece on the fakeness of so much of our economy, with a good portion of it now run by ‘robots’, algorithmic machines which not only build much of our ‘stuff’, but now also do much of the trading, ever more disconnected from the very humans the economy is supposed to benefit.

And China seems to be continuing its tit-for-tat game in its punitive measures against Canada for the detention of Meng Wanzhou, the Chief Financial Officer of tech giant Huawei, whom the United States wanted deported. Now President Trump says a trade deal may be reached with China, in exchange for lenient treatment of Ms. Wanzhou, placing Canada in a very precarious position between the two nations, who control much of the world’s economy and military power. China’s is – to put things mildly – not a morally sound regime, founded as it is on Communistic principles, governed by a totalitarian oligarchy with little respect for the rule of law, and almost none for natural law. Woe to be a Canadian in China, much less a Catholic, unless one wants to be martyr; not a bad calling, but only for the right cause.

We’re not much better in our own Dominion, as I was pondering in light of yesterday’s feast of the Innocents, for our own Trudeau has his own dictatorial tendencies, and his vehemence for ‘abortion rights’ seems bizarre even by his own ‘values’. No limits whatsoever for all nine months of pregnancy, and even a bit beyond with the visible barbarity partial-birth abortion? If society ever returns to sanity – something of which I am almost in despair, seeing, on the contrary, more and more the ‘gradual ascendancy of evil’ of which the Catechism warns- Trudeau and his compliant Liberals, along with all of us as a nation, will be judged rather harshly. If Christ brought down woes upon Bethsaida and Corazin, what are we to say of Canada, with the blood of millions of her children on her hands, and now the murder of the elderly, the sick, women and children? Still, hold your heads high, and do what you can to spread the truth, in what ways we are able, with boldness, and with confidence.

And on the note of witnessing, two University of Laurier professors are suing Lindsay Shepherd for recording her disciplinary meeting, during which said professors’ rant against Jordan Peterson and their gestapo-esque browbeating of Ms. Shepherd went viral, to near-universal condemnation and mockery. All I can say is, may more of what passes for ‘education’ in the halls of academe be exposed to public view, and I sympathize with those who must suffer the ideology of the modern university, which offers anything but universal truth; and now the bully boys are using the full brunt of the legal system to intimidate whistleblowers like Ms. Shepherd, and cover up their sad, pinched little world, all generously supported by the State and our tax dollars.

All I can say is, may the truth win out in the end, as it will.