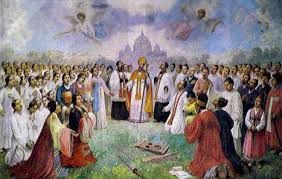 Today is the feast of the countless martyrs of Korea, led by the indomitable convert priest, Father Andrew Kim Taegon, who was eventually tortured and beheaded by the shores of the Han River in 1846 at the tender age of 25. Thousands more were likewise killed for their faith, 103 of whom were canonized by name by Pope Saint John Paul II in 1984.  Pope Francis beatified 124 others during World Youth Day in Korea in 2014.

Their work and their witness were not in vain:  Korea today, by which most people mean ‘South Korea’, is by majority secular and atheistic, but still boasts a nearly 30% Christian population amongst its 51 million, about 11% of that number Catholic. And from what I have heard – and seen, since I have met a few of them – they are in the main zealous and orthodox. But there is still much work of evangelization to do.

North Korea, usually specified by its geographical adjective, on the other hand, was divided from Koreans in the south after World War II in 1945, when so many countries were given over to the insidious evil of Communism.  A puppet regime was set up, which still exists today, suffering under the ridiculous, but fanatical and dangerous and evil antics of Kim Jong Un and his loyal henchmen.  The country is more or less atheistic, under the cult of what passes for the personality of its ‘great leader’.  Christians make up less than 2% of their own 25 million population, all of them hidden and underground.

There is still much work to do in Korea, presuming that the great dictator to the north does not do something apocalyptic, like drop one of his dozen or so nukes on his neighbours to the south.  An article claimed that the insane North Korean regime has been, and still is, propped up by the United States, for fear that something worse would come along should the great ‘Kim’ fall, and his nuclear arsenal itself fall into the hands of who knows whom.

Such is realpolitik in today’s world.  A fragile balance of power, on the brink of who knows what. But we Catholics live in real spiritual-tik, where God’s law, not man’s, reigns.  As the reading from Proverbs declares,

‘the king’s heart is a stream of water in the hand of the Lord; he turns it wherever he will’

And as Christ would later paradoxically teach Pilate as He stood bound and scourged before him, that the Roman potentate would have no authority, had it not been given from above.  God will remove the tyrants in His own good time, and in the meantime, we must live under persecution, even bloodshed.  What’s the worst that can happen? We must give up our lives? But that means eternal bliss, a joy that the young Father Kim Taegon declared in his own troubled days:

My very dear brethren, know this: our Lord Jesus, coming down here, himself suffered pains beyond counting: by his Passion he founded the Church and by the passion of his faithful he makes it grow. The powers of this world may well oppress it and attack it, but they will never have victory over it. After the Ascension of Jesus, from the time of the Apostles until now, the holy Church has grown everywhere in the middle of persecution.

And as his own life ebbed away:

This is my last hour of life, listen to me attentively: if I have held communication with foreigners, it has been for my religion and for my God. It is for Him that I die. My immortal life is on the point of beginning. Become Christians if you wish to be happy after death, because God has eternal chastisements in store for those who have refused to know Him.

So let us intercede with the martyrs that many will not ‘refuse to know him’, but, as Christ exhorts  the people, rather they hear the word of God, and keep it.