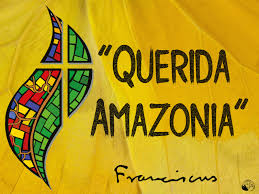 A few words on the post-synodal letter on the Amazon, Querida Amazonia. ‘There is much upon which to ponder in the document, and I would recommend a read through, so please permit my pointing out a few warning signs, whatever may be intended by them. On that note, the document seems to satisfy neither conservatives or liberals, even if those terms are rather limited as applied to the Church.

On that note, one may find any number of reviews and summaries, so just a few sentences from yours truly, after a read-through the document this morning: There is much that is good and hopeful: A call for holiness, and emphasis on the Eucharist and Confession, which only ordained priests may offer; no explicit call for abandoning priestly celibacy, nor for deaconesses, nor for any major change in discipline or doctrine; an awareness of the difficulties involved in that vast and remote region, the need to preach and nourish the poor. But there are also excerpts offering some level of hope or fear, depending on your point of view.

First, the title, ‘Dear Amazon’ – I’m not sure what to make of calling a region of rain forest ‘dear’. Perhaps better ‘dear people‘ of the Amazon. A quibble? This is not helped by the anthropomorphic description of the region – with the ‘blood’, the ‘bleeding’, and the ‘veins’ of ‘mother Earth’. The Holy Father also persists in his fear of anthropogenic, carbon-caused global warming, the evidence for which, behind the ‘veil of consensus’ and computer-modeling, is rather slim.

And what of revelation itself? The term is stretched to poetic limits in the following:

The very flowers of the field and the birds which his human eyes contemplated and admired are now imbued with his radiant presence”. For all these reasons, we believers encounter in the Amazon region a theological locus, a space where God himself reveals himself and summons his sons and daughters.

God may ‘reveal’ Himself in nature, and we all may ‘see’ God in the great outdoors, but this is not quite the same as a ‘theological locus’, a term usually reserved for specific historical places – written texts, the Scriptures, the Liturgy, or apostolic persons – wherein the Almighty has offered some aspect of His eternal salvific truths.

As readers know by now, I am no fan of theological ambiguity, and a passage like the following provides enough through which some future interpreter might one day drive a truckload of married priests, children in tow:

Nor is there room, in the presence of the poor and forgotten of the Amazon region, for a discipline that excludes and turns people away, for in that way they end up being discarded by a Church that has become a toll-house. Rather, “in such difficult situations of need, the Church must be particularly concerned to offer understanding, comfort and acceptance, rather than imposing straightaway a set of rules that only lead people to feel judged and abandoned by the very Mother called to show them God’s mercy” (#84)

And what of the Pachamamas and other seemingly idolatrous images, statuary and their veneration, if not apparent worship?

It is possible to take up an indigenous symbol in some way, without necessarily considering it as idolatry. A myth charged with spiritual meaning can be used to advantage and not always considered a pagan error. Some religious festivals have a sacred meaning and are occasions for gathering and fraternity, albeit in need of a gradual process of purification or maturation. (#79)

But what if it looks and walks a lot like a ‘pagan error’? Are all such wayward religious practices able to the purified and matured in a Catholic sense? One ponders the 17th century Chinese Rites controversy, but this seems somehow one step further.

And we may fear that Gregorian chant, polyphony, Latin, church architecture – the whole Greco-Roman-European milieu in which the Faith took its traditional form – may be in a bit of trouble:

There is a risk that evangelizers who come to a particular area may think that they must not only communicate the Gospel but also the culture in which they grew up, failing to realize that it is not essential “to impose a specific cultural form, no matter how beautiful or ancient it may be” (#69)

What of those historically-embedded aspects of the ‘Roman Catholic Church’ – her music, buildings, philosophy, theology, described so eloquently by Pope Benedict in his 2006 Regensburg Address – which may not be arbitrarily discarded?

There are indeed serious issues facing the Amazon, and the document indeed raises these issues, providing some initial hopes for an answer and a response. But whatever is done, I don’t think the people of South America need an ‘Amazonian church’. Whatever adaptations are made, the people of South America – and everywhere in God’s good earth – need the Catholic Church, one, holy, Roman, apostolic, integral, transcendent in her historical glory and grandeur, and the one path of salvation to all mankind.