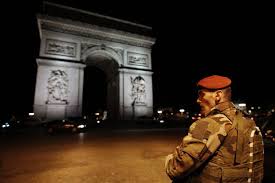 (There are another terrorist attack in France yesterday, in Paris, near the Champs D’Elysees, a police officer targeted and killed with the usual suspect, ISIS, claiming responsibility.  To be more particular, it was a lone gunman, who had already been arrested, spending 15 years in jail for the attempted murder of two other police officers in 2001.  I suppose France will never learn, or at least learn the hard way. You see, ISIS and Islamic terrorism in general, need not kill many, nor often; just enough to keep the whole nation on edge, under ridiculous levels of security.  You don’t need to poison all the jellybeans in the jar; just one or two, and people will leave it well enough alone.  What does it take to keep people inside their homes, fearful to wander the streets, especially under the Parisian moonlight? Not much, methinks. To break the will and confidence of the people is the primary element in war, or any combat really.  Not that France is in all that healthy condition to begin with, recently outlawing any ‘pro-life’ or, excuse me, ‘anti-abortion’ websites, as they may traumatize women who have chosen this ‘option’.  Not that too many women choose to have children in France to begin with, boasting, if such is the word, one of the lowest birthrates in the world.

So, here is a re-post of something I wrote a year and a half ago, on another terrorist attack in France in 2015, where I, and all too many, predicting more of the same to come…Editor)

The massacre in Paris yesterday marks the beginning, we may presume, of other tragedies to come.  Well over one hundred dead, hundreds more injured, with a bomb going off in the Stade de France where President Hollande himself was taking in the French-German football (soccer) match.

Our first response is to pray for the victims and their families, but there must also be a practical, this-side-of-eternity response also.  Mr. Hollande’s promise to ‘wage a war without compromise’ sort of misses the point:  This is not a ‘war’ in any traditional sense of the word, for there is no ‘nation’ attacking France, unless one includes the vague and indeterminate ‘nation of Islam’.  But that is just the point:  The enemy himself is ‘vague and indeterminate’.  He does not wear a uniform, he may be from any nation, indeed, he may be born on the very soil of France, he may even swear allegiance to all that France (or name your country) holds dear.  For in Islam, lying to the infidel is no crime or sin at all (at least, we may presume, in the ideological interpretation of ISIS).

Whom does Mr. Hollande plan to capture and jail?  It is illegal in France to take a census  based on religious affiliation, but the estimates are that 5-7% of France identifies as Muslim, which translates to about 3-5 million people.  Of these, one poll estimates that one in six supports the aims of the ‘Islamic State’, otherwise known as ISIS:  Here is the Washington Post earlier this year:

And when it comes to levels of extremism within France’s Islamic community, attitudes are again hard to ascertain. One recent poll suggested that 1 in 6 French citizens supported the Islamic State militant organization.

If true, that is about 640,000, more than half a million, Muslims who may be supporters of the radical, no-holds-barred, torture-as-you-may, throat-cutting barbarians of ISIS.  As the articles warns, we must take all such polls with a large grain of salt, and very few Muslims are terrorists, but a number of them seem to sympathize, and are open to ‘radicalization’.  Even if it is only 1%, that amounts to thousands of would-be terrorists in your very midst, who are already citizens and have full rights thereof. How many unemployed, disaffected, even angry, young Muslims are there in the vast, bleak, impoverished, concrete wasteland bainlieues of the Parisian suburb just waiting for some ideology to guide their lives, to give them a purpose, a plan?

Even the majority of ‘moderate’ Muslims who disdain any connection with terrorism and live quiet lives as good citizens still venerate their founder, a man who spread his religion by sword and by coercion, whatever the Qur’an might advocate of modern ‘jihad’ one way or the other.

If this is a war, it is a war of ideology, of culture and ultimately of religion, and can only be won on those grounds.  But France, once the ‘eldest daughter of the Church’ has by and large lost her faith.  In a curious irony, the concertgoers who comprised most of the dead and wounded were there to hear the band ‘Eagles of Death Metal’.  Likely the ISIS terrorists (presuming it was indeed them) knew and planned this, as part of their war against the ‘Great Satan’ of what they perceive to be decadent Western culture.  So much, at least, for ‘death metal’ culture in France; who is going to attend one of their concerts now?

What really is holding France (or Germany, or Canada) together?  For what is she fighting, and what is she defending?  French cuisine and art?  The ‘freedom’ to do whatever it is one wants?  Who is at war with whom?  Back in the days of Charles Martel, who defeated the Islamic hordes invading from the south in the great battle of Tours in October of 732, France was a united country under the Catholic faith and the cohesive culture to which that faith gave rise.  She knew for what she fought.

But now, in November of 2015?  France, along with most of Europe, is in a demographic and cultural death spiral, and has allowed Islam, in its multifold forms, to fill the vacuum.  Germany is even further down the road to dissolution, as Chancellor Merkel seems intent on allowing an unending stream of vigorous, young male ‘refugees’ through the borders with scarcely a security check.  At least one of the suicide bombers in France was found with a Syrian passport on his mangled body.

I know not what the future holds, but, from the looks of things today, not good for France, nor for Europe.  On a minor but significant note, the Irish band U2 has already cancelled a planned concert in France, and Paris, the number one tourist destination in the world (up until now) will likely see many more such ‘cancellations’ in the near future.  France has closed her borders, imposed a curfew, and is under martial law, with ten thousand army troops deployed to ‘walk the streets’, an unprecedented move since the darkest days of World War II.  The terrorists have already won by fear.

In the meantime, we pray for the dead, the wounded and their families and, yes, for the perpetrators of this carnage.  May God have mercy on all.