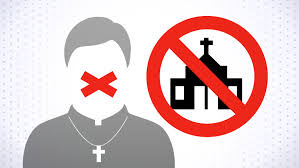 President Trump, to his credit, yesterday eased the restrictions of the Johnson Amendment, named after Lyndon B. Johnson, who in his time as Senator in 1954 proposed that non-profit organizations, including universities and churches, should be restricted from speaking on politics. In particular, they would not be permitted to ‘oppose’ a political candidate.

Johnson’s amendment was an attempt to maintain the fictitious and impossible ‘wall of separation’ between church and state, a misinterpretation of the original Constitution, which would be reiterated by the future President Kennedy in a speech in Dallas in 1960.  Americans feared Kennedy would impose the teachings of the Catholic Church on the land.

Is it ever possible for man to detach himself from his religion and his conscience? Man is a seamless being, unitary in body and soul.  We can leave neither our conscience nor our religion at home, when we go to work or vote or do anything else in the world.  The documents of Vatican II declare that our conscience must be ‘integral’, not porous, haphazard.  And that conscience should be formed in various ways, not least in the churches we attend, where priests, pastors and rabbis should be permitted to speak their own minds, applying the supernatural truths of religion to all aspects of life, not least politics.

Of course, as Pope Leo XIII taught, we have an obligation to have our consciences formed by the ‘one true religion’, and the State a corresponding duty to support, defend this same religion. In the modern era, this ideal is a far way off, so in the meantime, we do what we can, jostling within a pluralistic society.

The least the State can do is offer freedom for the truth to be proclaimed, within and outside of churches. There is no compartmentalization between politics and morality, not least since every decision we make is ‘moral’, involving our conscience.

The myth of separation between Church, State, between morality and politics, is a heresy, not only because it is not true, but because it is impossible.

But until those deeper problems are fixed, thank you to Trump, for bringing us some of the way back to normalcy.