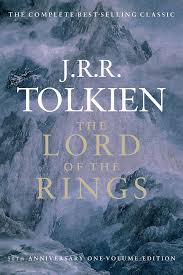 The death of Christopher Tolkien as a nonagenarian ends a legacy, for it was this youngest son of the great J.R.R. that took – pardonnez le pun – good care of his father’s inimitable work. And imitated it has been, many, many times over, all to paler effect. For unlike the fantasy genre to which the philologist unwittingly gave rise, Tolkien’s own work had that near-indefinable quality of resonance. That is, he did not just write a book, but created a world, the work of a lifetime, as the twelve-volume history of Middle Earth – which I did not know even existed until today – put together by his son Christopher, attests. The trilogy, along with the Hobbit and the Silmarillion, have a rich, textured quality, a realness to the characters, to their language, speech, history, culture. And the world is a much richer place for it.

The Lord of the Rings was very nearly not written. J.R.R. had penned The Hobbit, or There and Back Again, for children, with some vague idea of a longer story for adults. But he was bogged down, and discouraged, and it was C.S. Lewis of all people, Anglican and whose own Narnia series Tolkien thought too ‘obvious’, who urged the author to complete the story of Frodo, Sam, Gandalf, Strider, Gimli, Legolas and companions. We may wonder now what we would do without them, for almost seem more real than real people. Tolkien pulled off what seemed impossible: To write a deeply Catholic book that is in no way explicitly religious, and that even the most die-hard, supercilious, tree-hugging, agnostic can enjoy, in which they can immerse themselves and their children and, even without knowing it, becoming a little more Catholic themselves. For Tolkien loved the woods and the trees, the rivers and streams, the mountains and hills, not for what they were in themselves, but what they were to us; and perhaps others may learn some little of the same Christian hierarchy of goods.

Christopher never liked what Peter Jackson and Hollywood did with his father’s books, even though they likely raked his family nearly a Smaug-esque treasure trove. He said that Jackson turned them into ‘action films for 15 to 25 year olds’, which has more than a ring of truth – witness Legolas snowboarding on his shield, and Gimli the dwarf being ‘tossed’, amongst any number of other such kitsch. But how does one do justice, even in a six-hour film, to the full epic that is the Ring trilogy? Best to read, and use one’s imagination, far better and more satisfying than any movie.

Christopher was the youngest son of J.R.R. and his wife, Edith (Bratt). His eldest brother was a priest, and he has a surviving younger sister. We owe him a great deal of gratitude in keeping his father’s legacy alive and well, and offering so much to so many. Requiescat in pace, Christopher, and may you join your father and brothers in a true fantasy that never ends.