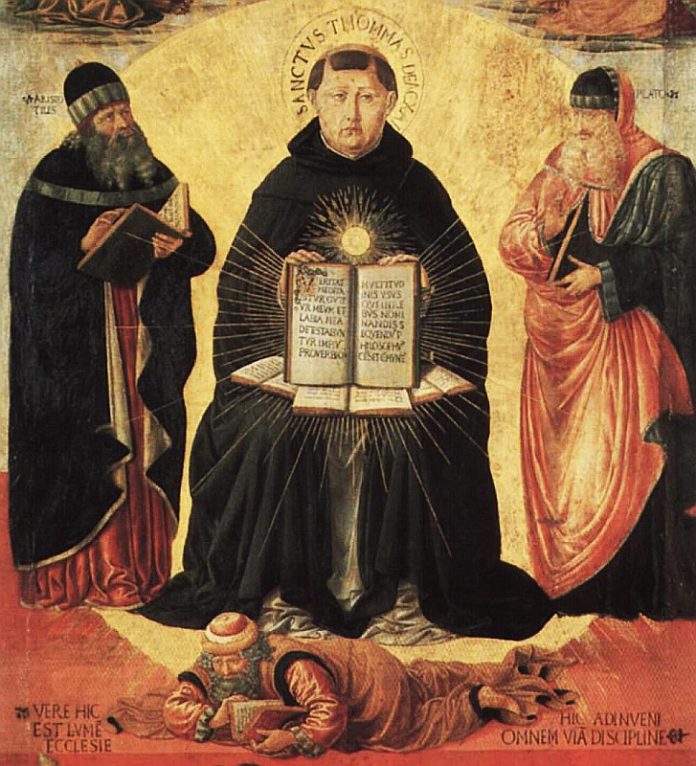 A blessed and grace-filled solemnity of Corpus Christi to one and all, at least to those readers outside of Canada, and other locales, where, for various pastoral reasons, this feast is moved to Sunday. But even so, we may anticipate.

Corpus Christi has a long and varied history dating back to the early Middle Ages, with the mystic, Saint Juliana of Liege (+1258), who, based on private revelations from God, advocated for a day celebrating the Holy Eucharist outside of Lent. For on Holy Thursday, we also commemorate the Eucharist, in its inauguration at the Last Supper, with the Triduum. But Our Lord desired His own day, to foster devotion to this Sacrament of Sacraments, the source and summit of the Christian life, as our faith has it.  A fruitful read is Pope John Paul II’s 1996 meditation on this feast on the 750th anniversary of its inauguration.

It is not as though the Church began ‘believing’ in the Eucharist in the 12th century, as any perusal of the early Fathers of the Church will evince, to say nothing of Saint Ignatius of Antioch’s letters describing Communion as the ‘flesh of God’ on his way to martyrdom (+117). Further back to the very beginning, John chapter 6 and Christ’s own Bread of Life discourse, wherein The Word Himself promises us His ‘flesh to eat, and blood to drink’.  We Catholics have always believed that Christ, the Word made Flesh, has left us his very ‘body, blood, soul and divinity’ present under the species, that is, the appearance or accidents, of simple bread and wine.

But it was Saint Thomas Aquinas who described with unsurpassed clarity the metaphysical reality of the ‘Real Presence’, that the Second Person of the Trinity, much as He presented Himself in human nature, now continues to ‘present’ Himself to us in the Eucharist.  There is the substance, the reality, of Christ, which we adore, and which we receive in Holy Communion. As the Church teaches, unlike regular food, which we turn into our substance, by consuming the Host, we are transformed into His divine Being.

Hence, the necessity of receiving the Eucharist, weekly, even daily if possible and as we are able.  As Christ taught us in His own prayer, ‘give us this day our daily bread’. The Greek for ‘daily’ is ‘epiousios‘, the ‘supersubstantial’ bread. As the Catechism puts it, this phrase “refers directly to the Bread of Life, the Body of Christ, the “medicine of immortality” without which we have no life within us‘. (CCC, 2837)

We may also add the unsurpassed value of worship and adoration of the Real Presence, which Saint Juliana and countless other saints, up to and including Pope John Paul, advocated most strongly. I sort of think of spending time before our Lord like divine ‘radiation’ that energizes and spiritualizes us, even just by being quiet before the unveiled presence of the Almighty. Recall Moses coming down from the mountain, his face shining so that he had to veil his face.

Thomas was more than a theologian. Just prior to the establishment of the universal Solemnity of Corpus Christi on the Thursday after Pentecost by Pope Urban IV in 1264, he deputed Thomas Aquinas to compose the hymnody for the divine office for the feast, and the theologian-philosopher demonstrated himself not only to be one of the greatest philosophers and theologians to have graced this good Earth, but also a mystic, a poet and a lyricist of divine inspiration.

The Dominican retreated to the cathedral at Orvieto, a mediaeval town that stands on top of a cliff, about an hour’s drive north of Rome, accessible by gondola, which I visited on a pilgrimage years ago.  Even more years ago, sometime between 1259 and 1264, it was in that same cathedral that Thomas composed the words to the ineffable Pange Lingua and the Verbum Supernum (the last two verses of each are the Tantum Ergo and the O Salutaris, respectively), along with other prayers and hymns still sung throughout the Church (although not nearly as often as they should).

As Pope Benedict XVI wrote in his meditation on the aforementioned Saint Juliana of Cornillon, on November 17, 2010:

Urban IV asked one of the greatest theologians of history, St Thomas Aquinas –who at that time was accompanying the pope and was in Orvieto – to compose the texts of the Liturgical Office for this great feast. They are masterpieces, still in use in the Church today, in which theology and poetry are fused. These texts pluck at the heartstrings in an expression of praise and gratitude to the Most Holy Sacrament, while the mind, penetrating the mystery with wonder, recognizes in the Eucharist the Living and Real Presence of Jesus, of his Sacrifice of love that reconciles us with the Father, and gives us salvation.

There are, of course, an untold other number of hymns, motets, prayers, litanies, all praising God present in the Holy Eucharist, by which we lift up our own minds and hearts, and solidify our faith in this most august of mysteries, unprovable by science, hidden from the eyes of this world, but all the more perfect a sign and sacrament for being so.

Sight, touch and taste are fallible in you, but is believed only by hearing alone; I believe whatever the Son of God has spoken; there is nothing more true than this word

That last line is in one version rendered as: ‘Truth Himself speaks truly, or there’s nothing true‘ which, although a little less faithful to the original Latin, rings true.  We believe, for, as said Saint Peter so truly, where else do we go, O Lord?

As Padre Pio (who just happened to be canonized on this day in 2002) declared, it would be easier for the world to survive without the sun than to do without Holy Mass. Or, rephrased, more easily without the Sun, than the Son.

O Sacrament Most Holy, O Sacrament Divine, all praise and adoration be every moment thine!