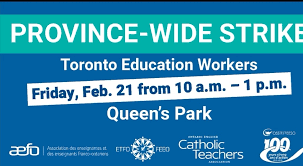 The public teachers of Ontario – including the Catholic Board, still holding that title, with not much to show for it, but more on that in a moment – staged a province-wide walk-out yesterday. I saw a number of them as I left Mass at the cathedral on Friday morning, the day of the ubiquitous and apparently mandatory, strike. They were all teachers, support workers, educational assistants, from ‘Cathedral School’ right across the road. Now that I think about it, none of them were in attendance at Mass, for it seems signaling – their placards shouting ‘Reverse the Tax Cuts!’ – takes precedence over sacrifice. If their cause is so heart-felt, even spiritual, why not start one’s daily with the daily Bread of Christ’s own Body and Blood?

But I digress, I suppose, for the whole system has lost its vision, its raison d’etre, in a more fundamental sense. As the quotation from Belloc yesterday made clear, an educational system that is totally under the control of the government – that is, socialist – is a disaster waiting to unfold. It may work for a time, but the State will have its way, for he who pays the bills calls the shots. And as the State becomes more ideological, more transgressive, more dictatorial, more anti-Christian – in a word, more evil – then so will all the ‘services’ the State has under its control, from health care, to education, to land ownership, or the lack thereof.

And the Church loses – in fact, gives away freely and meekly – her own God-given authority, which she is duty-bound before the same God to use in cause of freedom and truth.

Hence, we have the madness and hubris of a ‘Catholic’ teacher – a certain ironically named Paulo de Buono – reading children’s books advocating homosexuality to his students in class, such as ‘A Tale of Two Daddies’ and, of course, ‘A Tale of Two Mommies’. Of course, the books don’t say what the daddies and mommies in question get up to in the darkness of their bedrooms, which is really what defines ‘homosexuality’. Without that, they’re just two nice people of the same sex raising children – and so is it presented to children, as propaedeutic to what the ideologues really want them to learn to accept.

Concerned Catholics are calling for Cardinal Collins to ‘fire’ him, and part of me wouldn’t mind seeing that, but I’m not sure he has the practical authority to do so, for the Church, and Cardinal Collins, no longer control the Catholic schools in any real sense, which are owned, lock and stock, by the government, which means a small set of ideologues who have finagled themselves into positions of authority in acronymic bodies such as OECTA and other higher-up shadowy organizations, who control the money-flow, the hiring and the firing, the curriculum and all else.

His Eminence’s munus, as the chief shepherd of the souls in his diocese, is to provide for the spiritual welfare of his flock; to form consciences and ensure the sacraments are duly and beautifully provided. What he could do is speak loudly and clearly against this evil, and remove the name ‘Catholic’ from the publicly-funded system, for it has in reality ceased to be so. Then we can rebuild a private school system – which means freely constituted, run and controlled by the parents, alongside the Church, and to hades with whatever it is we have now.

There are good teachers, doing what they might, but they have to keep their heads down and their mouths shut; and if they do not, they are shunned, ridiculed, and, if they persist, demoted, moved or quietly let go. The du Buonos have the game in their control; they’re loud, and they’re proud.

It is at the point now that we should all consider our co-operation in the current public-Catholic system – which should be an oxymoron, and which, like Longfellows’ tragic recounting of the Wreck of the Hesperus, seems now beyond any real hope of redemption and reform. Not only are the curricula and many of the teachers perpetuating moral evils – the whole gay, transgender agenda, along with explicit sex education – but the feral nature of many of the students, carrying the scars of their broken families and their privation of parental formation, also corrupt those children who enter with better dispositions. As a consequence or corollary, after a decade and a half students under this tutelage, the students come out with a sub-par intellectual formation as well, and that’s just from a math and science perspective, to say nothing of truths of the Faith, of which they seem almost completely and unblissfully ignorant. As I’ve written before, there is a reason by almost none of the ‘elites’ – the rich and well-placed – send their children to public schools of any sort.

Yet there are the teachers, pounding the pavement, with their paper placards and protests, expecting us drivers-by to honk our horns in solidarity. It seems inconceivable that they are demanding more for an already lavishly funded system; most of their salaries sit well over $100,000, plus benefits, generous holidays, sick days, early retirement and so on. All for doing what Sisters and single women – and now the underfunded private schools – used to do for the love of God and their students.

Let them have the lucre. Those with eyes to see will perceive the truth, and follow the hard and narrow way to find it – homeschool, private school, un-school. Such is the way of the same God, Who is found amongst the poor in spirit and humble of heart, who pound not the streets, but their hearts in repentance, and in prayer for the grace to do the good God wills.