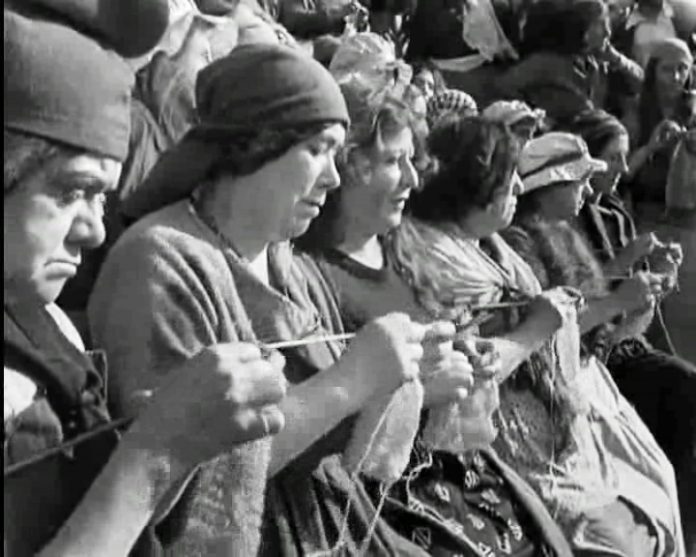 (On this anniversary of the beginning of the French Revolution, July 14, 2020, I thought this article from our archives from the fiery pen of Paula Adamick from a couple of years ago would be a propos. What is old is new again)

When Charles Dickens created his bloodthirsty character, Madame Defarge, for his classic novel A Tale of Two Cities, he was basing her on a real phenomenon of the French Revolution. The Tricoteuse. The knitting ladies.

These were the female revolutionaries who sat beside the guillotine in Paris during the Reign of Terror, continuing to knit between public executions. And among the items they knitted were the famous liberty caps or Phrygian caps, now reminiscent of the pink knitted caps sported today by members of #MeToo. Of which, more later.

One of the earliest outbreaks of their revolutionary insurrection was the Women’s March on Versailles held on October 5, 1789, over high food prices and chronic shortages. Numbering in the thousands, this crowd of angry women immediately commanded a unique respect: their demands for bread were met and King Louis XVI was pressured to leave his magnificent palace and return to Paris to govern “from the national home”, thus conferring on these once obscure women a near mythic status.

And so it was that, although lacking central leadership, this group of revolutionary women became highly celebrated.

Eventually, however, their increasingly riotous behaviour became a liability for the new authoritarian revolutionary government. So much so that when the Reign of Terror began in 1793, these dangerously unpredictable women were made unwelcome and barred from their usual seats in the spectator galleries of the National Convention. And soon after, they were officially banned from any form of political assembly whatsoever.

Among the veterans of the first march was the fictional Madame Defarge who, along with her co-revolutionaries, gathered thereafter at the guillotine in the Place de la Révolution (now Place de la Concorde), as witnesses to the daily public executions of aristocrats and other undesirables. Which is also when she and other market-women became the tricoteuses who would take their seats daily to watch the guillotine while they knitted.

To say Defarge “had personal issues” is an understatement. As Dickens conceived Madame Thérèse Defarge, she is the wife of wine merchant Ernest Defarge, a tireless worker for the Revolution and a tricoteuse. 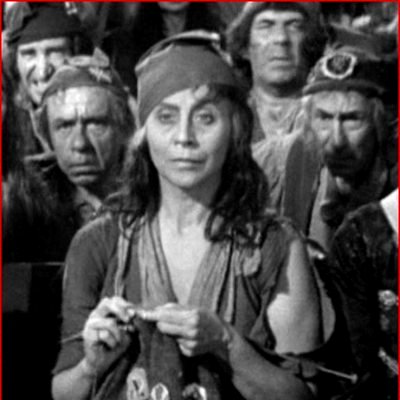 She is also one of the novel’s central villains. Obsessed with revenge against the artistocratic Evremondes who she blames for the deaths of several members of her family, Madame Defarge ruthlessly pursues Evremonde descendant Charles Darney, his wife, Lucie Manette, and their child, refusing to believe that Darnay has rejected the Evremonde family cruelty and intends to renounce his land titles and give them to the peasants who worked on them. In the end, however, Defarge’s all-consuming appetite for revenge against even the innocent Darnay and his wife dooms her at the hand of Lucie’s guardian, Miss Pross.

But until that final moment, Defarge exults in her hatred and knits feverishly, her flying fingers secretly encoding within her woollen hats the names of those about to be beheaded. Thus, she symbolizes the nature of the Reign of Terror itself, loudly cheering on the radical Jacobins as they engage in mass political persecution of all the real and imagined enemies of the Revolution – particularly aristocrats and religious – by beheading them on charges of sedition to the new republic.

As for the nature of revolution itself, no one ever defined it more accurately than Madame Defarge: “When it is ready, it takes place, and grinds to pieces everything before it. In the meantime, it is always preparing, though it is not seen or heard.”

Nor is there any stopping revolution once it begins, she adds. Once the phenomenon is unleashed, it destroys everything in its path: “Tell Wind and Fire where to stop…but don’t tell me.”

Chilling words indeed. But anyone who has studied revolution – and there have been many to study since the French Revolution changed the world irrevocably – understands well the truth of her words. These students understand that Revolution is never accidental or spontaneous. Revolution is always fomented.

A New Reign of Terror

Fast forward to 2018. Well, 2006 actually, when the #MeToo movement was founded by black activist Tarana Burke. Burke told Ebony magazine that she initially launched “#MeToo” as a grassroots movement to provide “empowerment through empathy” to survivors of sexual abuse, assault, exploitation, and harassment in underprivileged communities who typically don’t have access to rape crisis centers or counselors.

Since initially launching the #MeToo movement, she has also founded an online support network that aims to support and amplify the voices of survivors of sexual abuse, assault, and exploitation. But little did she realize her hashtag would one day ignite on the world stage. And that it would do so by exploiting some current politically correct nostrums. Which is that women do not lie about such matters and therefore must always be believed; nor can they be culpable in sexualized situations. 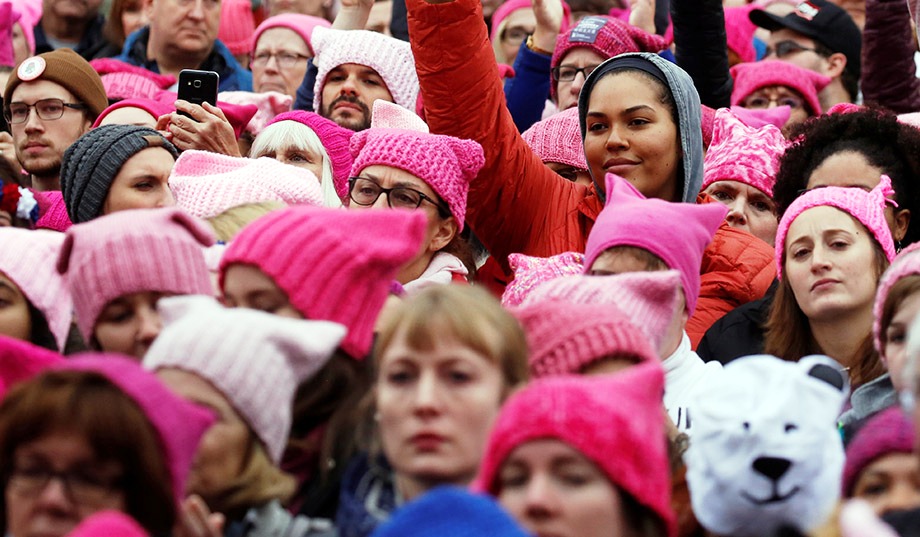 The triggering moment came on January 21, 2017. It came as The Women`s March on Washington, which drew anywhere from 500,000 to 1 million women, most wearing the now famous “pussy hats”, knitted with pink wool. The declared goal of the march was to advocate legislation and policies on women`s rights, reproductive rights, LGBTQ rights, racial equality, freedom of religion and workers` rights.

The march, which was said to have simultaneously occurred in 48 other cities across the U.S. was in protest against Donald Trump, just one day after his inauguration as president of the United States, largely due, it was said, to statements he had made and positions many regarded either as “anti-women” or otherwise offensive.

Reminiscent of the first women’s march at Versailles in 1789, this was the largest single-day protest in American history. Plus, it was headlined by a menagerie of pro-Hillary Clinton feminist celebrities from Madonna to Ashley Judd, all quick to the microphone to announce to thundering cheers how much they love being ‘nasty’ women. Oh, and to denounce the new president and his neanderthal pro-life policies.

The media loved it, of course. But the media also failed to note the birth of another phenomenon which was also triggered on that day. It seems that via #MeToo, a host of accusations against famous and powerful men began to take a toll. And heads began to roll. Beginning with naming Hollywood producer Harvey Weinstein as a sex abuser.

As the first up to be targeted for sexual crimes and character assassination, Weinstein’s career was instantly destroyed, his whole life condemned to infamy. The destruction of the famed producer was followed soon after by a parade of other famous ‘perps’ who included Charlie Rose, Kevin Spacey, Mark Halperin, Oliver Stone, Val Kilmer, Elie Wiesel, Ben Affleck, Kevin Spacey, Dustin Hoffman, Jeremy Piven, Matt Lauer, Garrison Keillor, Morgan Freeman, Les Moonves, Gerard Depardieu and many others.

No trials, just accusations – which may or may not be true – followed by the wholesale ruination of their reputations, careers and lives.

And now these women are crowing for the head of Brett Kavanaugh. With the usual accusations, all aimed at ensuring he never attains a seat on the Supreme Court bench, despite the fact that the latest FBI investigation exonerates him while the claims of his primary accuser, Dr.Christine Blasey-Ford, remain uncorroborated.

Kavanaugh’s crime? He’s a Catholic with a consistent conservative record as a federal judge, making him a potential threat – in their minds at least – to one day overturning Roe v Wade, the 1973 decision, based on a lie, that legalized abortion.

“Women! We can kill as well as the men when the place is taken,” Madame Defarge tells her husband proudly, while describing the rising viciousness of the women of France. “And with a shrill thirsty cry, trooping women are variously armed, but all armed alike in revenge and hunger.”

Even before the 2016 presidential election, but especially since then, leftists and feminists have demonstrated over and over again that, like all committed totalitarians, they operate from a seethingly violent mob mentality. Progressives also continue to take a special delight in displaying their political opponents triumphantly to the crowd before trying to destroy them.

Again, this pattern dates as far back as the French Revolution which, led by the anti-Catholic Jacobins, unleashed a rabid bloodlust that resulted in the beheading by guillotine of thousands of men, women and children.

And today, groups such as #MeToo and all its sisters are mere parts of the machinery fomenting it, shaking the bed of state and the bed of the existing moral order until it collapses. These groups are collectivist, totalitarian, terroristic, pathologically cruel, and often mendacious because they are also believers in the notion that the end justifies the means, any means. And they are all unofficially partnered in a mission to destroy the traditional family and Western civilization based on Judeo-Christian law and mores.

The Kavanaugh circus is not just about sexual harassment and its permutations. This is not merely about #MeToo. This is a revolutionary anti-patriarchy movement which declares Time’s Up on 10,000 years of recorded history. And yes, this is coming. And yes, this is real.

But here’s a caveat for those who will listen.

Once this mission is accomplished, progressives had better understand that they too will find themselves under the knife, the place where revolutionaries ironically and eventually find themselves.

For now, however, they are indulging their bloodthirsty fantasy – one Madame Defarge would have supported. That is, holding a blade to the throat of Donald Trump whose main crime is being pro-life and anti-collectivist left.