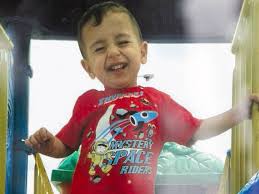 The lifeless body of the 2 year old Aylan Kurdi lying face down on a beach has caused outrage around the world (I have shown him here alive and laughing, as he may well be in heaven as I write).  Little Aylan was drowned with his brother and their mother as they tried to make their way across the Mediterranean from Syria to Greece in an overcrowded boat.  In a tragic irony, the mother initially hesitated to clamber aboard, as she ‘feared the water’.

Europe is in the midst of what is called a mass-migration problem, but more properly a refugee crisis.  A migrant is searching of a better life; a refugee is running for his life.

Migration has been a fact of human history at least since Adam and Eve were exiled from the garden of Eden, and Cain banished to the land of Nod.  ‘Exile’ is a type of forced migration, but every migrant is motivated by some level of coercion, and every wanderer who must leave the land of his birth and childhood feels a certain sadness.  Pope John Paul II discussed emigration in his encyclical Laborem Exercens (On the Dignity of Human Labour) describes it as a ‘necessary evil’, and the paragraph deserves to be quoted in full:

Finally, we must say at least a few words on the subject of emigration in search of work. This is an age-old phenomenon which nevertheless continues to be repeated and is still today very widespread as a result of the complexities of modern life. Man has the right to leave his native land for various motives-and also the right to return-in order to seek better conditions of life in another country. This fact is certainly not without difficulties of various kinds. Above all it generally constitutes a loss for the country which is left behind. It is the departure of a person who is also a member of a great community united by history, tradition and culture; and that person must begin life in the midst of another society united by a different culture and very often by a different language. In this case, it is the loss of a subject of work, whose efforts of mind and body could contribute to the common good of his own country, but these efforts, this contribution, are instead offered to another society which in a sense has less right to them than the person’s country of origin.

Since I read them years ago, I have been struck by these words of the Holy Father, especially as an emigrant myself.  Of course, I had no say in the matter, being five and a half, but I ponder, should I at a later age have returned to Scotland?

But the Holy Father goes on:

Nevertheless, even if emigration is in some aspects an evil, in certain circumstances it is, as the phrase goes, a necessary evil. Everything should be done-and certainly much is being done to this end-to prevent this material evil from causing greater moral harm; indeed every possible effort should be made to ensure that it may bring benefit to the emigrant’s personal, family and social life, both for the country to which he goes and the country which he leaves. In this area much depends on just legislation, in particular with regard to the rights of workers. It is obvious that the question of just legislation enters into the context of the present considerations, especially from the point of view of these rights.

Much good can come of the ‘evil’ of migration, as we have seen in the many benefits the Irish, Scotch, Italian, Polish and other cultures brought to our own shores.  The Church has always taught that we, both at the level of government and as private citizens, do what we can to welcome migrants, especially those who are refugees, to mitigate the ‘evil’ of emigration.  The Holy Father does not imply a moral evil here, just a privation of a good that should be there, namely, the conditions which would allow someone to stay in the land of their birth.  Sometimes, there is moral as well as physical evil underlying emigration, as we see who are fleeing the horrific conditions in Syria.

Yet as much as more stable countries have an obligation towards the migrants, there is also a reciprocal obligation on the migrants themselves, who must do what they can to adapt and contribute to the country which takes them in.  As the old adage goes, attributed to the fourth century bishop Saint Ambrose, si fueris Romae, Romano vivito more; when in Rome, live as the Romans do.

As I have written before, culture and custom, which follows directly from one’s religion (and everyone has some sort of ‘religion’), trumps just about everything else.  A country also has a right and duty to protects its borders and its culture, to ensure that the ‘customs’ of immigrants (i.e., their religion) will not precipitate a gradual (or even sudden) breakdown in their own society, that each individual migrant will not cause more evil than good.  Previous tides of emigration have all, by and large, been between Christian nations.  Now, as we have hundreds of thousands of non-Christian, primarily Muslim, emigrants, we must ask some pointed questions:  How many jihadi ISIS-sympathizing terrorists are in the midst of that mass of people moving north?  To what extent do even ‘tolerant’ Muslims refuse to tolerate the Christian principles of the West (at least, inasmuch as we still have Christian principles)?  As Mark Steyn argues, multiculturalism is a failed, in fact an impossible, proposition.  A country without a culture, and a border to protect that culture, is simply a geographical conglomeration of people.  But you need people to propagate your culture.  As Europe enters its demographic death spiral, why would not the poverty-stricken millions in Africa and Middle East see it as nice place to set up?

These are particularly pertinent questions when it comes to Islam, the pathological forms of which can be tolerated in no country, as we see in the breakdown in the Middle East.  In fact, I would go so far as to say that Islam (or any other religion) can only build a sustainable culture and society insofar as it has adopted, or at least paralleled, the social doctrines of Christianity, and specifically Catholicism.  Only the Catholic Church has the fullness of revelation, which means that only the Church offers a clear and untainted view of the natural law, and the principles of a just society. One need only look to see that every country to which the refugees are fleeing is Christian, at least historically, and their laws and constitutions still to some extent maintain the Christian foundation on which they were built (for example, they do not stone adulterers, or chop off the hands of thieves, or inflict capital punishment for ‘blasphemy’, and, most attractively to many of the refugees, they have a generous welfare system, based on the dignity of the individual person).  In fact, an article today in the National Post declared that the six wealthiest Muslim countries near Syria have taken in no refugees.  I wonder why?  Could it have something to do with the ‘culture’ of Islam?

Hilaire Belloc argued that in its origins Islam was a Christian heresy, and indeed many of its beliefs and practices follow the eastern Catholic milieu in which it was born:  Prayer seven times a day, fasting, prayer, almsgiving, pilgrimages, prophecy, mediators, family life, and devotion to one God.

Of course, to understate the case, Islam is not a perfect religion, and, like any other belief system that does not hold to the ‘fullness of truth’, contains the seeds of deep deviancy, as we see in ISIS.  One could argue that, due to its highly devotional, even fanatical, nature, Islam has the potential either for a lot of good (if it continues to follow, even unknowingly, its quasi-Christian principles), or for a lot of evil, if it deliberately abandons, and even tries to destroy, anything remotely Christian, or even not Muslim enough, as we see in Syria.  Then it truly becomes a religion of ‘anti-Christ’.

I will not argue here for the ‘true face’ of Islam, for that, to put it mildly, is a very controverted question, perhaps even unanswerable.  Historically, as I argued in a previous post, there are a number of similarities between ISIS and early Islam, but there were and are also tolerant varieties of Islam. But even here, how much do they themselves tolerate fanaticism?  (Indeed, now that I ask the question, how much do we all ‘tolerate fanaticism’ and grave evil of one sort or another, as our own societies abandon their Christian foundation?)

Eventually, tolerance has limits, and ISIS has a very low level of tolerance.  Hence, we have the refugees, many of whom, we may presume, see no place for themselves in ISIS, and are therefore threatened with slavery or death.  But these same refugees must be willing to see the evil aspects of the religion to which they adhere, and reject them, clinging only to what is true, good and beautiful, willing also, in gratitude, to adapt to some degree to what is good in the Christian countries that welcome them.