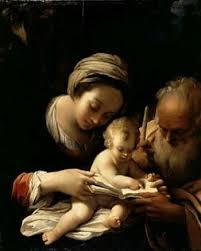 It has always been difficult for the homilist to preach on the feast of the Holy Family. In the old days, the priest would deliver a string of platitudes about loving mothers, provident fathers and so on. There’s a joke people used to tell about such sermons. After Mass Mrs. Smith said to Mrs. Jones, “I wish I knew as little about marriage as he does.” It’s still difficult to preach on the feast, but for a totally different reason; for how in heaven’s name do you define a family today? There are single-parent families or families with two male, or two female parents. Polygamy—one man with several or even multiple wives—is practised in Canada, and not only by the Mormons in Bountiful B.C. A woman told me that one of her co-workers announced that she was going to be married “in the Moslem way.” When asked what that meant, she replied that she would be the second wife of her husband, not legally, of course, but in accord with the Koran that allows a man to have up to four wives. And then there’s polyandry, a word that you may not know. It refers to one woman with several husbands, in what I might call “the Canadian way,” that is, with only one being legal. The Globe and Mail had a laudatory article on one such “family” a couple of weeks ago, with a photograph of the woman, her two partners and their smiling offspring. Besides these, there are other arrangements that I would not dare to describe or even mention for the pulpit. Concomitant with these developments is the growing intolerance for the terms “husband” and “wife”—now simply “partners,”—for “mother” and “father”—now “parents”—and for “son” and “daughter”—now “offspring” or “sibling.”

What in the world is the poor preacher to say on the feast of the Holy Family? . . . now that we have been educated to be so tolerant that we can no longer tolerate anyone who would question the legitimacy of these new arrangements. It’s not only a difficulty for the preacher, for you like me are members of a Church that views Tradition as valid a vehicle of revelation as Scripture itself. Simply call to mind the language of the creed that we shall shortly recite: we believe in God the Father and God the Son. Are we now to abandon those hallowed titles and in baptizing, instead of using the time-honoured phrase “in the name of the Father and of the Son and of the Holy Spirit” say something like this: “I baptize you in the name of the Source, the Effect and the Union”? Furthermore, in the Bible Jesus is described as the bridegroom of his bride, the Church. Mary, too, we address with the title “Mother of God” and also as our mother. And so on. I fear that if I were merely to enunciate our traditional teaching about marriage some of you would walk out and the rest would bombard me with their hymnals. And it is shocking to modern Canadian ears as you find it in, e.g., the Catechism. Its starting point is what Saint Augustine identified as “the three goods of marriage.”[1] The first is “fidelity,” which points to the mutual love and support of one spouse for the other. Then, “children,” referring to the obligation to provide, and provide for, the next generation. And finally, he speaks of the “sacrament,” i.e., the permanence of Christian marriage in that it is a sacramental sign of Christ’s love for the Church. As he will not abandon his bride, the Church, nor she him, so husband and wife are permanently joined until death separates them.

The most offensive statement in this traditional description of marriage is: “the primary purpose of marriage is the procreation of children.” A word of caution may be in order before your indignation becomes violent. The word “primary” here is used in the sense that we find it in, e.g., primary school—i.e., the foundation upon which higher learning will be built. Thus, learning one’s ABCs is not superior to reading Shakespeare, but is an essential first step. For if you cannot read the great works of literature will remain for you literally a closed book. So too with procreation. It is the biological fact upon which can be raised the edifice of mutual support, a loving relationship and a mature spirituality.

The implications of Saint Augustine’s approach to marriage are wide-ranging, in that the noble titles of husband and wife, mother and father, are paradigmatic for all of society, including those of us who are unmarried. For each one of us, whatever his condition, is called upon to imitate the generous and self-sacrificing service that marriage requires from the spouses in their relationship to one another and to their children. In general, then, we can say that all the machinery of the modern state—industry, government, education, entertainment—is in place to serve the family, that is, to encourage, to facilitate the union of man and woman in the establishment of a home. Teachers, for example, act to supplement the education of the young that begins and continues in the home. Commerce, too, exists primarily to provide household goods that it would be too difficult or too time consuming for a family to make on its own. Similarly, government should act to safeguard the public good in passing laws and providing assistance to preserve the well-being of all its members, especially in such things as affordable housing and family assistance.

In short, family life, at best, reminds us that the essential purpose of the paraphernalia of society is service rather than profit or self-aggrandizement. You can see, I am sure, that this traditional doctrine constitutes a radical critique of Canada today. But what is one to do? I may not be able directly to alter what is going on in city hall or Queen’s Park or Ottawa; I may not be able to monitor the media; I may not be able to influence the stock market; but I can reflect on my own situation and act so as to conform my behaviour to what is required of a faithful follower of the Gospel of Jesus Christ