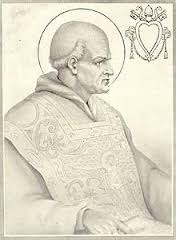 Pope Saint John I (470-526) was a native of Tuscany, a Deacon for years, helping govern the Church in her temporal affairs and distribution of aid – he may have been the ‘Deacon John’ to whom the great philosopher Boethius dedicated his five religious tractates. Like the future Pope, Boethius was also to suffer martyrdom at the behest of his own king.

John was already old and frail when chosen as Pope in 523, but was the first Pope – that is, the Bishop of Rome, who is always Pope, and vice versa – to visit distant Constantinople, the great Eastern founded by Constantine in the early 4th century – on an ambassadorial mission to Emperor Justin on behalf of the Arian King Theodoric, now ruler of the Western empire. Yes, the ‘West’ had fallen upon hard times, ruled now by a ‘king’ imbued with the pernicious heresy of Arius, that Christ was, and is, not God.

The purpose of the mission was to mitigate Justin’s decrees against the Arians, for the heresy, even though condemned by two ecumenical councils, still lingered, particularly amongst Germanic barbarian converts like Theodoric, who made the religion official policy. This stuck in the craw of the eastern Emperor, who saw himself as the arbiter of questions dogmatic, and wanted greater unity, but who had his own Christological issues.

Pope John made the arduous journey of over 1300 miles with a large and venerable retinue, and was received warmly by the Emperor.  By any unbiased account, the Holy Father accomplished his mission, but, upon his return, was accused by Theodoric of conspiring with the emperor (relations between East and West were already fraying), put into a dank prison at Ravenna, a stronghold of Byzantine power on the north-eastern coast of Italy, where good Pope John, already old and frail, died of neglect and ill-treatment on this day in the year of Our Lord 526.

Providentially, another Pope who took half of his name, the great John Paul II, was born on this day in 1920.  In Poland, and other European cultures, they do not celebrate their birthdays so much as the days of their patron saints (which for Karol Wojtyla was November 4th, his namesake, Saint Charles Borromeo).  But I am sure that Pope John was in some ways guiding the life of the young Karol, knowing he was destined to take on the mantle of the papacy, and travel, pray and suffer, as his eponymous predecessor had done, for the Church universal.  Curiously, John Paul II’s would-be assassin was from Turkey, where is found Constantinople, now named Istanbul.

It is only in the breadth of eternity that we can truly discern the events not only of this world, but in each of our individual lives.  What in  the rather limited scale of secularity appears as ‘failure’ may in fact be our greatest success, which is why we honour martyrs like Pope John. Both Pontiffs, like so many others with whom we have been blessed, displayed heroic equanimity in persecution, misunderstanding, even in face of apparent futility, sickness and death, which is likely their greatest triumph.