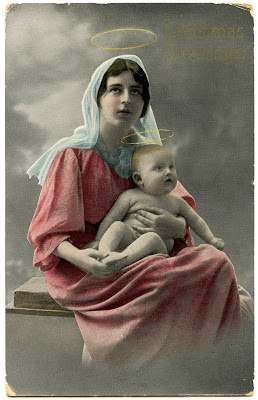 There’s been quite a bit of media coverage lately about kiddies at Mass. One parish’s idea had made the Facebook rounds a while back: the pastor had put an insert into every pew asking parishioners to be patient and loving towards kids, instead of disdainful and angry. Terri wrote a beautiful post on it the other day, and the mommy-bloggers have been sharing their tricks and triumphs when it comes to keeping their kids under wraps for one hour a week.

And even though I love kids it was hard to keep focused—to pay attention to the priest. It was difficult not to watch the kidlets journey from side to side. It was also tough not to have the “control-your-kids” thoughts or the thoughts about how I would do an infinitely better job keeping them quiet.

Then came the guilt. Perhaps, I thought, I’m becoming one of those people: the fuddy-duddy old cranks so set in their ways that any deviation from “the normal routine” is loathed for all eternity. (If this happens to be the case, talk amongst yourselves whilst I go and weep and wail for my eternal soul.) Why is it that I think I would do so much better than the parents? Why do I think I have the market cornered on controlling children? I can barely control my own self.

And it occurred to me that these kids, while they were active and made noises, weren’t all that noisy. In fact, the more I thought about it, the more I realized that chattering, squirming kids are no less distracting than the deaf old ladies who can’t hear themselves whisper-screaming their prayers, or the teenagers sucking their teeth, or the old guy burping or hacking up phlegm every 5 minutes. Asthmatic wheezers are, in fact, everywhere around us, as are the people with nervous tics, clicking their teeth together or readjusting their clothing every 10 seconds—and they’re every bit as distracting as any child can be. Lets be honest here. Humans are noise-making machines whether we want to admit it or not. It’s really hard for the best of us to sit perfectly still and pay perfect attention for a full hour. Kids are definitely humans. Why is it surprising that they don’t sit still when we adults can’t even do it?

Furthermore, unless you’re a brand new convert, it’s fair to assume that you know the Mass—that you’ve been to Mass a few times. I’d say generally speaking most people know what’s going to happen and when, and they know the words of the Mass backwards, forwards, upside down and right side up. So hearing every single word isn’t absolutely necessary to “getting something out of it.” Aside from the readings, the Gospel, the homily, and a few announcements here and there, nothing will be said that you haven’t heard a hundred times before. While silence during Mass is certainly helpful and may be a touch more conducive to personal prayer than not-silence, it is not necessary for Mass to take place, nor is it needed for us to take part in the Mass. The Lord will come regardless of the sounds in the church, and we will still know when to say “And with your spirit.”

And because most parishes that are full of life and love and faith are usually bursting at the seams with children, I can only conclude that this is because Jesus loves kids. Like, LOVES them. He has made them, after all, and he continues to make them. And God must know what he’s doing when he creates little people, mustn’t he? He must understand that they are inquisitive and tactile. He must appreciate that they have a tremendous and overwhelming compulsion to be seen and heard—so they’re constantly laughing, singing, crying, talking and/or gurgling. Honestly if the “kingdom of God belongs to such as these,” I can’t imagine heaven is ever silent, but is a rather boisterous uproar of joyful chaos. Why should the Mass, where heaven becomes present on earth, be any different?

I have 17 nieces and nephews (with 2 more on the way) most of them being 6 and under. Mass times, when the family is together, is a flurry of baby-passing, drawing, hand-shaking, laughing, and shushing with a bit of the Lord mixed in between. Once when my niece was small she went and sung with the choir. She walked right up to the front of the loft and belted out her alleluia’s at the top of her lungs and only slightly off key. She sang her little heart out and it was so adorable she left the whole congregation, including the pastor, giggling and complimenting her. My nephew is a singer too—he just hasn’t figured out that you sing WITH the congregation, not after they stop. One time my nephew Jack went and extended his hand in peace to a teenager sitting at Mass by himself with his “cool” exterior and his ball cap by his side. It happened to be during the homily and not the kiss of peace, but it was the first time I’d seen that teenager crack anything remotely like a smile.

See, Jack may not necessarily know how to pray like we adults do. Like most kids his age his communion with the Lord wouldn’t look anything like ours might. Rather it’s Jack’s presence that is his prayer because he has nothing else to give. Little ones praise the Lord by their very beings simply because they exist—and when their beings are in the presence of the Almighty, they must be doubly pleasing to Him. Sure there are distractions and commotions. There are emergency bathroom visits and “blow-outs,” squirming, whining, and wrapper-crinkling. But when that child is at Mass, whether he is quiet or not, he speaks a prayer that God must cherish—a prayer I imagine God holds very close to his heart.

So carry on with the Lord’s work, my parent-friends. Carry on. You are doing a fine job in bringing your little ones to God. Bring them as often as possible. I say, do what you can to help them enter into that hour (or half hour) of stillness and silence, and then leave the rest up to God. They are, in fact, his children anyways.