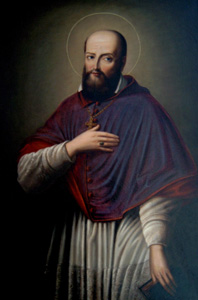 It would be ironic if on this feast of the patron saint of writers, as well as this week dedicated to Christian unity, we did not write a few words on Francis de Sales, who expressed, at the height of the divisions and schisms caused by the Protestant ‘reformation’, the right way to do ecumenism:  With a gentle and charitable soul, firmly grounded in the truth and holiness, Francis’ sermons were mesmerizing, and, as bishop of Geneva, he won many, many souls back from the erroneous paths of dour and doom-ish Calvinism. Since his preaching and evangelization of the Catholic Faith was illegal, he would slip his scintillating and irrefutable pamphlets under doorways, and seek refuge in the forest at night, sleeping outdoors in harsh conditions.

His joyful demeanour, and his obvious love of the faith drew many. In the first two years of his priesthood, working in these very difficult conditions amongst staunch Protestants, he converted tens of thousands. As he wrote, you attract far more flies with honey than vinegar. Yet, at one point in his own life, he fell into such a despair of his own salvation that it was all he could do to hold on by sheer grit; he pinned the Creed close to his heart, hoping he would not lose his faith.

His confidence returned upon a pilgrimage to the church of Saint-Étienne-des-Grès in Paris, where with great difficulty he prayed the Memorare before an image of Our Lady. The grace was given him that God desired only his good, and that salvation was offered to those who followed His will. Francis made a vow of chastity, and eventually made his way to seminary, excelling in his studies, and was ordained in 1593. A scant six year later, in 1599, he was consecrated co-adjutor bishop of the Calvinist stronghold of Geneva, which seemed an impossible appointment.

Yet, Bishop Francis’ holiness, cheerfulness, imperturbability, and obvious deep charity converted nearly the entire region, so much so that his life was often in danger from those more resistant Calvinists. He truly was the Apostle of Geneva.

Francis was a confessor and adviser to kings and potentates, to the rich and poor, founder and inspiration of religious orders (the Salesians and the Daughters of Charity owe their existence to his influence), as well as a father and patron to an untold number. King Henry IV of France, himself a wavering former Huguenot, not known for his virtue and morals, loved to hear the good Bishop, seeking his company often, declaring: A rare bird, this Monsieur de Genève, he is devout and also learned; and not only devout and learned but at the same time a gentleman. A very rare combination.

Bishop de Sales went to his eternal reward in 1622, three days after Christmas, at the age of 55 (too young, one might think, keeping in mind that the future bishop Karol Wojtyla would not even be chosen as Pope until his 58th year). He was declared one of only 36 doctors of the Church, by Pius IX in 1877.

Francis was also ahead of his time in exhorting holiness in laypeople, as well as priests and religious. Devotion is nothing else than the striving for perfection of the will, by union with the will of God, in doing one’s duty as well as one can, on whatever path one is called. Excellence, virtue and magnanimity should be the hallmark of every Catholic.

As the great bishop wrote in his Introduction to the Devout Life:

The bee collects honey from flowers in such a way as to do the least damage or destruction to them, and he leaves them whole, undamaged and fresh, just as he found them. True devotion does still better. Not only does it not injure any sort of calling or occupation, it even embellishes and enhances it.

Moreover, just as every sort of gem, cast in honey, becomes brighter and more sparkling, each according to its colour, so each person becomes more acceptable and fitting in his own vocation when he sets his vocation in the context of devotion. Through devotion your family cares become more peaceful, mutual love between husband and wife becomes more sincere, the service we owe to the prince becomes more faithful, and our work, no matter what it is, becomes more pleasant and agreeable.

It is therefore an error and even a heresy to wish to exclude the exercise of devotion from military divisions, from the artisans’ shops, from the courts of princes, from family households. I acknowledge, my dear Philothea, that the type of devotion which is purely contemplative, monastic and religious can certainly not be exercised in these sorts of stations and occupations, but besides this threefold type of devotion, there are many others fit for perfecting those who live in a secular state.

Therefore, in whatever situations we happen to be, we can and we must aspire to the life of perfection.