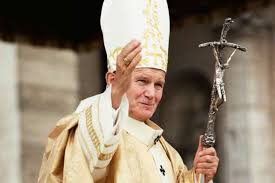 Before we leave the great French-Canadian missionary Saint Marie of the Incarnation in the liturgical rear-view mirror, a word on the consecrated life as better and more ‘objectively perfect’ path to heaven, a truth that, to my own anecdotal evidence, has been rather muted of late in the Church.

In the recent memorial of Saint Catherine of Siena, who determined from a young age to dedicated her whole life to Christ, we read as part of the first lecture these words from the seventh chapter of Saint Paul’s first letter to the Corinthians:

I say this for your own benefit, not to lay any restraint upon you, but to promote good order and to secure your undivided devotion to the Lord

Saint Paul is insistent that it is better to remain unmarried, not for any Manichean motives that ‘sex is bad’, nor to give ourselves to an untrammelled hedonism as a carefree bachelor – or bachelorette –  but so that we may more ‘anxious for the affairs of the Lord’. Married men and women are, by definition, concerned with the needs of their spouses and children, which are not always the most conducive to spiritual perfection, although hopefully not inimical thereto.

Saint Thomas Aquinas continues this teaching, (cf., II-II, q. 186, a. 2) claiming that the ‘vehement delectation’ – the very intense pleasures that arise from commingling bodies – leads to a focus on this life, to its own needs and pleasures, with a concomitant attachment thereto. Add to this, what he calls the solicitude for all the things that pertain to the married state, such as, to make but a short modern list, mortgages, minivans and the mayhem of running a household.

The Council of Trent – which yesterday’s saint, Pope Pius V, a learned Dominican (who seems to have begun the papal custom of wearing white, as he kept his habit upon being chosen), brought by his own forceful personality and discipline to a successful completion – clearly teaches the ‘objective superiority’ of the religious and consecrated life, a teaching re-affirmed by the Second Vatican Council, and again by the great Pope of the Council, John Paul II in his 1996 encyclical Vita Consecrata:

As a way of showing forth the Church’s holiness, it is to be recognized that the consecrated life, which mirrors Christ’s own way of life, has an objective superiority. Precisely for this reason, it is an especially rich manifestation of Gospel values and a more complete expression of the Church’s purpose, which is the sanctification of humanity. The consecrated life proclaims and in a certain way anticipates the future age, when the fullness of the Kingdom of heaven, already present in its first fruits and in mystery, will be achieved, and when the children of the resurrection will take neither wife nor husband, but will be like the angels of God (cf. Mt 22:30).

Now, this does not mean that monks, nuns, priests, bishops or consecrated laypeople are individually necessarily any holier than those who are married – as recent evidence has sadly borne out – but rather that the consecrated life provides a more direct path to holiness and heaven; anticipates our life there, as an eschatological sign, where we will be ‘as the angels’ who neither marry nor are given in marriage; provides much freedom for many inclusive – as opposed to one exclusive – friendships; and, finally, consecrated life is an invaluable prompt to apostolic work, freeing one to devote one’s whole energies to whatever ‘work’ one is called. There is a reason why most of the schools and hospitals and works of charity across this fair land were founded, and were until recently still largely staffed, by religious orders.

Pope John Paul II would not have been who he was if he had chosen the path of a married professor in Krakow; he could still have been a great man, even a saint, but he would not have the same ‘objective perfection’, nor the apostolic fruitfulness, of the man we know, who ‘sold all he had’ and ‘followed Christ’. There are those who produce thirty, sixty and a hundred-fold.

On that note, regardless of the secularist view of some, we will not solve the vocation crisis by allowing married priests, which implies an erroneous view of what the priesthood really is: A man, like Christ, offering his life for many, and not for one. Au contraire, it is only by emphasizing, with our Lord, the need to ‘give all’ that will we inspire young men to actually do so.

This may seem difficult, especially at the youthful dawn of life, with human love so attractive, which is likely why the young man in the Gospel ‘went away sorrowful’; but the consecrated life, chosen and embraced in freedom, in accordance with God’s will, offers a joyful and grace-filled path, freeing one from the travails and anxieties of marriage, whatever its own pleasures and graces and opportunities for perfection, as many parents can attest.

In the end, we are all called to some sort of fatherhood or motherhood, whether of the more biological or the more spiritual sort. The thing we must all remember is that we are not made for this life alone, but for the next, and, in whatever path we are called or stumble upon, we should lead as many there as God gives us the grace.