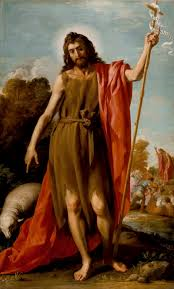 In Saint Luke’s Gospel, Jesus spoke highly of John, saying to the crowds: “I tell you, among those born of women none is greater than John; yet he who is least in the kingdom of God is greater than he” (Luke 7:24. 28). If Jesus gave so much honour to John, thus placing him above all men, who are we to diminish, even for a second, his great holy stature in front of God?

Furthermore, John was the precursor of Christ as well as the bridge between the Old and New Testament, an aspect which the Eastern Church rightly highlights. In his Sermon 293, which had as a theme: The voice of one crying in the wilderness, St Augustine explains to us:

John, then, appears as the boundary between the two testaments, the old and the new. That he is a sort of boundary the Lord himself bears witness, when he speaks of “the law and the prophets up until John the Baptist.” Thus he represents times past and is the herald of the new era to come. As a representative of the past, he is born of aged parents; as a herald of the new era, he is declared to be a prophet while still in his mother’s womb. For when yet unborn, he leapt in his mother’s womb at the arrival of blessed Mary. In that womb he had already been designated a prophet, even before he was born; it was revealed that he was to be Christ’s precursor, before they ever saw one another. These are divine happenings, going beyond the limits of our human frailty. Eventually he is born, he receives his name, his father’s tongue is loosened.  See how these events reflect reality.

It was the angel Gabriel, who later went to announce Mary that she was chosen by God to bear His Son Jesus in the womb, that gave Zechariah the name for his child. He told him: Do not be afraid, Zechari’ah, for your prayer is heard, and your wife Elizabeth will bear you a son, and you shall call his name John(Luke 1:13). The name John is very meaningful. The Hebrew name Yohanan (יוֹחָנָן‎), means “Graced by Yah”, or Yehohanan (יְהוֹחָנָן‎), “Yahweh is Gracious”. God’s mercy is at the basis of this name. How this name of John perfectly correlated with the name of Jesus, Yēšûaʿ(יֵשׁוּעַ) which literally means “Yahweh saves” or “Yahweh is salvation”! The one whose name means “God is gracious” was to prepare the way for the One whose name is “God who saves”. Taken together both names make a perfect harmony since the God is gracious because he saves. In other words, he translates his mercy into saving acts of salvation!

Another detail which touches my heart about John is that from his mother’s womb he started to live what he was to assert later on in his life: He must increase, but I must decrease (John 3:30). For John we could easily apply the words we find written in the book of the Prophet Jeremiah: Before I formed you in the womb I knew you, and before you were born I consecrated you; I appointed you a prophet to the nations.” (Jer 1:5). From his mother’s womb John was the first one to be open to the joyous radiant presence of Jesus. Luke could not help this foundational detail passing by without pinpointing to it through Elizabeth’s gesture and words: And when Elizabeth heard the greeting of Mary, the babe leaped in her womb; and Elizabeth was filled with the Holy Spirit and she exclaimed with a loud cry, “Blessed are you among women, and blessed is the fruit of your womb! And why is this granted me, that the mother of my Lord should come to me? For behold, when the voice of your greeting came to my ears, the babe in my womb leaped for joy (Luke 1:41-44).

But what is special about John? Origen’s comment about him in his Homilies on St Luke, no. 4, 4-6, is enlightening: Scripture then says: “Many of the sons of Israel will he bring back to the Lord their God.” (Lk 1:16) John brought back “a large number”; the Lord brought back not a large number but everyone. For it is his task to bring all men back to God the Father (…). John was the one who bore witness to the Light of the World. In the Gospel prologue of John this is so clear: John bore witness to him, and cried, “This was he of whom I said, `He who comes after me ranks before me, for he was before me.'” (John 1:15). Moreover, John also publicly … confessed, he did not deny, but confessed, “I am not the Christ” (John 1:20). Then, he continued: I am the voice of one crying in the wilderness, `Make straight the way of the Lord,’ as the prophet Isaiah said (John 1:23).

John’s clarity about his role versus the much-awaited Messiah gave him the power to witness to the Saviour of the world till the last drop. He was ready to be annihilated for Christ, the light, so that the Messiah would eventually triumph by his mission which culminated in his passion, death, and His final resurrection over the darkness of sin and death. In his homily in the Solemnity of the Nativity of St John the Baptist of 2013 at Holy Mass in Casa Santa Martha, Pope Francis said:

In sum, he is “a voice, not a word, a light but not his own, John seems to be nothing”. This is John’s “vocation”. When we contemplate the life of this man, so great, so powerful — everyone believed he was the Messiah — when we think of how this life was annihilated, his last days spent in a dark prison, we discover a mystery. We only know that his head ended on a platter as a great gift from a dancer to an adulteress. I believe it is impossible to sink any lower, to annihilate oneself.

Then, the Argentinian Pope added: The model we are offered today is John, the model of “a Church ever at the service of the Word. Pray for the grace to imitate John, to be solely a Church-voice which points to the Word, even to martyrdom.

John’s humility brought the Eastern Church to shower on him heaps of praise in the Akathist hymn to Saint John, Forerunner and Baptist of the Lord. To the one who said: Among you stands one whom you do not know, even he who comes after me, the thong of whose sandal I am not worthy to untie (John 1:26-27), the Eastern Church calls him ineffable confidant of the counsel of God, fulfillment of His marvelous dispensation, joy and gladness of a priest of God, God-given fruit of prayer, end of the prophets and beginning of the apostles, renowned voice of the Word, manifestation of divine wisdom and thundering preacher of repentance.

May the solemnity of St John the Baptist’s Nativity help us to amend our ways and return to the Lord by genuine repentance. As Origen tells us in his commentary on the Gospel of Luke:The spirit and the power of John must first fill the soul of whoever is destined to believe in Christ Jesus, “to prepare for the Lord a people well-disposed” (Lk 1:17) and to “make ready the way of the Lord, [to] clear him a straight path” (Lk 3:5) in the roughness of their hearts. Not only at that time were “the winding paths (…) made straight and the rough ways smooth”; rather, the spirit and the power of John still go before the Lord and Savior’s coming today. Oh greatness of the Lord’s mystery and of his plan for the world!

Lord, by the birth of Saint John the Baptist deepen our love for all unborn babies, who must be given the chance to grow, to live, and to become the great men and women You invite them to be. Lord you respected the laws of human biology when intervening in our human history. Help us to follow your Holy example of seeing every child, every life, as a gift. Amen.