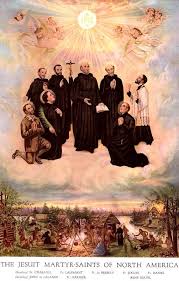 We are living in dissociated times – and by that I mean that we have become unhinged from our moral law, our customs, our traditions and our history. As the new barbarians take power – those who can only destroy what others have built – we should strive to preserve at least some knowledge of whence we came and whither we go, which is one of the purposes of this humble apostolate of Catholic Insight. Rather than always looking for the next titillating scandal or disturbance, ponder God’s holy work, a significant part of which are the glorious deeds of his saints, who lived through their own ‘dissociated’ times, always with the deep knowledge that the Almighty has all things in hand, and laughs the kings of this world to scorn, and their sneers will wither, as with trembling lips they realize what they have done.

It is with these thoughts in mind that we should celebrate the Holy Canadian martyrs on this day in our noble Dominion, six priests and two laymen, put to death for the Faith between 1642 and 1649. In the universal Church, they are celebrated on October 19th, when the layman Jean de la Lalande was put to death in 1646, one day after the priest whom he was serving, Isaac Jogues, was also martyred in what is now Auriesville, New York, where a shrine now exists.

Here in Canada, we celebrate the martyrs on this day, September 26th, perhaps because it may well be too cold in mid-October, and our bishops would rather commemorate these secondary patrons of this fair Dominion while the gold and crimson tapestry of fall colours are beginning to fully manifest themselves. The others members of this noble band of men who gave everything for God are Jean de Brebeuf, Gabriel Lalemant, Antoine Daniel, Charles Garnier,  and Noel Chabanel, all put to death near Midland, Ontario, while René Goupil, a layman, was the first, also in New York, in 1642.  All were members of Saint Ignatius’ merry band of Jesuits, back in the most zealous, unified, and intrepid early days of the Society, which did untold work holding the Church together in those fractious years, torn by war and religious division.

Each of their stories, their backgrounds, how they ended up on the missions, are all different. But they were one in their religion, their orthodoxy, their dedication to the Faith, in the rule and ideals of Saint Ignatius, as well as their desire to spread the joy and hope of that faith to their Native brethren, who, for all their noble qualities, contrary to modern myths, were by and large mired in despair and misery.  One of the sad revisionisms of late is painting pre-colonial, which means pre-Christian, life in Canada as an Edenic paradise, in the rosy hues of Rousseau’s bon sauvage. As the vivid, detailed and all-too-human accounts of the Jesuit Relations make clear, life in the wilderness was anything but ideal, with brutality, sexual licence, flies, dirt, thick smoke in longhouses, bitter cold, and early death by disease, infection, starvation or war perpetually lurking just around the corner.  ‘Savage’ may now be an inappropriate term for the first nations, as the saying goes, but it is accurate enough to describe their eked-out existence.

The Jesuits and their fellow missionaries were sadly accompanied and followed by unscrupulous men who gave Catholicism, and European culture in general a bad name, a trend that, need we belabour the point, continues today, and is now accelerating under the neo-savagery of our modern era. Yet the good more than outweighed whatever imperfection there was, something our modern, jejune virtue-signalers should learn. From the manly courage and virtue of Jean de Brebeuf to the milquetoast pusillanimity of the mammy-singing Justin Trudeau is not a mark of progress.

These Jesuits were men of noble ideals, for which they worked indefatigably their entire lives, in the midst of the same hardships as their beloved Natives, for whose good they were willing to suffer and die; and die they did, in the most horrific of ways. Indeed, they were even desirous of such a death, to shed their blood for Christ, and for the conversion of all peoples to Him and His salvific truth, and none more so than the powerful, yet gentle, giant Jean de Brébeuf. As he once confessed in his spiritual journal:

in truth I vow to you, Jesus my Saviour, that as far as I have the strength I will never fail to accept the grace of martyrdom, if some day you in your infinite mercy should offer it to me, your most unworthy servant…

My God, it grieves me greatly that you are not known, that in this savage wilderness all have not been converted to you, that sin has not been driven from it. My God, even if all the brutal tortures which prisoners in this region must endure should fall on me, I offer myself most willingly to them and I alone shall suffer them all.

Indeed. A true man, and saint. We may not have to give up our lives, but we must do what we can to stand against the tide of this culture of death, made all the ironically worse by an panic-driven fear of death, and be counted, and proclaim the truth, boldly and without compromise or complaisance.  Jean de Brebeuf recalled of the Natives that if you picked up a paddle in their canoes, you had to ply it all day; also, they expected you to carry your own fair share on the portages, silently, without complaint; and all of this on a handful of cornmeal at breakfast.  They would take the measure of a man by how much he could endure, and they were impressed by the steadfastness of the ‘Blackrobes’, not least de Brebeuf, whom they called ‘Echon’, a term of great respect and admiration.  Father Brebeuf was martyred at the age of 55, and I have oft wondered what he looked like – his noble Norman face weathered and lined by his years outside in the elements in the missions, his eyes radiating kindness, holiness and a zeal – that he would give anything to save your soul alone. Eric Blair (George Orwell) commented once that we get the face we deserve at 50 – and I’m sure there are exceptions – but, more to the point, we do get the soul we have forged, or not forged, by the grace of God, in the days of our youth, and it is that soul which shines forth through our face.

In our diminished and dissociated homo urbanus lives, we could stand to gain some small share in the fortitude of our spiritual ancestors, to whom this country owes so much, indeed everything, yet now knows so little.

The last of the martyrs to meet his glorious end, Noel Chabanel, who had such an antipathy to the work, and could never really learn the language, and who had to bind himself by vow to stay, was hatcheted by a renegade Huron by a remote river. Hidden and unobserved, his offering may well have been the most fragrant of all. That was on December 8th, 1649, the solemnity of the Immaculate Conception – a fitting day to close off their sacrifice.

Each year, our College has made a pilgrimage to the site of the martyrdoms of Jean de Brebeuf and Gabriel Lalemant, on the anniversary of their deaths in mid-March. We trudge through the snow, as they did (but they in bare feet and stripped!), praying and celebrating an outdoor Mass. I believe it to be one of the holiest places in Canada, and I return personally during the summer months on my own. I had the privilege of leading a family there this past August, and, watching young children pray before the crosses where these saints met their end, I thought, there is hope for our country yet.

Our bishops consecrated Canada to Our Lady Immaculate on this day four years ago, so let us beseech her intercession, along with these holy Jesuits, for this fair Dominion,  that their sufferings may bring back the Faith to a people who know not what a treasure they have lost.

Prayer to the Canadian Martyrs

Holy Martyrs and patrons,
protect this land which you have blessed
by the shedding of your blood.
Renew in these days our Catholic faith
which you helped to establish in this new land.
Bring all our fellow citizens
to a knowledge and love of the truth.
Make us zealous in the profession of our faith
so that we may continue and perfect the work
which you have begun with so much labour and suffering.
Pray for our homes, our schools,
our missions, for vocations,
for the conversion of sinners,
the return of those who have wandered from the fold,
and the perseverance of all the faithful.
And foster a deeper and increasing unity among all Christians.

PRAYER TO ST. JOSEPH
(Patron of the Martyrs and of Canada)

O God,
who in your special Providence
deigned to choose blessed Joseph
to be the spouse of your holy Mother,
grant, we beseech you,
that we may deserve to have him
as our intercessor in heaven
whom we venerate on earth as our protector;
You who live and reign world without end.

PRAYER TO OUR LADY

Glorious Queen of Martyrs,
to whom the early missionaries of this country
were so devoted and from whom they received so many favours,
graciously listen to my petition.
Ask your Divine Son to remember all they did for His glory.
Remind Him that they preached the Gospel
and made His Holy Name known to thousands
who had never heard of Him,
and then for Him had their apostolic labors
crowned by shedding their blood.
Exercise your motherly influence as you did at Cana,
and implore Him to grant me what I ask in this novena,
if it be according to His holy will.

O God,
who by the preaching and the blood of your blessed Martyrs,
John and Isaac and their companions,
consecrated the first fruits of the faith
in the vast regions of North America,
graciously grant that by their intercession
the flourishing harvest of Christians
may be everywhere and always increased.
Through Christ our Lord.

O God,
who inflamed the hearts of your blessed Martyrs
with an admirable zeal for the salvation of souls,
grant me, I beseech you,
my petitions and all the requests recommended here today,
so that the favours obtained through their intercession
may make manifest before men
the power and the glory of your name.

St. Isaac Jogues,
pray for us.

St. Gabriel Lalemant,
pray for us.

St. Anthony Daniel,
pray for us

St. Charles Garnier,
pray for us.

St. Noël Chabanel,
pray for us.

St. René Goupil,
pray for us.

Holy Mary, Queen of Martyrs, pray for us.