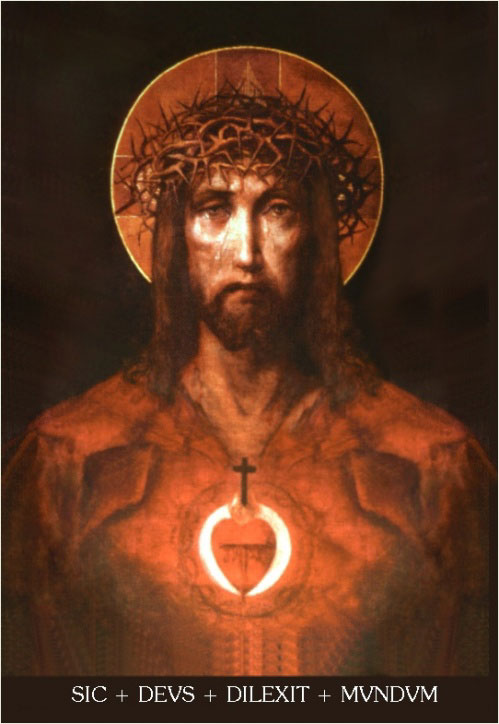 Today’s solemnity of the Sacred Heart is of rather recent provenance as Church history goes.  Although the full humanity of Christ, body and soul, was defined clearly in the first series of ecumenical Councils of the Church, the notion of worshipping and honouring the ‘heart’ of Jesus has its roots in the early Middle Ages, with Saint Bernard of Clairvaux and the Cistercians, Saint Bonaventure and the Franciscans, as well as the Jesuits, who took the heart as their symbol, before culminating in the visions of Saint Margaret Mary Alacoque (+1690), as compiled and published through her saintly spiritual director, Saint Claude de la Colombiere.

This devotion flows naturally from what we believe of Christ: That His divine Person is united hypostatically (that is, in the ‘hypostasis’ or ‘Person’ of the divine Logos) with His human nature, including His human body. Of course, we honour Christ’s entire body, blood, soul and divinity, which we receive in Holy Communion under the mystical species.  But we honour the heart specifically as the seat of the emotions, the symbol of love and affection, as that which suffers and bleeds for another. ‘Out of His heart shall flow rivers of living water‘, Christ declared of Himself (John 7:38).

Saint Thomas wrote that revelation is always attuned to our own capacities, sensitivities and proclivities,. Our tradition, even in the secular realm, has the ‘heart’ as the centre and locus of our affective life. The word ‘heart’ is mentioned hundreds of times in the Bible (depending on how one translates the Hebrew term lev, which, providentially, sounds like our English ‘love’), and in songs and poetry throughout the ages, up to all the modern ballads sung with such heart-felt intensity, to make up, one supposes, for what they lack in talent and musicianship.  Oh Bach and Palestrina, where art thou!

Yes, devotion to the ‘Sacred Heart’ may descend into saccharine spirituality and kitsch art, but the central point is sound:  That Christ loves us with His whole being, not just as God, but as Man, with His human heart that moves Him to have mercy and pity, willing the salvation of all men, and drawing all to Himself, even to the point that we from our humanly, earthly perspective might find mysterious, even disconcerting. His mercy always triumphs over His justice. Get behind me Satan, was Christ’s response to the ‘logic’ of Peter, trying to find a non-suffering way for Christ to save Man. Christ follows a higher, supernatural ‘logic’, if you will, the way of the word. Suffering is the way of love, and love always, always implies giving oneself for the other, in some way.

We can resist that love if you like, but why would we? As the tag line for one musical had it, resist no longer, but give ourselves to the infinite love of Christ, leading us to eternity and eternal joy with Him in Trinitarian communion, of which all our loves in this life, even the greatest and most passionate, are but a dim reflection.

A blessed solemnity to one and all.

Most Sacred Heart of Jesus, have mercy on us.