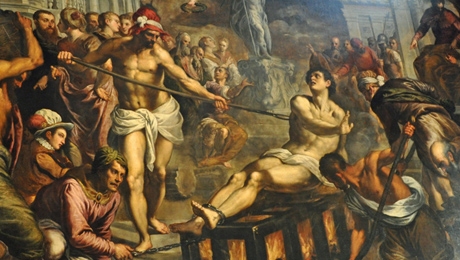 Saint Lawrence (+258) lives on in legend, a Spaniard from Valencia, chosen in the very bloom of his early maturity by the intelligent and saintly Pope Sixtus II to be Archdeacon of Rome, in charge of distributing the wealth of the Church. It is said that Lawrence’s parents were martyrs – how soon after his birth we know not, but they must have had a good hand in raising the lad before their final witness and entrance into eternity.

Lawrence’s own sanctity shines through the ages and the legends told of him. In the persecution in the reign of Emperor Valerian in 258 – in which Pope Sixtus himself and some companions were killed a few days before our Lawrence – all Christians were commanded to apostatize, worship the pagan deities, or in all likelihood face a swift and sure death. They came for the Pope on August 6th, and then for Lawrence, from whom they demanded all the Church’s riches, to be put into the Emperor’s coffers. Lawrence asked for a few days to get things organized.

He took the time to distribute as much of the wealth to the poor as he could, to keep it off the hands of greedy and wasteful Roman officials. He then gathered together all the same poor, the lame, the sick and other ‘deplorables’, and said to the magistrate, who was licking his chops in anticipation of buckets of gold coins: ‘Behold, here are the Church’s riches’ declared the Deacon, ‘The Church is rich, far richer than your emperor!’

The Magistrate, furious at his avarice being so publicly mocked, ordered Lawrence to be slowly roasted over a gridiron, rather than the relatively merciful decapitation. When he had been suffering for quite some time, Lawrence cheerfully retorted to his tormentors: ‘You can turn me over…I’m quite done on this side’. He was not yet 33 years old, and, is, not surprisingly, the patron saint of chefs, cooks and comedians.

The Perseid meteor shower, which usually occurs around this time in mid-August, are often called the ‘Tears of Saint Lawrence’, although, if tears they be, they are those of laughter. After all, a ‘comedy’ in literature – as in Dante’s Divina Commedia – is a story that ends well, even if the characters traverse much suffering along the way. Hence, the saints are all comedians, as should be all Catholics.

The gridiron is on display at San Lorenzo fuori la Mura, his principal church in Rome, one of the Church’s seven major basilicas, and Lawrence’s charred head is displayed on his feast day in Saint Peter’s basilica. I have prayed at length before the gridiron, but have yet to see his head. The Church indeed revels in our incarnate natures.

We need more cheerful saints, who look upon the world and their own lives, as a path and a means to a much more real life, and so can see things in perspective, with an air of healthy detachment. As Pope Leo XIII put it, it is only in heaven will we truly begin to live.

So laugh a little, and be not anxious for the morrow. Let the evil of the day be sufficient thereof. The form of this world – and the form of our bodies – is passing away, to be transformed in a blink of an eye into something far, far more glorious.

A postscript on the grim, cheerless persecutor Valerian – a few years later, in 260, he had the ignominy of being the first Roman Emperor captured in battle, by the Persians, sending a shock of dismay and despair through the Empire. He was made a slave, and it is said that the once-mighty Caesar was used by Shapur, king of Persia, as a footstool to mount his horse, and then his body stuffed after death as a monument, of sorts, of Persian triumph. The rulers of this world, filled with hubris, will have their day, and God will in His own time laugh them to scorn. We can only hope that his own sufferings and humiliation, and the prayers of Lawrence, saved Valerian, and they’re together in heaven. After all, one never knows the ways of salvation of each soul – God writes with what to our perspective seem crooked lines – and, to paraphrase the much-later Saint Jean Vianney, some are meant to bring many in their own holy and glorious wake.