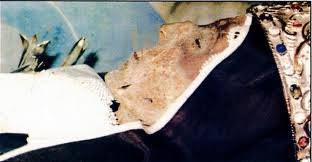 Margaret of Castello (+1287 – 1320) is the patroness of the unborn, the disabled, the blind and, we may add of our own limited authority in these matters, of the shut-in, whose numbers have dramatically increased of late due to a certain virus which I am loathe to name.

Little Margaret – she never grew more than four feet tall – was born to noble parents, her father with the Shakespearean name of Parisio, the head of the garrison at Metula castle in Mercatello sul Metauro, in east central Italy, not far from Ancona, her mother, Emilia. The beautiful, successful couple – mediaeval yuppies, or even ‘dinks’ (double income, no kids) – were embarrassed of their deformed daughter – she was also hunchbacked, hobbled along with a limp, mostly blind with homely features. So no one would ever see her, her father had her locked up in a room at the back of the castle, and had it welded shut. In some small – but inadvertently large – mercy, he allowed her to attend Mass and receive the sacraments.

Eventually, in 1303, at her mother’s urging, Margaret, now a sweet sixteen, but with no coming-of-age parties, nor any friends, nor anyone really, was taken to a local church known as a place for miracles. Seeking a sign, none was given, so they abandoned her. Taken in by the townsfolk, they marveled at Margaret’s radiant goodness, her humility and her lack of any resentment – in fact, only gratitude – towards her parents – those who in many wished had wished she had never been born.

Margaret, after being expelled from a local convent, eventually, with some help, made her way to the local Dominicans, and joyfully joined their lay Third Order, spending the rest of her brief life teaching catechism to the local children, as an act of thanksgiving to the good townspeople, never saying a bad word against those who had given her life.

Known for her holiness and simplicity of life, Margaret died on April 12th, 1320, in her very Christian thirty-third year, buried inside the local parish – a privilege the priest wanted to deny her – after a disabled girl was cured during her funeral. When her coffin was exhumed in 1558, the wood and her clothes had all rotted, but the body of Margaret was preserved, and she performs miracles to this day. We could sure use a few. And her body at that final resurrection will, I may presume, be more radiantly beautiful than many of those who consider themselves so in this passing age.

Blessed Margaret, beatified on October 19th, 1609, by Pope Paul V, is patroness of the unborn, since one might presume that if ultrasound had existed in the 14th century, her parents may have decided to abort her. Then again, perhaps they would not have – for they did feed and house her, even if in solitary confinement, and ‘abandoned’ her in a place where they knew she would be found. Dastardly deeds, to be sure, but we may hope that the prayers of their erstwhile daughter helped convert and save them at the end, as we may pray she does for all of us, and for all those who are even more abandoned than she – by the same act of abortion, of neglect, of lack of charity of all kinds.

We may also call upon Margaret, to intercede for all those in their own ‘confinement’ now – whether by enforced laws, by illness, by self-isolation, that they, and we all, may offer all things, pleasant and unpleasant, to the good God.

Our second play at Seat of Wisdom College was on the life of hunchbacked Margaret of Castello seventeen years ago, and I believe the good saint has guided us ever since. She signifies love at its purest – to love those who love us not. An a propos message in the glow of the Christ’s Passion and Resurrection, who causes His rain – and His grace – to fall on the just and the unjust, so that all men have the opportunity, and the very real hope, of being saved, if we but say fiat mihi secundum verbum tuum.