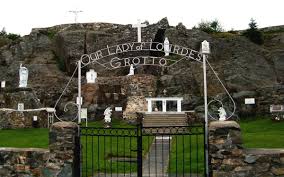 Our Lady of Lourdes is one of the few ‘visions’ of the Virgin Mary to be placed in the public Liturgical calendar of the universal Church, along with her appearances at Fatima and Guadalupe. All three have in common that the visionaries were simple, unlettered peasants, the anawim, the ‘poor of the Earth’, humble, expecting not much from life, faithful to the Church, pious and morally pure – and all of them went on to become saints themselves. As the priest says in Franz Werfel’s adaptation of the story – the play adaptation of which our College last year presented to wide acclaim – once one has seen the Blessed Virgin – a veritable glimpse of heaven – how can one return to a secular, worldly life?

On a cold winter day in 1858 in the south of France – looking outside at the frigid temperatures here in Canada, I realize that ‘cold’ is a rather relative term –  the Virgin Mary appeared to fourteen-year old unlettered peasant girl, Bernadette Soubirous, as she was gathering firewood with her siblings near the town dump as Massabielle, outside the little village of Lourdes, nestled in the foothill of the Pyrenees. In her own simple and guileless words:

I came back towards the grotto and started taking off my stockings. I had hardly taken off the first stocking when I heard a sound like a gust of wind. Then I turned my head towards the meadow. I saw the trees quite still: I went on taking off my stockings. I heard the same sound again. As I raised my head to look at the grotto, I saw a lady dressed in white, wearing a white dress, a blue girdle and a yellow rose on each foot, the same color as the chain of her rosary; the beads of the rosary were white….From the niche, or rather the dark alcove behind it, came a dazzling light

Bernadette did not know who the ‘Lady’ was, only that she was beautiful, prayerful and mesmerizing. She would pray and say the Rosary, and offered Bernadette various teachings, prophecies and ‘secrets’. This vision was followed by sixteen others, culminating on the solemnity of the Annunciation, March 25th. When Bernadette finally asked who she was, the Lady replied in the French patois of the region, que soy era immaculada concepciou, “I am the ‘Immaculate Conception”, a dogma that had been defined and proclaimed by Bd. Pius IX four years earlier, 1854. 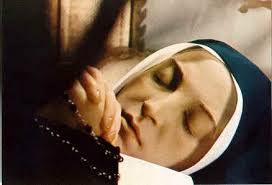 Our Lady asked for a chapel to be built, where miraculous waters would flow, something that seemed impossible in the remote, out-of-the way place. But, sure enough, a spring began to flow, still going strong a forty litres a minute, and Lourdes has now become one of the foremost pilgrimage sites in the world, welcoming four to six million visitors  per year, a beacon of hope for those seeking healing, physical or spiritual. Saint Bernadette’s body lies incorrupt in the convent of Nevers, where she spent the brief remainder of life as a professed religious, dying at the tender age of 36 her own battle of intense suffering of tuberculosis and bone cancer on the 16th of April, 1879. As Our Lady prophesied to the young visionary, ‘I do not promise to make you happy in this life, but the next...’

This is also the universal day of the sick, always a propos, but especially so as the coronavirus preludes what may happen yet again with plagues of yesteryear. As Pope Saint John Paul II taught, our world has lost the true sense and purpose of suffering, a natural consequence of the loss of a supernatural perspective, of Man’s eternal destiny. Hence, all our thoughts, desires, dreams are focused on this life alone, so brief, so limited, a subtle form of despair and the slothful sorrow of acedia.  Hence, the desire for a quick and painless death, assisted suicide, to go oh-so-gently into that great goodnight when the roses lose their bloom, and life its lustre. And, as readers may now be aware, our benighted Senate has just voted to remove most of the already-minimal safeguards around our own now-legalized euthanasia. We are well and truly mired in the muck of the culture of death.

But despair not. The great Pope taught in Evangelium Vitae that this temporal existence is only a ‘penultimate’ good, to be used well in preparation for our ultimate good, eternal life.  Without this dimension, life – to say nothing of the suffering it brings – cannot make sense, or the only sense is that there is none.  Hence, the bizarre philosophy of such proponents of hopelessness as David Benatar, who claims, in an ironic application of the words of Christ about Judas, that the best thing for any human is never to have been born.

But every life is of value, even those filled with the most suffering, as, again, John Paul taught so eloquently and profoundly in his masterpiece on the infinite value of suffering, Salvifici Doloris, promulgated on this day in 1984. Well, well worth a read, if you have not done so already, and one wise Jesuit priest remarked that this Apostolic Letter may be amongst the most important and prophetic works of the Holy Father’s corpus.

Christi has invited all of us to participate in His own salvific work, and we should unite our prayers this day, and throughout the year, with those of the sick, along with all of our own crosses, especially those especially sent to us by God. As Saint Theresa of Calcutta declared, ‘suffering is the kiss of Christ’.  We should rejoice in our health, but also in our own salvific suffering in whatever way it may come to us.

Our Lady of Lourdes and Saint Bernadette, orate pro nobis!