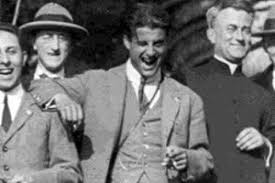 One of the more joyful and attractive saints of modern times died on this day in 1925 at the youthful age of 24, Pier Giorgio Frassati, a handsome, young, athletic, talented Italian from an aristocratic family, carried away by the poliomyelitis he had contracted from his (mainly hidden) work with the poor, to whom he would carry food and necessities himself, making a detailed list of who they were and what they needed. Besides his charitable endeavours, Frassati’s talents were unbounded who spread the faith by his sheer charisma and energy: An avid mountaineer and hiker, scaling some of Italy’s grandest peaks; he could recite long sections of Dante with ease. He would attend concerts, get-togethers, rallies, but would only go to the new-fangled films if he was sure of their moral quality – he could not stomach impurity and vice, and was an immediate foe of the fascist-socialist regime of Benito Mussoini. Although he danced adequately, he never liked it quite as much as he put on, but good male dancers are thin on the ground, and one may surmise that it was chivalry that motivated him in many such things. Although in love once, he thought his parents would not approve of the marriage, and relinquished his hopes, a sacrifice that cost him dearly, as he once confided to his sister. 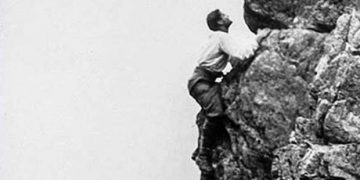 His chastity, purity and simplicity; his good humour and indefatigable help of others, (which really was his greatest joy); his devotion to the faith, to the Holy Mass and Rosary, his love of Italy and all things Italian, of music and song and the outdoors, attracted many to him – although I remember reading he confessed to not having a good singing voice, which, with a bit of what I hope is innocent schadenfreude, I was sort of glad to read, that this gifted man did not have every charism under God’s sun. Pier Giorgio has become not just a patron of youth, but a very icon of how one’s first formative years may be well spent.

Like Saint Thérèse, Pier covered a lot of ground quickly, and God took his sanctified soul to heaven while young, so to leave us, perhaps, with a vivid picture and example of goodness and perfection in its integral and primordial form, of body and soul, an image, however distant, of what we were in that primoridial Garden; so we will be in heaven, but in a far more perfect way.

Pier was peaceful and resigned in his lingering torment from the polio, his once fit, muscular body soon reduced to a skeletal frame. He even peacefully accepted the denial of morphine by order of his mother – which she saw as unfitting – not realizing what agony her son was in.

His parents expected a few dignitaries and family friends at his funeral; they were shocked to find the streets thronged with thousands of the people of Turin, the poor, the maimed, the abandoned, including all those he had helped secretly; truly, his name was proclaimed from the housetops! When Pier Giorgio’s body was exhumed in 1981, it was found to be incorrupt. He is the patron saint of youth, and his body has been moved from its final resting place in Turin’s cathedral twice, for the World Youth Days in Sydney (2008) and Krakow (2016).

The process of the official recognition of his sanctity was put on hold by Pius XII after rumours circulated, cavorting the mountains in ‘mixed company’ for ‘immoral purposes’, which turned out, of course, to be utterly false, indeed the opposite of the truth, not realizing that Pier Giorgio’s whole intention was to instill and foster purity and chastity in his fellow youth. What better way to overcome the ‘noonday devil’ that vigorous exercise and the great outdoors, all the while singing God’s praises?

Modern society is drowning in the sorrows of human passions and it is distancing itself from every ideal of love and peace. Catholics, we and you, must bring the breath of goodness that can only spring from faith in Christ

After the miraculous cure of a boy named Dominic, , Pier Giorgio was beatified on May 20th, 1990 by Pope John Paul II, who in his own youth as Karol Wojtyla resembled the beatus in many ways. Perhaps they are climbing mountains together in heaven as I write, or at least will when their bodies are reunited with their souls at the end of time in that new heaven and new earth; we should all hope to join them one day, Deo volente, even if we take a bit longer time and a more circuitous route, alas, than the good Pier Giorgio. We need more of his hope, his joy, and his true Catholic optimism, that however bad things seem, in the end, all manner of things shall be well…

I will leave you again with his own words, in which we should all live in that joy that has no contrary:

You ask me whether I am in good spirits. How could I not be, so long as my trust in God gives me strength. We must always be cheerful. Sadness should be banished from all Christian souls. For suffering is a far different thing from sadness, which is the worst disease of all. It is almost always caused by lack of Faith. But the purpose for which we have been created shows us the path along which we should go, perhaps strewn with many thorns, but not a sad path. Even in the midst of intense suffering it is one of joy