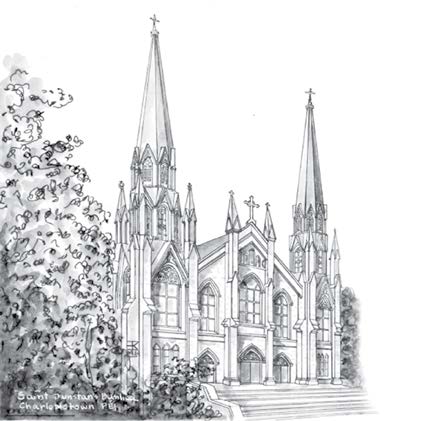 Ever read an email that made you wince? I don’t mean because of off-colour jokes but because of grammar—such as when you see, “Its going to be a long meeting” (did they forget the apostrophe or do they not know better?) or when a colleague complains, “There proposal was ridiculous!” You wince, you reel, you wonder if civilization will survive.

In a healthy language grammar is living. Still, the masters of the English tongue—the Shakespeares, the Newmans, the Richard Wilburs—were first servants. Like all true craftsmen they submitted themselves to a long apprenticeship, a long study of the rules, before they thought of extending them. Architecture, too, has its own language. Its forms are regulated by a set of rules. These rules are the fruit of centuries of hard-won experience. When it comes to the design of churches, this “organic logic” is governed by what we might call the grammar of worship. It is a grammar inspired by revelation and watered by tradition. With sharp relief, we see in these two recent West-coast churches what happens when that grammar is grasped or ignored.

Thomas Aquinas College’s chapel (2009) is a graceful articulation of a house of Catholic worship. With balanced classical elements (e.g. the tower and dome), elegant symmetry (note the spacing between the arches), and those baroque details which situate the structure in the history of America’s Spanish missions, it is a monument to living tradition.

What of the cathedral? It is the creation of super-star Spanish architect Rafael Moneo. Whatever else it is, at $250 million, Los Angeles’ Our Lady of the Angels Cathedral (2002) [pictured above] went way over budget. Like a spam email, LA’s Cathedral is painful to look at even while it’s difficult to ignore. Unlike the chapel, the Cathedral’s monolithic face, irregular floor plan, and protruding angles, manifests a shape more like a Soviet Mausoleum than a house of prayer. Perhaps architectural geniuses dont [sic] need grammar; we at least wish they could learn how to spell.