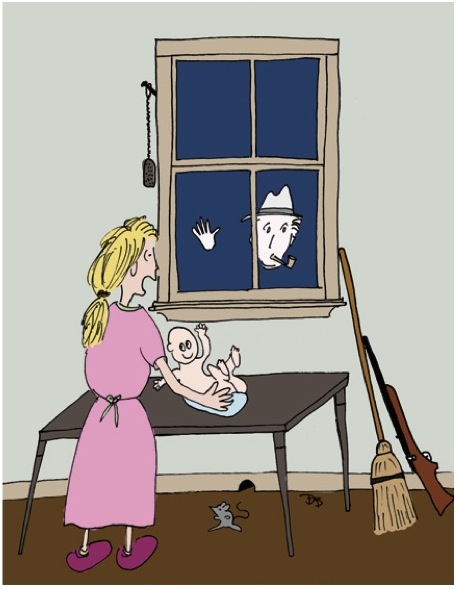 “This way,” he said; “mind the steps by the staircase. This house is more crooked and old-fashioned than you would think from its snobbish exterior. There are quite a lot of odd corners in the place really.” – G. K. Chesterton, The Club of Queer Trades

When we bought our old farm house many years ago, my wife was expecting. The family we purchased the house from were descendants of the original homesteaders who had come from the Isle of Wight in England in the early 1800s. In fact, I did not buy this house. I never saw it—my wife bought the farm and told me about it when I got home that night. “Guess what, honey?” I recall her saying, and then, before I could guess, (How could I guess?): “We have a new place to live!”

After we had been living at the farm for three months, our sixth child, Hugh, was born. The original owners visited us and brought gifts. Then, over tea and scones, they told us that Hugh was the first child born to that house since 1918. It is funny how things stay in one’s mind. I suppose we got the idea that a baby was a strange phenomenon to the house or something, because I have no other explanation for what followed.

Our new house was the usual combination of oddities in an old farm house: gently sloping floors, creaking doors, and unidentified noises at night. Sometimes when I entered a room, I would see out of the corner of my eye a movement—like a shadow on the wall—going around a corner. I interpreted this as a flickering light bulb or clouds passing across the moon. I mentioned this one time to Theresa, and her response surprised me.

Neither of us had actually seen a person. Both of us had only caught glimpses. But Theresa somehow had the understanding that the silhouette she saw was a man’s. I saw more of a shadow that was somehow in the space of the room. Curiously, neither of us was frightened. We only felt only a mild bewilderment, nothing else.

Things took a dramatic turn one night when Theresa was changing the baby. She was in the old pantry, which had a window that originally faced the east side of the yard but now opened into a mudroom. As Theresa glanced up from the change table, she saw the face of a man in his mid sixties looking through the pantry window at the baby with a quizzical look, as if he was puzzled by what Theresa was doing. I heard Theresa’s startled yell and rushed into the pantry.

“I saw him, right there, looking in.” Again, she was not scared so much as surprised. “He was just watching what I was doing. He seemed to be curious.”

I looked everywhere outside for someone or something, but found nothing. Neither of the dogs had barked, which they always do whenever anyone comes near the house. I then tried to reproduce a reflection in the window by turning lights off and on and standing at different places, but could not get any image.

We had our parish priest come over to bless the house and the farm, and particularly the well—too much can go wrong with wells to not have them blessed. After that, there were no more sightings or even glimpses.

I have heard similar stories from other people, family and friends, tales of odd things that cannot be explained away. I have no idea if such sightings or stories are real or just products of an over-active imagination, crossed wires in the brain caused from being too tired at the end of the day.