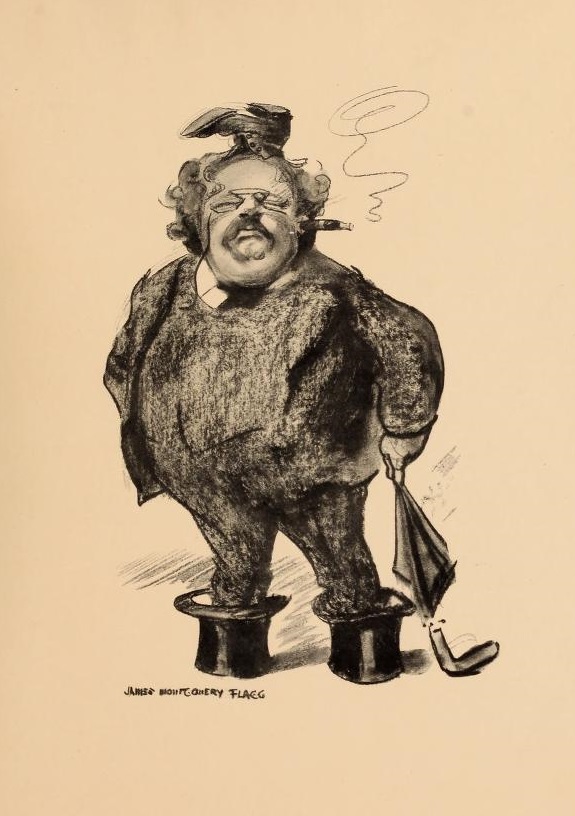 Orthodoxy, Chapter 4: “The Ethics of Elfland” by G. K. Chesterton

When the business man rebukes the idealism of his office-boy, it is commonly in some such speech as this: “Ah, yes, when one is young, one has these ideals in the abstract and these castles in the air; but in middle age they all break up like clouds, and one comes down to a belief in practical politics, to using the machinery one has and getting on with the world as it is.” Thus, at least, venerable and philanthropic old men now in their honoured graves used to talk to me when I was a boy. But since then I have grown up and have discovered that these philanthropic old men were telling lies. What has really happened is exactly the opposite of what they said would happen. They said that I should lose my ideals and begin to believe in the methods of practical politicians. Now, I have not lost my ideals in the least; my faith in fundamentals is exactly what it always was. What I have lost is my old childlike faith in practical politics. I am still as much concerned as ever about the Battle of Armageddon; but I am not so much concerned about the General Election. As a babe I leapt up on my mother’s knee at the mere mention of it. No; the vision is always solid and reliable. The vision is always a fact. It is the reality that is often a fraud. As much as I ever did, more than I ever did, I believe in Liberalism. But there was a rosy time of innocence when I believed in Liberals.

I take this instance of one of the enduring faiths because, having now to trace the roots of my personal speculation, this may be counted, I think, as the only positive bias. I was brought up a Liberal, and have always believed in democracy, in the elementary liberal doctrine of a self-governing humanity. If any one finds the phrase vague or threadbare, I can only pause for a moment to explain that the principle of democracy, as I mean it, can be stated in two propositions. The first is this: that the things common to all men are more important than the things peculiar to any men. Ordinary things are more valuable than extraordinary things; nay, they are more extraordinary. Man is something more awful than men; something more strange. The sense of the miracle of humanity itself should be always more vivid to us than any marvels of power, intellect, art, or civilization. The mere man on two legs, as such, should be felt as something more heart-breaking than any music and more startling than any caricature. Death is more tragic even than death by starvation. Having a nose is more comic even than having a Norman nose.

This is the first principle of democracy: that the essential things in men are the things they hold in common, not the things they hold separately. And the second principle is merely this: that the political instinct or desire is one of these things which they hold in common. Falling in love is more poetical than dropping into poetry. The democratic contention is that government (helping to rule the tribe) is a thing like falling in love, and not a thing like dropping into poetry. It is not something analogous to playing the church organ, painting on vellum, discovering the North Pole (that insidious habit), looping the loop, being Astronomer Royal, and so on. For these things we do not wish a man to do at all unless he does them well. It is, on the contrary, a thing analogous to writing one’s own love-letters or blowing one’s own nose. These things we want a man to do for himself, even if he does them badly. I am not here arguing the truth of any of these conceptions; I know that some moderns are asking to have their wives chosen by scientists, and they may soon be asking, for all I know, to have their noses blown by nurses. I merely say that mankind does recognize these universal human functions, and that democracy classes government among them. In short, the democratic faith is this: that the most terribly important things must be left to ordinary men themselves—the mating of the sexes, the rearing of the young, the laws of the state. This is democracy; and in this I have always believed.

But there is one thing that I have never from my youth up been able to understand. I have never been able to understand where people got the idea that democracy was in some way opposed to tradition. It is obvious that tradition is only democracy extended through time. It is trusting to a consensus of common human voices rather than to some isolated or arbitrary record. The man who quotes some German historian against the tradition of the Catholic Church, for instance, is strictly appealing to aristocracy. He is appealing to the superiority of one expert against the awful authority of a mob. It is quite easy to see why a legend is treated, and ought to be treated, more respectfully than a book of history. The legend is generally made by the majority of people in the village, who are sane. The book is generally written by the one man in the village who is mad.