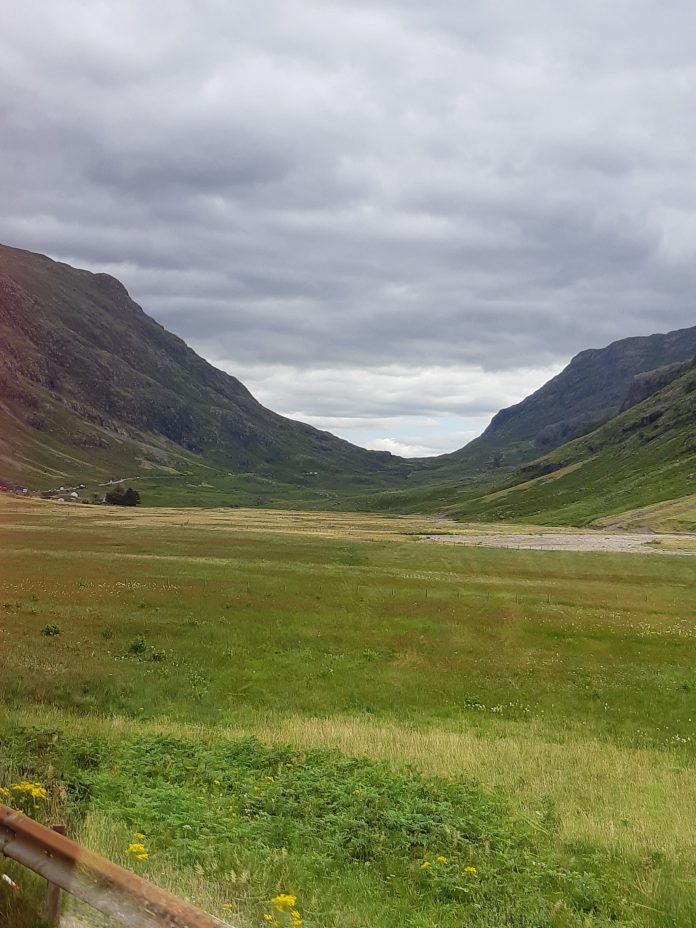 On the way to the Highlands, about thirty or so miles north of Dumbarton, one passes through a valley of sombre beauty and history, Glhinne Cunhamm, Glencoe, made infamous on February 13, 1692, when members of the clan MacDonald, numbers vary, but about two to three dozen, were massacred in cold blood, in the middle of the night, and in cold winter, by the King’s soldiers. What made matters worse, and the stuff of legend, was that the soldiers were guests in their houses, who killed their hosts while they were lying a-bed, an act of devilish ingratitude and cowardice. To their credit, some of the officers, as the story goes, broke their swords rather than participate, while others allowed potential victims a chance to escape across the snow.

This was during the time of the Jacobite uprising, those who resisted the 1689 usurpation of the throne (in their eyes) by William of Orange and his wife Mary (both staunch Protestants). This was called in official British history the ‘Glorious Revolution’, but did not seem so glorious to some, for the Highlander MacDonalds and numerous other clans supported the rightful claim of the Stuarts, under James II (a Catholic). Old resentments run deep from this incident, signified in the evil and ungrateful bloodletting, a vivid sign from the King to force the rebels into acquiesce.

The religious and monarchical zealotry of the Scots, which at least signified some interest in the deeper and more vital things of life, has waned of late, to put things mildly. What religion they have, such as it is, has been transferred to a quasi-religious devotion to multi-millionaire, insouciant, tattooed ‘football’ (that is, soccer for Canadians) stars, who enter their cathedral-esque stadia like demi-gods.

What energy this proud nation once had has been atrophied by too much booze, dependence on the ‘dole’, desultory ‘sex’ (made easy by NHS access to unlimited contraception and abortion), rampant drug addiction, and a general lack of interest in what used to constitute ‘life’. I suppose what holds for Scotland holds for most Western nations, alas.

Most of the jobs in Scotland that allow for a middle-class lifestyle of steady employment, good wage, holidays and early retirement and some escape from this malaise, are either governmental, or involve moving money around. Not exactly stable when unhinged from its own dependence on real things being really produced.

There is, as happens in all such systems, an increasingly feral underclass, who both envy and resent their overlords, a veritable division between the Morlocks and Eloi; it’s just that the latter have not become food for the former, yet.

I for one wonder what will happen should full-bore Brexit actually occur, and the whole United Kingdom is left hanging to its own devices. What sort of ‘real’ economy is there in a nation where not much is produced, except touristy nick-nacks?

At least in the time of King William, you could escape across the snow, back to your Highland croft. But where does one run to in a nation filled with ubiquitous CCTV cameras? And even if you escape their Sauron eye, the more insidious Google-opticon knows where you are at each moment, and what your’e purchasing?

Then again, why would the State now bother with force? There are worse evils than the edge of a claymore, for what are we to say of the innumerable citiizens, and I use that term advisedly, enslaved by sin, or mired in the media-induced hypnotic ignorance of Plato’s cave, their opinions formed by the amoral pundits on the BBC and the bland, conformist monolithic educational system. Such souls are is in prison regardless of where they go, while a free man is free everywhere. But freedom requires effort and discipline.

Could the nation rise again? The thing about we humans is our adaptability and resilience, our near-infinite capacity for good or evil, which stem from our being made in God’s image, with that scintilla of reason, never allowing us to rest easy for long. That is why socialism, in which Scotland, and Europe, are mired, creates unhappiness: We resent being ‘taken care of’ by the government, for we are meant to be free, self-made, independent, strong and bold, all traits of the Scots of old.

Sometimes, true enough, blood must be spilled to remind us of this, as Scripture testifies.

But we Catholics have the redemptive blood of Christ, through which we are offered the grace to perfect our nature, to resist evil and moral entropy, and to become the persons we are meant to be, even if we, or some part of us, must in some way die in the process.