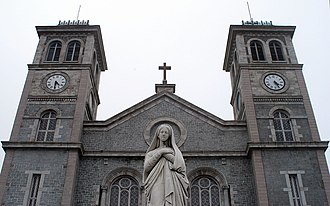 The feast of St Camillus de Lellis remains a very intriguing story which keeps speaking to us, even after four hundred years. Born on May 25, 1550, at Bucchianico (today’s Abbruzzo which was then part of the Kingdom of Naples) from Camilla Compelli de Laureto, St Camillus’ life proved to be a very difficult one. Bucchianico, today’s Abbruzzo, was then part of the Kingdom of Naples). His mother, Camilla Compelli de Laureto was fifty when she gave birth to him. His father served as an officer in the Neapolitan and French Royal armies. Lacking a paternal presence at home, together with the young Camillus’ difficult temper, made his mother helpless to control him. When in 1562 she died the young Camillus found himself totally neglected. This tragic event of his father’s neglect imbued the youngster Camillus with inordinate love for gambling.

When he has 17, a festering sore in his leg began to give him a lot of trouble since it was gravely afflicted with a terrible disease that would have cost him his life. After entering the San Giacomo Hospital in Rome as patient and servant, Camillus was thrown out after nine months. Then, he served in the Venetian army for some three years.

Following a disastrous gambling experience wherein he gambled his savings, weapons and everything he had, and lost all he had he started working at a Capuchin friary at Manfredonia. Here, at our friary, Camillus met the Lord, as one day he was touched by a sermon of the guardian of the fraternity there and within himself a conversion process kicked off.  The young man enthusiastically entered our Capuchin novitiate but, unfortunately, was sent out due to the probably incurable sore of his leg. Following another duty of service at San Giacomo, Camillus tried to join our Capuchin novitiate for the second time. However he was sent off once again, apparently for the same reason.

Nevertheless, his complete dedication for the sick never wavered or lessened. In fact, from here, Camillus became more convinced that God’s life project for him was to dedicate the remaining years of his life at the service of the sick. Aided by the advice of his advisor and friend, St Philip Neri, Camillus began the studies to become a priest. At the age of 34 he was ordained. Interestingly enough, against the advice St Philip, Camillus decided to quit San Giacomo and establish a new congregation of his own, the Camillians, which took at heart the care of the sick. When he was superior, St Camillus dedicated alot of his time caring for the sick.

Motivated by charity he also saw to it that hospitals per se should receive his careful scrutiny. As a matter of fact, Camillus heavily emphasized the hygenic and technical competence of all those who are serving the sick. The early Camillians were adamant to serve prisoners and people stricken with the plague and those who were dying in their respective homes. At this time some Camillians accompanied troops who were fighting in Hungary as well as Croatia in 1595. Thanks to their heroic service, these men remarkably recorded the first military field ambulance ever known in history. While in Naples, St Camillus and his brothers went on board the galleys that were plague stricken even though they were not given permission to land. Camillus noticed that people were just being buried alive, presuming they were already dead. Upon seeing this tragic thing unravelling before his eyes he wisely instructed his brothers to keep praying for the dying some 15 minutes after the apparent death.

His leg kept giving him trouble after trouble throughout his life. Having said that, such a painful situation helped him to keep being at the service of the sick up to the point that he bravely came out from his bed to make it available for other hospitalized patients who might need it.

St Camillus de Lellis died on July 14, 1614. He was beatified by Pope Benedict XIV in 1742 and was canonized by the same pope only four years later, that is in 1746. St Camillus De Lellis is the patron saint of the sick, hospitals, nurses as well as physicians. Furthermore, he is also invoked for the healing from gambling.

Nowadays, his spiritual family which he founded, the Camillians, continue St Camillus’ precious work within the field of healthcare in two very important ways: first, by their complete service to the sick and secondly by animating a ‘school of charity’ for all those who feel the beautiful vocation of caring for the sick. On the first basic value, that of total service to the sick person, which comprises the attention to corporeal and spiritual needs, St Camillus writes: If someone, inspired by the Lord God, wants to exercise corporeal and spiritual works of mercy according to our Institute…let him know that he should live…at the service of the sick poor, even though plague-stricken, as regards their corporeal and spiritual needs’ (St. Camillus, Formula di vita).

Regarding then the second basic value of helping health workers to keep excelling in the art of being present with utmost care and competence at patients bedside, St Camillus not only taught and encouraged everyone to provide assistance with all perfection as well as starting a nursing school with exact rules concerning assistance together with a prescribed list of tasks but also his life example amply showed his utmost dedication for the sick. His extraordinary biography tells us that when he took one of them in his arms to change his sheets he did it with so much affection and diligence that he seemed to be holding the very person of Jesus Christ…Very often when taking his leave he kissed them on their hands, or their heads, or their feet or their wounds as though these were the wounds of Jesus Christ (Vita manoscritta, p. 228s).

Deeply moved and led by St Camillus’ most convincing example, and especially empowered by the powerful intercession of Mary, Helper of the Sick, the Camillians today let themselves be inspired by St Camillus’ holy life to serve the suffering and caring for the dying with great solicitude and tenderness.

In his address to the participants in the General Chapter of the Order of Ministries of the Infirms (Camillians), on Monday 16, 2022, at the Consistory Hall in the Vatican, Pope Francis detailed the Camillian dream in these terms:

Our time is marked by individualism and indifference, which generate loneliness and lead to the throwing away of many lives. This is our culture today. Individualism, indifference, which generate loneliness and cause rejection: the throwaway culture. The Christian response does not lie in the resigned observation of the present or in the nostalgic regret of the past, but in charity which, animated by trust in Providence, knows how to love its own time and, with humility, bears witness to the Gospel.

This is what was achieved by your founder, who is one of the saintly figures who best embody the style of the Good Samaritan, of being close to the wounded brother along the road. In this choice of life lies the turning point to come out of the shadows of a closed world and to generate an open world (cf. Encyclical Letter Fratelli Tutti, chapters 1-3). To you, brothers, the gift and task of being inspired by him to look at the reality of suffering, illness and death with the eyes of Jesus. You will thus make of the Camillian prophecy an incarnated prophecy, which urges you to take on the burdens of others, the wounds and anxieties of your most vulnerable brothers and sisters. This requires docile openness to the Holy Spirit, who is the soul of every apostolic dynamism; and it requires a certain amount of boldness, to discover and travel together unexplored paths or express in new forms the potential of the Camillian charism and ministry.

How great, tangible and lifechanging is St Camillus’ and the Camillian dream!

St Camillus, special patron of the sick, who during forty years didst devote yourself with truly heroic charity to the relief of their spiritual and temporal miseries: since holy Church has confided them to your mighty protection, deign, from your heavenly glory, to come now to their assistance. Obtain for them either the cure of their maladies, or patience and Christian resignation, that they may be strengthened and sanctified and at the same time obtain for us the grace in life and death to imitate you in the practice of divine love. Amen.