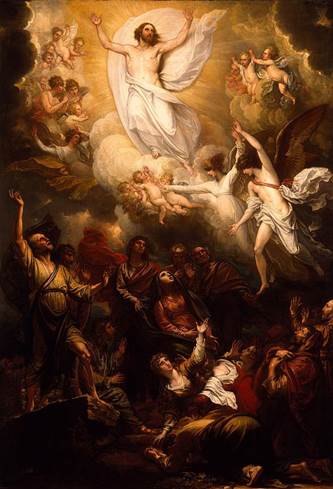 Men of Galilee, why do you stand looking up toward heaven? This Jesus, who has been taken up from you into heaven, will come in the same way as you saw Him go into heaven (Acts 1:11).

Our Lord’s Ascension which we celebrate today in the Church universal is both a historical and transcendent event (Catechism of the Catholic Church 660). Sacred Scripture speaks of this event as both an established historical fact observed by sensible experience (Cf. Lk 24:50) and as a theological event; that is to say as the exaltation and glorification of Jesus, the sign and seal of the accomplishment of His mission. The Ascension of our Lord marks also the end of that first period of mystagogy preached by our Lord Himself. Today’s Feast is like a bridge between the Resurrection of our Lord and Pentecost; and it is only in light of these events that the Ascension has any bearing on us for considered in isolation it merely tells us that Jesus ascended or returned to Heaven whence He came.

“No one has ascended into heaven but he who descended from heaven, the Son of man” (Jn 3:13). Our Lord ascends to heaven to prepare a place for us, His disciples. At the Ascension the Church learns the true meaning of her identity and we learn the full implications of Christian discipleship. The Ascension marks a point of transition; for what was called discipleship before Easter, is now more completely understood as mission. As we heard in the Gospel, “Jesus appeared to the eleven, and he said to them, ‘Go into all the world and proclaim the good news to the whole creation'” (Mk 16:15). Discipleship entails a participation in our Lord’s mission of salvation. Mission for the service of the world is the fulfilled discipleship of our Lord Himself for He was sent by the Father. “For God so loved the world that he gave his only Son, that whoever believes in him should not perish but have eternal life. For God sent his Son into the world, not to condemn the world, but that the world might be saved through him” (Jn 3:16-17).

“As the Father has sent me, even so I send you” (Jn 20:21). What this means for each one of us directly and personally, varies of course. What it clearly implies for all of us however, is the necessity of participating in some form in the Church’s mission or service to the world. The most obvious expression of this mission is the practice of the corporal works of mercy: feeding the hungry, clothing the naked, sheltering the homeless, visiting the sick and so on. The Apostle Paul reminds, however, that “the kingdom of God is not food and drink but righteousness and peace and joy in the Holy Spirit” (Rom 14:17). We serve the mission of Christ and of His Church best by heeding the Apostle’s exhortation: “If then you have been raised with Christ, seek the things that are above, where Christ is seated at the right hand of God. Set your minds on things that are above, not the things that are on earth. For you have died, and your life is hid with Christ in God” (Col 3:1-3).

Though we find ourselves living in the third millennium after our Lord’s Redemptive Incarnation, and though it is no exaggeration to say that the Gospel had indeed been proclaimed to all the world, we are nevertheless living in a time of diabolical disorientation. Everywhere it seems, the order established by God, even in what pertains to the natural law, is militantly denied and opposed. Political atheism is increasingly a force to contend with even in countries like ours whose Constitution makes explicit reference to God: “Whereas Canada is founded upon principles that recognize the supremacy of God and the rule of law.”

Almost one hundred years ago, at Fatima, in Portugal, the Mother of God, Our Lady of the Rosary appeared to three little children and there issued a clear call to conversion that expresses itself in our personal consecration to the Immaculate Heart of Mary. To Sister Lucia, one of the seers at Fatima our Lady said, “My Immaculate Heart will be your refuge and the way that will lead you to God.” Our Lady also revealed to the children the dire punishments that would befall humanity because of our sinfulness and impiety.

The First Apparition at Fatima occurred just eight days after the entreaty of Pope Benedict XV that the Mother of God intercede for the end of World War I. The Great War as it came to be known, destroyed the false optimism that progress towards heaven on earth was inevitable or even possible but then came along Fascism, Nazism and Communism which between them destroyed millions of lives in a fashion which decades before would have appeared inconceivable. Then came contraception, abortion, euthanasia, and all the other offences against the sanctity of life. Many of the disasters of the twentieth century could be characterized as revolts against civilization itself. This alone, is a sign of the demonic, the chaos of the antichrist.

There is one remedy for us: refuge in the Immaculate Heart of Mary and the Rosary. With our Lady, in the embrace of her loving Heart, we learn to adore the living God especially in His hidden presence in the Blessed Sacrament of the Altar. We learn to repair; with loving hearts and sacrifices and penance to repair for the outrages, sacrileges and indifference by which He is offended; and we learn to imitate God’s tender love for poor sinners. “In the end my Immaculate Heart will triumph.” Our Lady spoke these words at the third of the six apparitions at Fatima. These words should be our consolation and our strength as we seek to adore the living God in Christ and endeavour to bring about the establishment of His Kingdom. May our Lady obtain for each of us the grace of final perseverance, so that “when Christ who is our life appears, then [we] also will appear with him in glory” (Col 3:4).